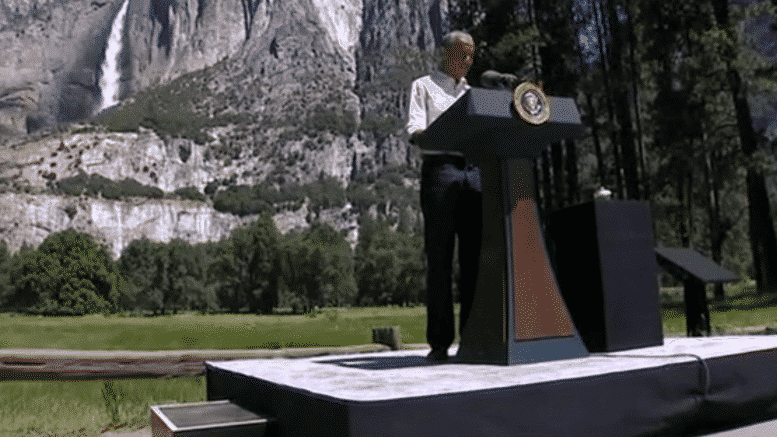 TN Note: The false narrative of climate change is pernicious. Many people easily see through it, but even more accept anything that is said with the word ‘science’ attached to it. In fact, ‘science’ is like a hypnotist’s trigger word to put a subject back into a trance

President Barack Obama used his visit to Yosemite National Park on Saturday to tout his administration’s environmental record and to warn Americans about the dangers of climate change — albeit with false information.

“Fires are raging across the west right now … all while it’s still really early in the season,” he said in a speech at the park, according to the Los Angeles Times.

Obama joins California Governor Jerry Brown in making a spurious connection between wildfires and climate change that scientists have long since rejected.

As Breitbart News noted in October:

Scientists are rebuking California Gov. Jerry Brown over his attempt to link recent California wildfires to climate change. (Even more remarkably, the Los Angeles Times is reporting it.)

However, scientists say Brown is wrong and that the scientific evidence does not link recent fires to climate change.

While fires could become more likely in the future, the link in the present has not been established. False statements like the president’s could, they warn, lead to inappropriate policies.

The president’s statement was only the latest example of climate change hysteria from the president. Earlier this month, he warned that Manhattan would be “underwater” unless action was taken soon on climate change. (Scientists say that some portions of Manhattan could experience flooding, but not the entire island, even under the most catastrophic models.)

Perhaps the drought is caused by geoengineering. I have not validated nor vetted this site so take it with a grain of salt. http://www.agriculturedefensecoalition.org/content/california-skywatch Back in the mid-90’s my company bid on a contract for the military to design a waste water treatment plant for rinse water from air plane based spray tanks. The content of the tanks was not disclosed. Which I thought was odd at the time. Is is well documented that the military has been working on weather modification since the 50’s. The time frame of the RFP is about the time heavy geoengineering efforts began. Research… Read more »

For analysis rising, IMO, to the level of proof of the use of the Geoengineering Programs and multiple Ionospheric Heaters to create the current jet-stream manipulation and droughtification of the Western U.S., see The HAARP Report channel on YouTube: https://www.youtube.com/channel/UCp7xAgrKhcVKEztY_gjlLVQ/videos?spfreload=10

Also, recommend reading Peter Kirby’s excellent series on “The New Manhattan Project” (weather modification), Part 3 is at: http://www.activistpost.com/2016/06/chemtrails-exposed-new-manhattan-project-conclusions.html – Kirby has just released a book his reseach, linked off the page above.