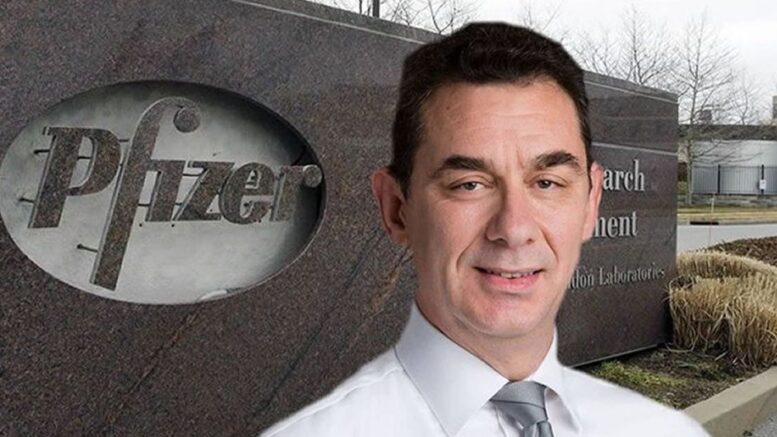 Please Share This Story!
PDF 📄
Bourla is nearly delusional to point the finger at anyone else for misinformation about Pfizer’s COVID shot. He was addressing the super-elitist Atlantic Council, whose Board of Directors is riddled with members of the Trilateral Commission like Henry Kissinger, Joseph Nye and Paula Dobriansky and others.

Furthermore, he blames these “criminals” for costing “millions of lives.” He concluded his remarks with “The only thing that stands between the new way of life and the current way of life is, frankly, hesitancy to vaccinations.” ⁃ TN Editor

Speaking with Washington D.C.-based think tank Atlantic Council, Bourla said there is a “very small” group of people that purposefully circulate misinformation on the shots, misleading those who are already hesitant about getting vaccinated.

“Those people are criminals,” he told Atlantic Council CEO Frederick Kempe. “They’re not bad people. They’re criminals because they have literally cost millions of lives.”

Bourla’s comments come as millions of eligible adults in the U.S. have yet to get vaccinated even though the shots have been available to most Americans most of this year. Public health experts say misinformation is likely playing a large role.

According to a survey published Monday by the Kaiser Family Foundation, more than three-quarters of U.S. adults either believe or aren’t sure about at least one of eight false statements about Covid or the vaccines, with unvaccinated adults and Republicans among those most likely to hold misconceptions.

Another corrupt b….. spouting lies and Damage CONtrol

Bourla is nothing but a drug lord. Only with way more power to hurt people.

Coming from a man whose parents survived the holocaust! according to wiki: He received $21 million in compensation from Pfizer in 2020. I hate anti-Semitism, and I will defend what the Bible says. The Jewish people are in unbelief of their Messiah Jesus, and until they recognize Him they will continue to be blind. But for the rest of mankind who is not Jewish, you to must accept their Messiah Jesus who is both a perfect Jewish man and God 100%.

“They’re criminals because they are literally costing me billions of dollars.”
Big pHarma=Mafia

This claim is called “projection”….attributing to others their own traits to avoid the unpleasantness of themselves, a distortion of reality, today’s real pandemic and nothing but a temporary salve for a problem that can only be truly healed by none other than the perfect “Balm of Gilead…Jesus Christ.

you are the criminal, you maje me sick, come put me in jail because i will not stop, i will resist to the end, your pathetic money means nothing to me .. something you could never understand ..

Agree, he is projecting much? These are the true criminals who bully and blackmail foreign nations to accept their “Death jabs” or else. With a long track record of regulatory malfeasance paid out in legalized fines a fraction of their annual profits which are drops in the bucket the Mega corp is enjoying record gains thanks to the New world order forced injection, depopulation agenda 2030.

Here are the true freaks, the criminals, psychologically muzzled, spiritually dead told up by a 8 year old girl, God bless her.
https://www.thegatewaypundit.com/2021/11/must-watch-2nd-grader-suspended-38-times-not-wearing-masks-tells-school-board-hopes-go-jail/

The arrogance of eugenists is just more insanity.
They are a sick bunch of murderers plain as it gets.

And with all that arrogance, you will never hear them
brag about how better of a healthy human they are
because they’ve taken their own medicine…

Its always just how good it is for the rest of humanity.
LoL. Ya right!

“The only thing that stands between the new way of life and the current way of life is, frankly, hesitancy to vaccinations,” he said.”

Exactly WHAT NEW WAY OF LIFE is that you creepy, creepy man? Hmmmm? Detail that you profiteering asshole and we can all go home.

sharon a
Reply to  elle

elle
Reply to  sharon a

Exactly. I’ll check out your link.

listen here you bottom feeder, you have some nerve making a public statment like this . It takes a special kind of creep to be so bold. Mis-information here is a great idea why dont you prive to me that its misinformation. Lets make a deal, if you can prove it then i will go to jail, if i destroy you and i prove you are the one pushing mis information and all out lying, and you injections are garbage, rhen you go to jail and all this 💩 is done… do we have a deal goof…

If that was possible, I would bet a lot of money that this 21st century nazi is NOT jabbed.

This scumbag is a MAFIA LORD