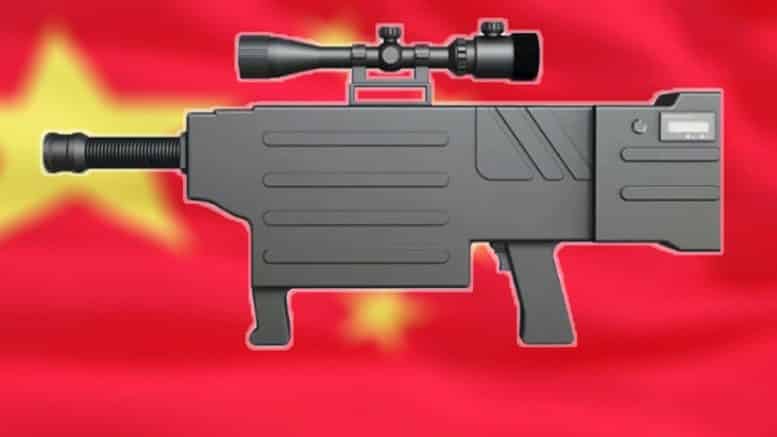 Please Share This Story!
PDF 📄
China is the land of Technocrat inventors who support the ‘science of social engineering’ and controlling the population is central to the mission. Citizens are already tracked 24×7 by cameras equipped with facial recognition and ranked by social credit scoring systems. Dissent will not be tolerated. ⁃ TN Editor

A Chinese firm has developed a laser gun designed for police use that can set fire to protesters’ hair or banners from a range of almost one kilometre.

The general manager of the ZKZM fiber laser company, who asked to remain anonymous, said the weapon would “immediately” produce a “strong pain response” in the target but stressed it was designed to be “non-lethal”.

“It is not designed explicitly for killing like a gun that uses bullets and cannot cause the ‘instant carbonisation’ of human skin and tissues,” he added.

The 15-mm calibre weapon weighs three kilogrammes (6.6 pounds), has a range of 800 metres (2,600 feet) and can pass through glass and other transparent obstacles.

It can be mounted on cars, boats and planes, the firm said, adding that it was “seeking a partner that has a weapons production licence or a partner in the security or defence industry to start large-scale production”.

It is “mainly expected to be for Chinese police use”, the manager told AFP.

He said it would need to be upgraded to a “laser cannon” — with increased power — to become lethal and confirmed his firm was working on such a weapon.

Just what this sick world needs. Not!

All of these directed energy weapons are falsely labeled as non-lethal. They are all lethal. We are living in a heinous secret pol.ice state. Wake up people. These weapons are already in the u.s. for decades and in secret use via state fusion center DHS networks of covert gov’mnt three letter agencies, state police, local police, first responders, & their paid to participate criminal gangs to illegally target & terrorize people. cyber-torture.com targetedamerica.com targetedjustice.com

Coming soon to a police force near you!