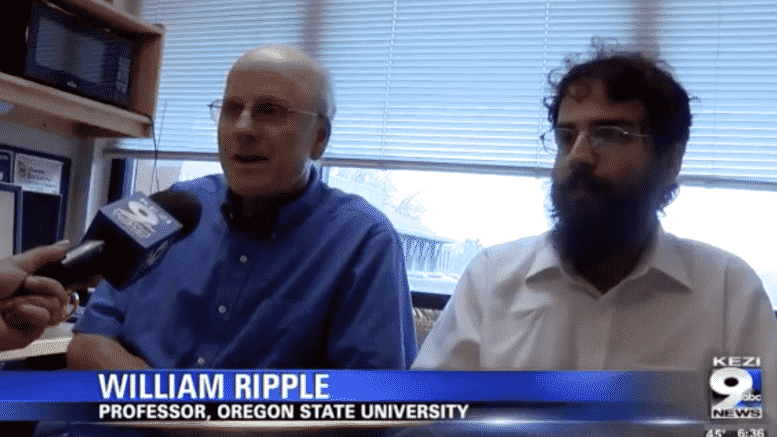 Please Share This Story!
PDF 📄
Delusion results from deception when rational facts that expose the deception are rejected and ignored. Increasing numbers of scientists are hardened in the cult of delusion, and if there is imminent danger to the world, it is they.

“Scientists have a moral obligation to clearly warn humanity of any catastrophic threat and ‘tell it like it is.’ Based on this obligation and the data presented below, we herein proclaim, with more than 10,000 scientist signatories from around the world, a clear and unequivocal declaration that a climate emergency exists on planet Earth.”

Will there be “untold human suffering” if humans do not stop having children in order to avoid a “climate emergency?” More than 11,000 scientists signed a paper authored by an ecology professor at Oregon State University making that case.

OSU’s William Ripple and Christopher Wolf, a postdoctoral research associate at OSU (left and right, below), were the lead authors of the paper “World Scientists’ Warning of a Climate Emergency,” published in the journal BioScience.

Their call to “reduce the world population” is among six solutions. “We need to reduce fertility rates through voluntary family planning,” Ripple told The College Fix in an email.

The paper cites “proven and effective policies” that can help reduce the population in order to “strengthen human rights.”

They include access to family planning services for everyone, “full gender equity” and giving everyone “primary and secondary education,” especially women.

“We believe that prospects will be greatest if decision makers and all of humanity promptly respond to this warning and declaration of a climate emergency, and act to sustain life on planet Earth, our only home,” the paper states.

Ripple maintains a website called “Alliance of World Scientists,” where he encourages scientists to read his paper and sign his petition to show “that you generally agree with our article.”

The alliance has 15,000 members from 175 different countries, according to the website. While it claims to vet those who seek membership, the alliance specifically seeks “scientists from any scientific discipline, including graduate students in the sciences.” It makes no mention of requiring an institutional affiliation.

Ripple’s attempt to persuade leaders to implement his agenda stands in contrast to the approach recently favored by Ivy League students. They made themselves a nuisance at the Harvard-Yale football game, delaying it for an hour, in order to protest climate change.

This isn’t the first warning Ripple has issued about climate change in a paper. In 2017, he was the lead author of “World Scientists’ Warning to Humanity: A Second Notice,” which drew more than 15,000 signatures from 175 countries, according to the website.

Ripple’s most recent paper claims that the climate crisis is threatening “the fate of humanity” and everyone has an “urgent need for action.” It cites six areas that need to be addressed: energy, short-lived pollutants, nature, food, economy and population.

“I think we need to transform how society functions and interacts with nature,” Ripple told The Fix in an email. “We need to address social justice issues and honor the diversity of humans around the world. I see this transformation leading to a new carbon-free economy and operating within the limits of the biosphere.”

Dr. Ripple:
Exactly WHAT are you suggesting humanity use that RELIABLY works on a worldwide scale and can replace carbon fuels for ALL areas of living–travel, heating, cooling, storage and transit of food stuffs, et al? I’d love to know. If you can answer that question with a real answer and not some woo-woo theoretical paper you can have my full support.

(This so puts me in mind of Nazi Germany’s intellectuals who did the most to support Hitler and bring him to power through willful ignorance. They, too, were united in their ‘beliefs’.)