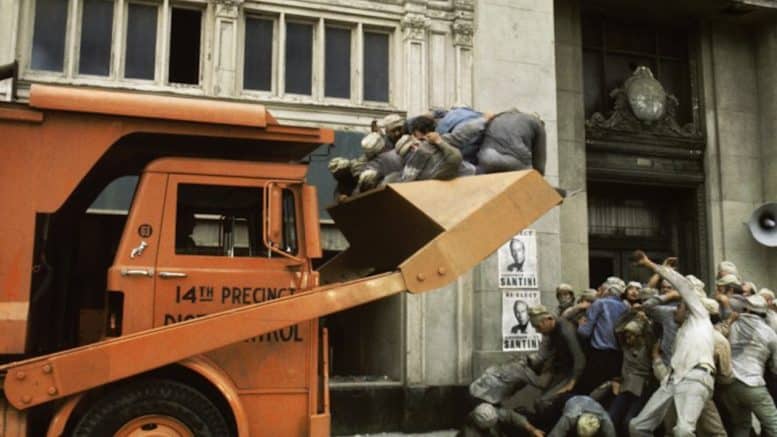 Oftentimes, the climate alarmists are their own worst enemy. It sounds reasonable enough that carbon emissions might have an impact on the climate, but it’s a rather nasty thing to prove, especially when alarmist predictions fail, over and over again. It’s far from the “scientific consensus.” But the alarmists don’t tone down their rhetoric — they ratchet it up to 11. They want to take away your plastic straws, your cars, your burgers. Then there’s this behavioral scientist in Sweden who wants us to eat human flesh to deal with the effects of climate change.

No, this isn’t The Onion or The Babylon Bee. This is a Swedish professor appearing on Swedish television advocating for cannibalism, because climate change is just that dire. It can’t be lunacy if it’s done in the name of climate change, can it?

Earlier this week, Magnus Söderlund, professor of marketing and strategy at the Stockholm School of Economics, spoke at the Gastro Summit, a discussion on the future of food in the case of a climatepocalypse, The Epoch Times reported.

Söderlund spoke on the topic, “Can you Imagine Eating Human Flesh?” He argued for breaking down the ancient taboos against desecrating the human corpse and, well, cannibalism. The clip is available on State Swedish Television channel TV4 at this link. The end of the video’s description roughly translates to “the possibility of eating human flesh – to save the climate.” How cannibalism would have any impact on the climate is anyone’s guess, and it seems the professor is more focused on dealing with the aftereffects of climate change, anyway.

According to The Epoch Times, Söderlund dismissed taboos against cannibalism as “conservative.” He suggested that people’s resistance to eating human flesh “could be overcome, little by little, beginning with persuading people to just taste it.” In the video, he warned “that since food sources will be scarce in the future, people must be introduced to eating things they have thus far considered disgusting—among them, human flesh.”

While the professor also discussed breaking other taboos on eating pets and insects, his talk focused on cannibalism. Swedish articles on the debate use the term “mannisko-kötts branschen,” which translates to “the human flesh industry.”

According to his bio, Söderlund’s research focuses on “consumer behavior,” “reactions to marketing stimuli,” “psychological reactions,” and “our understanding of what it means to be a consumer (and a marketer) in a society increasingly obsessed with consumption.”

Taking this psychological approach, the professor said that people can be “tricked” into “making the right decisions.”

Söderlund appeared to equate resistance to cannibalism with capitalist selfishness. “Are we humans too selfish to live sustainably?” he asked.

When asked if he would try eating human flesh, Söderlund said, “I feel somewhat hesitant but to not appeal overly conservative… I’d have to say… I’d be open to at least tasting it.”

Even if cannibalism were not grotesque, it would still be unhealthy. The Fore people in Papua New Guinea practiced ritualistic cannibalism. The women in the tribe would eat the human flesh of their dead relatives — so that worms and maggots did not eat it. The women — and some children — started dying of kuru, a disease meaning “shivering” or “trembling.”

Preparation for what’s coming. Seems the movies have all been prophetic. Pre conditioning for what is coming, Satan is using people to do his will. Zombies and cannibalism. The Bible is 1/3 prophetic yet most reject it just like in the days of Noah. No one believed him either and perished, but we must try. People judgment is coming from God Almighty and you will not escape unless you accept the fact that you are a sinner and the 10 commandments prove it. Jesus who is God became a man to die for you. He loves you. For God so… Read more »

Neo-cannibalism not only promoted by a Swedish professor but also Swedish state television does it:

SVT aired on September 3 a TV show called “Ask Lund” where distinguished academics and professors answer scientific questions. The question of cannibalism was brought up, and a reporter asked people on the street what part of the body they would prefer to eat if they had to…later they discussed details about human flesh.

Seems that the world is on a promotional guide for cannibalism. Read that people gain disease immunity from the practice. I would rather pass over from hunger thank you.