Please Share This Story!
PDF 📄
Technocrat-inspired mandates for lockdowns, social distancing and face masks are all being proven not only useless for stopping COVID-19, but demonstrably harmful in the number of deaths produced. They will never be held accountable. ⁃ TN Editor 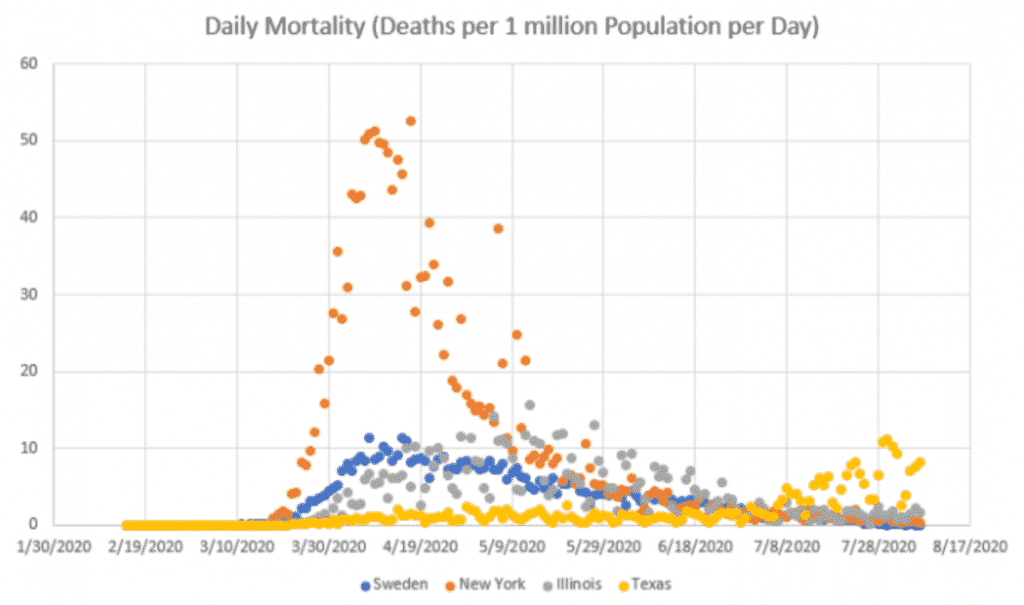 Sweden (blue dots) has served as a control group to compare policies intended to decrease deaths from covid-19. Sweden has been unfairly criticized for its policy despite having an outcome more favorable than places with authoritarian lockdown policies. Sweden did not close its schools. Other than stopping gatherings of more than fifty people, the Swedish government left decisions of closing businesses, using masks, and social distancing to the Swedish people. The government encouraged the use of masks and social distancing, but there were no requirements and there were no penalties for those who declined to follow the advice. Mortality attributed to covid-19 hit a peak value of 11.38 deaths per day per million population on April 8, 2020. This mortality was matched on April 15, and mortality has decreased since then. Daily mortality has been less than one death per day per million population for the previous eighteen days. Cases are very low. For all practical purposes, the covid-19 epidemic is over in Sweden. Almost certainly herd immunity has been achieved in Sweden irrespective of any antibody test results. Testing is usually only for IgG antibody and the herd can become immune via IgA antibody or cellular mechanisms that are not detected by the usual testing. Whether covid-19 will reappear this next fall or winter remains to be seen.

New York: Locking the Barn Door Shut after the Horse Has Already Left

New York (brown dots) has been a catastrophe. On March 20, 2020, a full lockdown was implemented. Nonessential businesses were ordered to close. Workers in nonessential businesses were ordered to work only from home. Pharmacies, grocery stores, liquor stores, and wine stores were deemed to be essential and allowed to remain open. Restaurants and bars could only deliver to homes. In addition to the lockdown, nursing homes were ordered on March 25, 2020, to accept patients positive for the covid-19 virus in transfer from hospitals. On May 10, this order was changed such that patients had to test negative for the virus before being transferred to nursing homes, but the damage had already been done. By April 7, 2020, within three weeks of the nursing home order, a daily mortality of over fifty deaths per day per million population had been reached. This daily mortality rate was almost five times the peak rate observed in Sweden, where no lockdown was implemented.

The New York policy assumed that all human interactions carry the same risk of death by covid-19. The New York data clearly shows that interactions among young and healthy people have a much different risk than interactions between the young and elderly and interactions among the elderly. By facilitating the transmission of the virus from hospitals to nursing homes, the rate of spread within the elderly population was maximized, and any possible benefit from lockdown of the young and healthy population was rendered moot. The general population was kept locked down after the virus had been broadly disseminated among the elderly population. The decline of deaths from the peak levels in New York, with its harsh lockdown, has followed roughly the same time course as what has been observed in Sweden without any lockdown. It is unclear whether the lockdown interfered with herd immunity or not. This will not be known until after the economy and schools are completely reopened for at least a month.

Illinois (gray dots) has more subtle differences from Sweden than does New York. Illinois also implemented a harsh lockdown on March 20, 2020. There was no nursing home order as in New York. The daily mortality rate increased more slowly than it did in New York and Sweden, reaching a peak of over fifteen deaths per day per million population on May 17, 2020. The daily mortality has declined more slowly than it did in New York and Sweden, and it remains significantly higher than the rates in those places. The most likely explanation for the Illinois data is that the lockdown did indeed slow the rate of transmission among the young and healthy but also allowed a longer time for transmission from young people to elderly people. The lockdown appears to have made more deaths from covid-19 in Illinois than would have occurred without it. Almost certainly herd immunity has not been achieved and will not be achieved until the schools and economy are reopened.

Texas: The Ox Is Slow, but the Earth Is Patient

Texas (gold dots) had very few deaths following a less harsh lockdown than was implemented in New York and Illinois. Nonessential businesses were closed on March 31. Outdoor activities were permitted. Social distancing was advised but not required. Governor Abbott was criticized for not squeezing hard enough, but predictions that Texas health care would be overwhelmed by late April failed to materialize. Texas appeared to be a success story, with a much lower mortality, and the state began a phased reopening of the economy on May 1, 2020. By late June, however, cases of covid-19 were increasing and the daily mortality rate was creeping up. The general reopening was paused, and some relaxations of measures were rescinded on June 26, 2020. The Texas daily mortality rate hit a peak of over ten deaths per day per million population on July 31, 2020. The Texas mortality peak is almost bad as the peak rate seen in Sweden, but Texas still has a largely closed economy. Texans are debating whether schools should be reopened or not. Sweden does not have to worry about its schools, because it never closed its schools. Texas will eventually have to reopen its schools and economy. It would appear that covid-19 deaths were deferred rather than prevented by the lockdown. Although the overall covid-19 mortality is lower in Texas (293 deaths per million population) than in Sweden (570), the current daily mortality in Texas is much higher than in Sweden, so covid-19 mortality in Texas may catch up to Sweden over the next 30–60 days. Furthermore, the situation in Texas will likely get worse when the schools and economy are reopened, as they eventually must be. Like the ox and the Earth, the lockdown slowed the transmission of the virus among the young and healthy, but the virus appears to be very patient and will spread when it is able to.

The data suggest that lockdowns have not prevented any deaths from covid-19. At best, lockdowns have deferred death for a short time, but they cannot possibly be continued for the long term. It seems likely that one will not have to even compare economic deprivation with loss of life, as the final death toll following authoritarian lockdowns will most likely exceed the deaths from letting people choose how to manage their own risk. After taking the unprecedented economic depression into account, history will likely judge these lockdowns to be the greatest policy error of this generation. Covid-19 is not going to be defeated; we will have to learn how to coexist with it. The only way we can learn how best to cope with covid-19 is to let individuals manage their own risk, observe the outcomes, and learn from mistakes. The world owes a great debt to Sweden for setting an example that the rest of us can follow.

This whole lockdown was not to actually stop the spread, it was to do major harm to the economy and ruin the Trump recovery! It also allowed the “elite” to make a huge leap in their quest to control the populace. This farce has produced the greatest population of compliant sheep in the history of America. A frightened population is a controlled population!!

Is there a common source for tracking technologies?