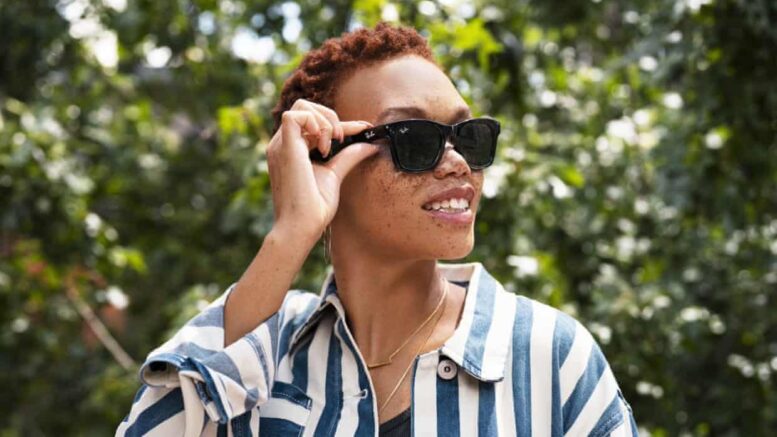 Please Share This Story!
PDF 📄
TN can’t wait to see the “terms of service” and operational features on Facebook’s new spy glasses. Will they automatically turn off when you enter a restroom? A biker bar? Will they be hacker-proof? Will Facebook promise to never turn on the camera or microphone without your knowledge? Will Facebook scan all your images for criminal behavior?  ⁃ TN Editor

Facebook lives in your pocket, on the web, and, if you’ve bought the company’s Portal video-calling device, even in your kitchen. Now, it wants to find a home on your face.

The company has created its first “smart glasses”, with a pair of cameras to take photos and videos, a microphone and speaker to listen to podcasts, and a voice assistant to let you do the whole thing hands-free.

If the whole thing sounds, and looks, familiar, it’s because the concept bears a heavy resemblance to Snapchat’s Spectacles, now in their third generation. It’s not the first time Facebook has been heavily inspired by the younger company, and even the name of the glasses feels sure to rub salt into the wound: they’ve been named Stories, apparently in homage to the social media format invented by the Snapchat founder, Evan Spiegel, and adopted to revolutionary effect by, first, Instagram, then countless other sites on the internet.

There’s one final wrinkle to the pitch: the glasses don’t actually come from Facebook at all. Instead, the company is working with Ray-Ban, on whose classic Wayfarer designs the hardware has been modelled, and the device will be branded as a Ray-Ban product first and foremost.

“Our mission is to help build tools that will help people feel connected any time, anywhere,” said Facebook’s Monisha Perkash. “We want to create a sense of social presence, the feeling that you’re right there with another person sharing the same space, regardless of physical distance.”

Perkash leads the product team at the company’s Reality Labs division, which has the ultimate goal of building true “augmented reality” glasses – devices that would deliver on the promise – which Google Glass failed to meet – of putting a digital layer over reality itself.

Ray-Ban Stories aren’t that, yet. Instead, Perkash said, “as we wait for the technology to be good enough, we’re focused on what we can enable right now. We’re delivering the first pair of smart glasses that blend form and function.”

Andrew Bosworth, the Facebook executive who heads up Reality Labs, said the glasses were “designed to help people live in the moment and stay connected to the people they are with and the people they wish they were with. [Ray-Ban] has been nothing short of stellar in this partnership and through their commitment to excellence we were able to deliver on both style and substance in a way that will redefine the expectations of smart glasses.

“We’re introducing an entirely new way for people to stay connected to the world around them and truly be present in life’s most important moments, and to look good while doing it.”

Facebook has been able to fit an impressive amount into a frame just a few millimetres thicker and five grams heavier than a standard pair of Wayfarers. Each wing of the glasses hides a camera, which combine to shoot five megapixel still images and video of up to 30 seconds with a long or short tap of the device’s only button. So far, so similar to Snap’s Spectacles, but the Ray-Ban Stories also feature open-ear speakers to listen, and a “three-microphone audio array to deliver rich voice and sound transmission for calls and videos”. Those microphones also let the glasses be controlled by voice, for a hands-free experience.

Nice tech, but yea, we can’t really trust anything from FB or Google and expect our privacy to be respected. I’ll wait for the non-FB version, shouldn’t be long.