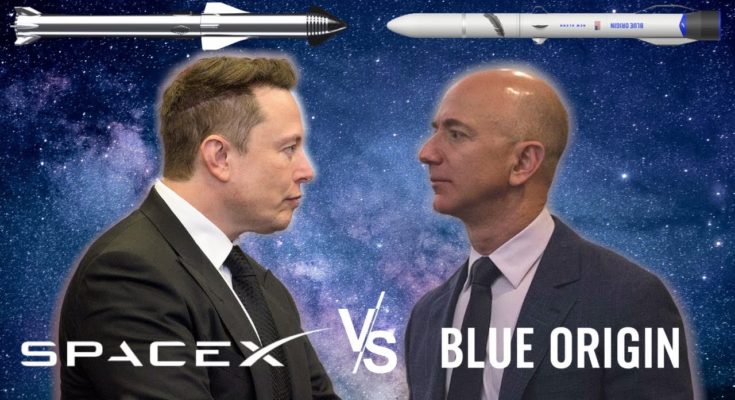 Posted By: Christian Davenport via The Washington Post September 10, 2021

Please Share This Story!
PDF 📄
Bezos, a consummate Technocrat, is the richest man on earth and Elon Musk is right behind him. However, Musk is a pedigreed Technocrat who was steeped in Technocracy from birth: his grandfather was the head of the Technocracy movement in Canada during the 1930s and 1940s before moving to South Africa. ⁃ TN Editor

For years, Jeff Bezos and Elon Musk have sparred over the performance of their rockets and space companies in a simmering feud that flared during a fight over who could use a NASA launchpad and which company was the first to successfully land a rocket.

But now the two billionaires, among the world’s richest men, are waging an increasingly bitter battle that pits two enormous business empires in clashes that are playing out in the courts, the Federal Communications Commission and the halls of Congress in what’s become one of the greatest business rivalries in a generation.

What began as a fight between Musk’s SpaceX and Bezos’s Blue Origin space company over a major NASA contract to land astronauts on the moon now also encompasses a race to build an Internet satellite service in space.

That fight has become especially bare-knuckled and personal. (Bezos owns The Washington Post.)

For the past couple of years, SpaceX has been launching a constellation of satellites that could reach well into the thousands, intended to beam Internet signals to earth. Amazon has a similar plan with a program it calls Kuiper, which has yet to launch a single satellite.

On Aug. 25, Amazon challenged a SpaceX application to the FCC to modify its plan, saying the modification would violate the FCC’s rules. Six days later, SpaceX responded. It didn’t mince words.

Openly dismissive of Amazon’s technical ability, SpaceX accused the company of trying to delay SpaceX’s efforts to make up for its own failures. Amazon’s track record, SpaceX said, “amply demonstrates that as it falls behind competitors, it is more than willing to use regulatory and legal processes to create obstacles designed to delay those competitors from leaving Amazon even further behind.”

On Wednesday, Amazon fired back, accusing Musk of openly defying lawful regulations time and again. “The conduct of SpaceX and other Musk-led companies makes their view plain: rules are for other people, and those who insist upon or even simply request compliance are deserving of derision and ad hominem attacks,” Amazon said in its filing with the agency.

On Thursday, SpaceX filed anew. “Another week, another objection from Amazon against a competitor, yet still no sign of progress on Amazon’s own long-rumored satellite system,” its letter to the FCC began.

For decades, American enterprise has been built on fierce competition between titans of industry, from the days of Andrew Carnegie and John D. Rockefeller more than a century ago. Now Musk and Bezos are writing a new chapter focused on space — a sector romanticized by popular culture and nostalgia for the 1960s Apollo era but that has emerged in recent years as one of the most exciting industries with the potential for enormous growth.

Both Bezos and Musk portray their space ambitions as a way to help humanity — by creating a city on Mars, as Musk would like, or building colonies in Earth’s orbit, as Bezos envisions. But space is also a huge business opportunity, said Margaret O’Mara, a professor at the University of Washington, who is the author of “The Code: Silicon Valley and the Remaking of America,” a history of the technology era.

Give me a break. This is a battle of intelligence against ego. There is no need to be more specific.