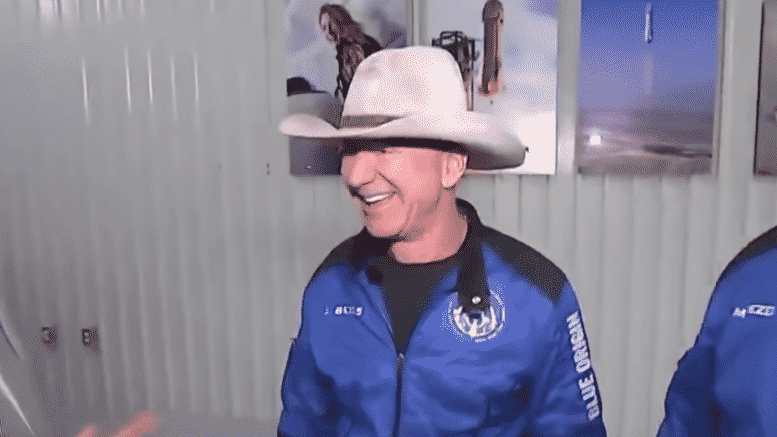 Please Share This Story!
PDF 📄
The ultra-rich founder of Amazon, Jeff Bezos, wants to move humanity into outer space in order to save the world for a giant Yellowstone-like park to be visited while on earth leave. The Technocrat space cult is clearly articulating its insane ideology. ⁃ TN Editor

Renowned conservationist Jeff Bezos has shared his vision for planet Earth. It’s not enough to protect it for the humans living here. No. Instead, according to the second-richest man on this planet, future generations “will visit Earth the way you visit Yellowstone National Park.”

It turns out while we’ve all been playing checkers talking about space tourism, Bezos is playing 3D chess. Everyone’s focused on billionaires sending people to the edge of space. But Bezos’ grand plan is actually to send all of humanity into space with the chance to revisit Earth like so many tourists hit the national parks each summer.

The remarks came last week at an event held at the National Cathedral in Washington, DC, with NASA Administrator Bill Nelson and others talking about space policy. Bezos sat down for a one-on-one chat with Adi Ignatius, the editor-in-chief of the Harvard Business Review. He brought up themes we’ve heard before, including his vision that all polluting industries will exist in space one day and that we’ll all live on space colonies that could, in his estimation, support 1 trillion people. But he expanded on his vision in greater detail about what, exactly, will happen to the planet we’ll all leave behind for Blue Origin-branded space colonies.

At United Nations climate talks a couple of weeks ago, Bezos upped his pledge to conservation to a total of $3 billion of his $10 billion Earth Fund. Speaking with Ignatius, he said he doesn’t view that money and Blue Origin as two separate things but rather a “duality.”

“We need to conserve what we have, restore what we’ve lost,” he said. “This planet is so small, if we want to keep growing as a civilization, using energy as a civilization, most of that needs to be done off-planet. … This place is special. You can’t ruin it.”

To do that will require us all to live in space colonies. That would leave Earth to eventually be, in Bezos’ vision, a place for future folks to visit but not live. “They may visit Earth the way you visit Yellowstone National Park,” Bezos said. Ignatius asked a follow-up about who gets to live on Earth in this vision, which Bezos did not answer. (Which is unfortunate because I would love to know!)

It’s extremely telling that Bezos’ vision for the future of Earth is Yellowstone National Park, a place that people visit rather than live. As a former park ranger, I am contractually obliged to say national parks are cool and good. But they’re also an extremely Western construct of what constitutes “natural.” Yellowstone became a park because Americans were busy rapaciously exploiting the West as part of the whole Manifest Destiny project to colonize the region. Today, nobody outside park rangers and staff live within the park’s borders and there are strict rules that prohibit hunting and taking any resources from the park.

Bezos is a Godless human who thinks he himself is God so he can make such decisions for little people. It always has been a war between Bezos and DJT and the common man, just us little minions have been too blind to see. He controls supply chains, food and pharma.

IT is not Human.

I would love to launch Jeff Bozo into space, never to be seen again! WHO in their RIGHT MIND would WANT to live on the other planets in our solar system?! I love THIS planet! All of the Socio/Psycho’s (the ‘elites’) poisoning us/animals/the planet can LEAVE. Don’t individuals realize, that once you leave THIS planet, you are subject (a slave) to ‘their’ rules/’laws’?! If you think that life is ‘hell’ on THIS planet, wait until you are on another, and under their TOTAL control!! I envision slaves, deep underground, mining their ‘Precious Metals’….til you drop dead; literally. ‘Anything Goes’, on… Read more »

Why should anybody even bother listening to what this jumped-up little spiv has to say about anything? The way he treats his own employees reflects his true, contemptuous feelings about his fellow humans, and no amount of tossing his ill-gained helicopter money at charitable causes to offset his obscene profits from cheap labour will persuade any thinking individual otherwise.

He stole that line from the George Castanza character on Seinfeld.