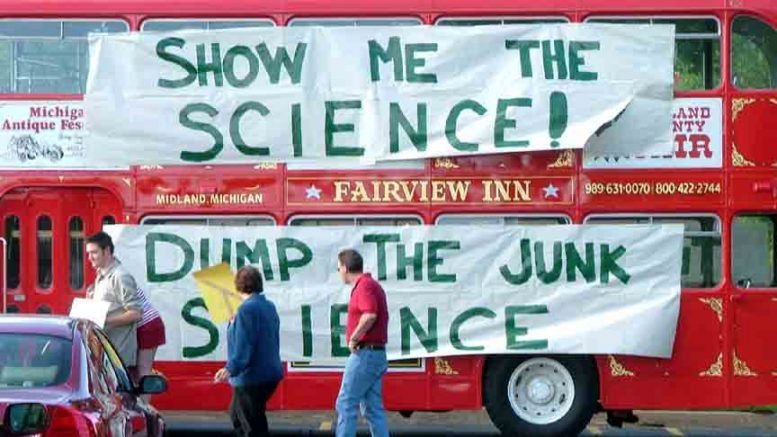 Once junk science is accepted as truth, its application knows no boundary, whether climate change, biodiversity, ‘earth science’ or Sustainable Development. Junk science is a scourge to mankind and the planet. ⁃ TN Editor

Caitlyn Jenner has perfected the art of cashing in on each step of gender transition. A few short weeks before the release of his new book, Jenner acknowledges the boys are now gone. Adios to his life-long companions in gender reassignment surgery (known as bottom surgery).

Jenner is wealthy and can cash in on celebrity, but a large portion of the transgender population remains lost and unaccounted for. Did they die, detransition, or commit suicide?  All we know is the attempted suicide rate for transgender people has remained above 40 percent for many years.

Doctors jam trans kids with puberty blockers and trans adults with cross-gender hormones, then recommend irreversible genital surgery, all without having long-term systematic studies of the effectiveness of such invasive treatment. Parents of trans kids don’t have the benefit of trustworthy information on the probable outcomes of up to 90 percent of gender changers.

Research about transgender people is biased toward reporting success. Studies lose track of many participants, often the majority, and there is no mechanism for tracking those who are dissatisfied after gender-change treatment. My transition back to male hasn’t been tallied in the negative column of any study. Ditto for the trans people who reach out to me.

Huge Numbers of Study Subjects Are Lost to Follow-Up

One limitation of long-term transgender research is that many participants who were present at the beginning of the study can’t be located at its end. In medical parlance, they are “lost to follow-up.” A 2007 textbook titled “Principles of Transgender Medicine and Surgery” explains the limitations of the studies: “A large proportion of patients (up to 90%) are lost to follow up… [which]…complicates efforts to systematically study the long-term effects of gender reassignment surgery.”

Another review of more than 100 international medical studies of post-operative transsexuals conducted in 2004 by the University of Birmingham’s aggressive research facility, Arif, warned “the results of many gender reassignment studies are unsound because researchers lost track of more than half of the participants. For example, in a five-year study of 727 post-operative transsexuals published last year, 495 people dropped out for unknown reasons.”

Since the scientific community reports up to 90 percent of transsexuals are lost to follow-up and therefore not counted in study results, I’m skeptical when I hear the LGBT soundbite that says only a tiny percentage are dissatisfied after changing gender. The missing 90 percent could have given up on gender change and gone back to their birth gender or even committed suicide. No one knows, because they dropped out of sight. Too many hormones, too much surgery, and too many are lost.

Media reports about transgender outcomes is also biased positive because the research is also. Arif found “most of the medical research on gender reassignment was poorly designed, which skewed the results to suggest that sex change operations are beneficial.” Arif also reported “no robust scientific evidence that gender reassignment surgery is clinically effective.”

None of the people who have contacted me over the past 11 years about going back to their birth gender will be counted as having undesirable outcomes. That’s because the LGBTQ studies purposefully exclude anything that would reflect badly on their overblown trans agenda.

Sex Changes Have Been Unsound Since Their Inception

From the start, the effectiveness of treating transgender people by affirming their non-biological identity was based on falsified evidence. Dr. Harry Benjamin will be known as the founder of transsexualism, but the real madness we see today reflects the legacy of Dr. John Money, a psychologist. During his time at Johns Hopkins University Hospital in the 1960s and ‘70s, Mooney launched the tragic trajectory of surgical transgenders, suicides, and regrettable outcomes.

Money made a name for himself with research on a set of twin boys, one of whom had his penis ruined in a botched circumcision. When the boy’s distressed parents contacted Money for help, he saw an opportunity to conduct research on the cultural versus biological determinants of gender. Money recommended that doctors remove the remnants of David’s injured genitalia and his parents raise him as a girl. They followed Money’s advice, and at the age of two David Reimer became Brenda.

Over the years, Money met with the Reimer twins and wrote articles touting the success of his gender experiment and how well Brenda was adapting. His results fueled the acceptance of gender reassignment in the medical community.

The problem was, Money fabricated the results. The truth didn’t come out until the twins were in their 30s. David had been suffering for most of his life from severe depression, followed by financial instability and a troubled marriage. Money withheld information the medical community and public needed to know about gender reassignment, and replaced it with lies.

When David Reimer and his twin brother broke their silence, they exposed Money as a fraud and pedophile. They told how Money had taken photos of them together naked in sexual poses when they were only seven years of age. Money did not stop with snapping photos. The twins described sexual abuse, saying Money forced them to engage in incestuous sex play with each other while he watched.

The twins’ outcome was grim. David died of suicide at age 38, and his brother died a few years later of a drug overdose. This foundation of gender reassignment surgery was based on fraudulent, fabricated research, and this form of treatment all too frequently ends in suicide or suicide attempts.