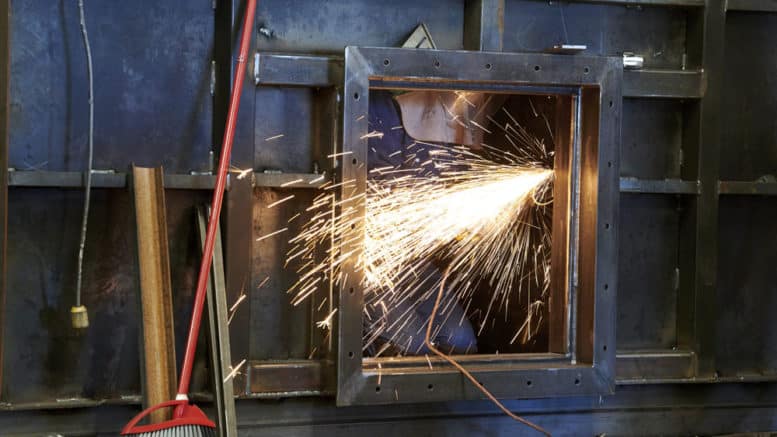 Building a bunker at Rising S factory in Murchison, Texas

The super-rich like Peter Theil and Sam Altman, have packed their bug-out bags and are ready to flee to their underground hideaways in New Zealand on a moment’s notice. They expect and fear Armageddon and are taking every precaution to save their own skins, even though they are all complicit in the future we don’t want. ⁃ TN Editor

Years of doomsday talk at Silicon Valley dinner parties has turned to action.

In recent months, two 150-ton survival bunkers journeyed by land and sea from a Texas warehouse to the shores of New Zealand, where they’re buried 11 feet underground.

Seven Silicon Valley entrepreneurs have purchased bunkers from Rising S Co. and planted them in New Zealand in the past two years, said Gary Lynch, the manufacturer’s general manager. At the first sign of an apocalypse — nuclear war, a killer germ, a French Revolution-style uprising targeting the 1 percent — the Californians plan to hop on a private jet and hunker down, he said.

“New Zealand is an enemy of no one,” Lynch said in an interview from his office in Murchison, Texas, southeast of Dallas. “It’s not a nuclear target. It’s not a target for war. It’s a place where people seek refuge.”

The remote island nation, clinging to the southern part of the globe 2,500 miles off Australia’s coast, has 4.8 million people and six times as many sheep. It has a reputation for natural beauty, easy networking, low-key politicians who bike to work, and rental prices half those of the San Francisco Bay Area. That makes it an increasingly popular destination not only for those fretting about impending dystopia, but for tech entrepreneurs seeking incubators for nurturing startups.

“It’s become one of the places for people in Silicon Valley, mostly because it’s not like Silicon Valley at all,” said Reggie Luedtke, an American biomedical engineer who’s moving to New Zealand in October for the Sir Edmund Hillary Fellowship, a program created to lure tech innovators.

Luedtke, 37, said people in California have asked him if he’s relocating as part of a doomsday contingency plan, because “that’s what the country is known for.”

Such notoriety has made New Zealand’s isolation, once deemed an economic handicap, one of its biggest assets. The nation allows emigres to essentially buy residency through investor visas, and rich Americans have poured a fortune into the country, often by acquiring palatial estates.

The Investor Plus Visa, which requires a minimum investment of NZD$10 million ($6.7 million) over three years, attracted 17 U.S. applicants in fiscal 2017, after President Donald Trump’s election. Previously, it averaged six applicants a year.

More than 10 Americans from the West Coast have bought multimillion-dollar properties in the Queenstown region in the past two years, said Mark Harris, managing director of the local Sotheby’s real estate office.

In August, partly in response to Americans gobbling up swaths of prime real estate, New Zealand’s government banned foreigners from buying homes, with the restrictions set to take effect in coming months.

Peter Thiel, the billionaire co-founder of PayPal, ignited an uproar when he was granted citizenship after spending just 12 days in the country, prompting allegations that New Zealand’s passport was for sale. Thiel, 50, owns a $13.8 million home on 477 acres (193 hectares) in the lakeside town of Wanaka, with views of snow-capped mountains, and purchased another property in Queenstown, outfitted with a safe room.

“If you’re the sort of person that says ‘I’m going to have an alternative plan when Armageddon strikes,’ then you would pick the farthest location and the safest environment — and that equals New Zealand if you Google it,” former Prime Minister John Key said in a phone interview.

“It’s known as the last bus stop on the planet before you hit Antarctica,” he said. “I’ve had a lot of people say to me that they would like to own a property in New Zealand if the world goes to hell in a handbasket.”