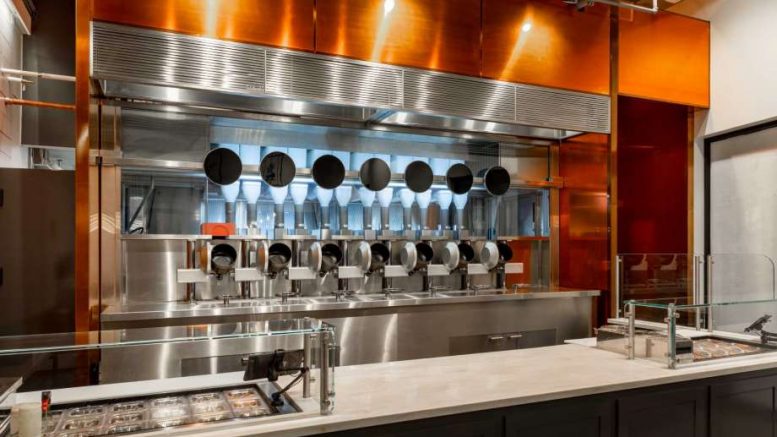 Robotics threatens to disrupt the entire food service industry by replacing both waiters and cooks. Their is no wisdom associated with this endeavor since ethical discussion is not part of the Technocrat mind. Other industries face a similar disruption simply because someone ‘can’. ⁃ TN Editor

The debate about whether cooking is more art or science is a never-ending one.

But at Spyce, the latest culinary experiment in automation, that debate feels pretty well settled.

Started by a group of 20-something robotics engineers from Massachusetts Institute of Technology who partnered with Michelin-starred chef Daniel Boulud, the new restaurant in downtown Boston is founded on the idea that a fulfilling meal can be more science than spontaneity.

The restaurant’s founders have replaced human chefs with seven automated cooking pots that simultaneously whip up meals in three minutes or less. A brief description of meal preparation – courtesy of 26-year-old co-founder, Michael Farid – can sound more like laboratory instructions than conventional cooking.

“Once you place your order, we have an ingredient delivery system that collects them from the fridge,” Farid said. “The ingredients are portioned into the correct sizes and then delivered to a robotic wok, where they are tumbled at 450 degrees Fahrenheit. The ingredients are cooked and seared. And once the process is complete, the woks tilt downward and put food into a bowl. And then they’re ready to be garnished and served.”

Spyce bills itself as “the world’s first restaurant featuring a robotic kitchen that cooks complex meals,” a distinction that appears to reference burger-flipping robots like “Flippy,” who plied his trade in a California fast food kitchen before being temporary suspended – because he wasn’t working fast enough.

A prototype of Spyce’s robotic chef was first assembled in the basement of the co-founders’ fraternity house at MIT.

The restaurant’s dining experience actually begins a few steps before the robots get involved, when customers create customized, compostable bowls that cost $7.50 using colorful touch-screens. Heavy on vegetables and healthy grains, the bowls include a calorie count and have themes such as Latin, Thai, Mediterranean and Hearth.

While meals are cooked, the customer’s name appears on an electronic display above their wok, showing their order. Once finished, hot water jets rinse the inside of woks before another collection of ingredients is dumped inside. Farid said they decided to place the robotic chefs out in the open to remove any lingering mystery.

“We didn’t want to create a black box that produces a meal,” Farid said. “We wanted this experience to be exciting.”

That motto is one that the restaurant industry is beginning to adopt as a whole, experts say. Restaurants across the country already incorporate automated technology, such as “self-service ordering” and “robotic servers,” according to a report last year by the McKinsey Global Institute.

The report concluded that jobs that involve “predictable physical activities” – such as cooking or serving food, cleaning kitchens, collecting dirty dishes and preparing beverages – are the most susceptible to automation.