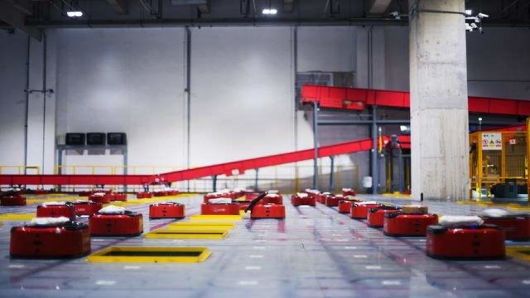 Please Share This Story!
PDF 📄
Technocrats value machines and automation over people. China has enough people to staff any number of factories and warehouses, but Technocrat engineers would rather co-opt them by using robots instead. This guarantees runaway income inequality and ultimately, a return to feudalism. ⁃ TN Editor

At a recent technology show in Tokyo, a large robot arm reached into a full-sized mockup of a shipping container and began unloading boxes from it. Set on a platform that moved back and forth, the robot was doing a job usually carried out by warehouse workers and forklift operators. The goal of the company that’s developing it, Mujin, is total automation.

The system, still a prototype, doesn’t work perfectly — it accidentally damaged a box during the demo — but it’s going to be trialed in warehouses in Japan this year.

“Lifting heavy boxes is probably the most backbreaking task in warehouse logistics,” said Mujin’s American co-founder and CTO, Rosen Diankov. “A lot of companies are looking for truck unloading systems, and I believe we’re the closest to commercialization.”

The Tokyo-based start-up is aiming to be a leader in automating logistics processes. To do that, it’s building robot controllers and camera systems and integrating them with existing industrial robot arms. The key product here is the controllers — each about the size of a briefcase, one for motion planning and one for vision — that act as an operating system that can control the hardware from any robot manufacturer. If a goal such as grasping an object is input, the controllers automatically can generate motions for robots, eliminating the traditional need to “teach” robots manually. The result, according to the company, is higher productivity for users.

Simply put, the technology — based on motion planning and computer vision — makes industrial robots capable of autonomous and intelligent action.

Mujin turned heads when it showed off its transformation of a warehouse operated by Chinese e-commerce giant JD.com. The 40,000-sq-m facility in Shanghai began full operations in June. It was equipped with 20 industrial robots that pick, transfer and pack packages using crates on conveyor belts, as well as camera systems and Mujin robot controllers. Other robots carted merchandise around to loading docks and trucks.

Amazon also has invested heavily in automating its fulfillment centers, buying Mass.-based robot company Kiva Systems for $775 million in 2012, but JD.com called its facility the world’s first fully automated e-commerce warehouse. Instead of the usual 400 to 500 workers needed to run a warehouse that size, it needs only five. And their job is only to service the machines, not run operations.

“My goal is to automate warehouses in America and make a lot of success stories there,” said Diankov. “But will people value that, and are there enough people with expertise to do it? That’s why we started in Japan.”

Mujin’s plan is to move away from customization for every client and standardize a complete automation package.

“Unfortunately, just having a robot system work perfectly is not enough, and we need to have the equipment and system around the robot to finally allow it to contribute to the operations of the business,” said Diankov. “Once there are enough solid standardized components for warehouse automation, we can focus our energies to quickly deploy and perfect them.”