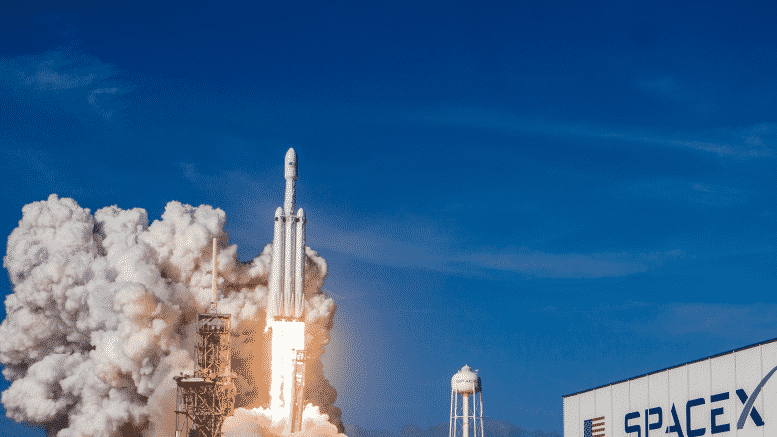 Technocrat Elon Musk intends to bring ultra high-speed gigabit Internet to the USA and beyond with a blanket of low-orbit small satellites. This will result in ‘no person left behind’ because it will reach every rural area that currently does not have Internet. ⁃ TN Editor

SpaceX told the FCC in a Feb. 1 letter that it plans to launch a pair of experimental satellites on one of its Falcon 9 rockets. That launch, already approved by the FCC, is set for Saturday in California.

In 2017, SpaceX had submitted regulatory filings to launch a total of nearly 12,000 satellites to orbit by the mid-2020s. The internet communication satellites are expected to be in the smallsat-class of 100-to-500 kg (220-to-1,100 lb)-mass, which are intended to be orbiting at an altitude of approximately 1,100 kilometers (680 mi). Initial plans as of January 2015 were for the constellation to be made up of approximately 4000 cross-linked satellites, more than twice as many operational satellites as were in orbit in January 2015.

The satellites would be mass-produced, at much lower cost per unit of capability than existing satellites. SpaceX is going to try and do for satellites what we’ve done for rockets. In order to revolutionize space, they have to address both satellites and rockets. Smaller satellites are crucial to lowering the cost of space-based Internet and communications.

The SpaceX system will consist of 4,425 satellites operating in 83 orbital planes (at altitudes ranging from 1,110 km to 1,325 km). This system will also require associated ground control facilities, gateway earth stations, and end-user earth stations. Using Ka- and Ku-Band spectrum, the initial system is designed to provide a wide range of broadband and communications services for residential, commercial, institutional, governmental, and professional users worldwide.

SpaceX plan is to launch 800 satellites initially to expand internet in the U.S. and other parts of Europe and the northern hemisphere. This could begin operating in 2019. Once fully optimized through the Final Deployment, the system will be able to provide high bandwidth (up to 1 Gbps per user), low latency broadband services for consumers and businesses in the U.S. and globally.

Each satellite in the SpaceX System provides aggregate downlink capacity of 17 to 23 Gbps, depending on the gain of the user terminal involved. The 1600 satellites in the Initial Deployment would have a total capacity of about 32 Terabits per second. SpaceX will periodically improve the satellites as later satellites are deployed.

The system will use phased array technology to dynamically focus beams. Frequencies can be reused effectively across the network to enhance the flexibility and capacity and robustness of the overall system.

Spacex will be able to provide broadband service at speeds of up to 1 Gbps per end user.

The low-Earth orbits will allow Spacex to target latencies of approximately 25-35 ms.

With deployment of the first 800 satellites, the system will be able to provide U.S. and international broadband connectivity; when fully deployed, the system will have truly global coverage.

SpaceX has separately filed for authority to operate in the V-Band, where we have proposed an additional constellation of 7,500 satellites even closer to Earth, our Very Low Earth Orbit (VLEO) system.

In February 2015, SpaceX asked the U.S. Federal Communications Commission (FCC) to consider future innovative uses of the Ka-band spectrum before the FCC commits to 5G communications regulations that would create barriers to entry, since SpaceX is a new entrant to the satellite communications market. The SpaceX non-geostationary orbit (NGSO) communications satellite constellation will operate in the high-frequency bands above 24 GHz, “where steerable earth station transmit antennas would have a wider geographic impact and significantly lower satellite altitudes magnify the impact of aggregate interference from terrestrial transmissions

Pai said after a staff review he was urging approval for SpaceX, saying: ”it would be the first approval given to an American-based company to provide broadband services using a new generation of low-Earth orbit satellite technologies.”

Another idiotic scheme of Elon Mush’s. Rural areas are POOR, therefore, total lack of funds for high speed anything, unless Mr. Technocrat-Musk intends to give service away for free. (he won’t) Besides, most rural areas have Century Stink, a dismally shitastic service that has no human beings who can make executive decisions to resolve issues on your behalf. Since this whole idea is idiotic and way too altruistic, then that means THE REAL REASON for this is not being said. Surveillance and MOAR micro-management of people who try to GTFO of modern slave society will be dragnetted back in again.… Read more »