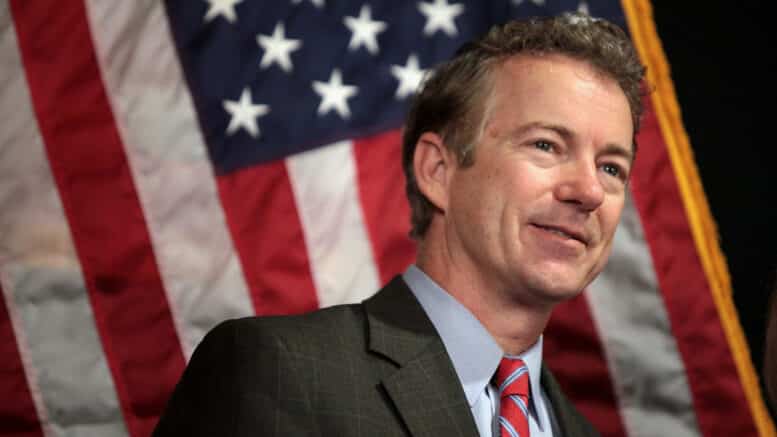 Please Share This Story!
PDF 📄
Sen. Rand Paul (R-KY) is a graduate of the Duke University School of Medicine and is fully qualified to talk about disease management. He says masks, etc., are not about controlling a virus, but rather for forcing people to submit to pseudo-science and its practitioners. ⁃ TN Editor

MARLOW: You have a terrific speech … and you started with something that I wasn’t anticipating, but I absolutely loved, and that’s some actual science about the mask mandates. You broke it down in a very clear way. Talk to us about it.

Every one of the mandates — and you look in country after country, state after state — you look at when the mask mandates went in — the incidents went up exponentially after the mandates. Restaurants, nobody can eat in a restaurant, there’s no science behind any of that.

Middle seat missing on the airplane, you really think you’re like 12 inches from the other guy instead of six inches, it really makes a difference? None of it really makes any sense, and there’s no epidemiological evidence. You know, it’s like, ‘Wash your hands, stand six feet apart.’

There’s no evidence that that slowed down the [spread]. … The trajectory of the virus hasn’t been altered at all by any of these things. I think the vaccine will, and this is why I really despise people like the CNN Doctor [Sanjay] Gupta, who I think is committing television malpractice by saying, ‘Oh, your mask is a much better thing than the vaccine.’ Well, no, it isn’t. The masks aren’t working at all. The thing’s going through the roof and people are dying. Why would you want to discourage someone from taking a vaccine and say, ‘Oh wear the mask.’?

And the masks are different, too. The N95 mask actually does work to a certain extent, if worn properly and used [with] sterile technique. In the hospital, our doctors — I have a brother and sister who are doctors, they wear the N95 mask, and it’s kept them from getting infected — but there’s no value to the cloth mask, at all.

MARLOW: That’s why I call it a face diaper. So you’ve got a public who has accepted this, though, by and large, because we’ve been told by everyone we have to accept it. Have we lost track of the Constitution? Have we forgotten about the Constitution?

Thou shalt not muzzle an ox when he treadeth out the corn. Deuteronomy 25:4. What does this mean? The ox in the old days would be the laborer in which he ground the corn, but they would muzzle the ox so he wouldn’t eat it while he was working. If God cares for the ox, he cares for us. These wicked people who are muzzling you hate you, we need to put a stop to it right now! Read this great article: 2020: The Year The Church Was As Sharp As A Two-Edged Marshmallow | ZeroHedge

What to make of the Pauls? I’ve always liked Ron from afar beyond America but his political heir is promoting the vaccine here. My gut says to be wary of them.

Ron Paul has exposed the fiasco from the start, including the vaccine fiasco and the caste-system they are looking towards creating. I don’t know about Rand, they do not even align that well politically, he is not a radical (in the good sense) like his father, etc., but I simply cannot swallow such blatant vaccine shilling and the implication that this is not a scam in every level.

Rep Paul is right on the masks, but completely wrong on the COVID vaccines. Mass medication is an invitation to mass poisoning. Vaccines are a Trojan horse. It is completely crazy to take them, particularly when getting the disease has a higher recovery rate (99%) than getting the vaccine (94%?, which is not really accurate since they were only tested on healthy people). No vaccine has ever been evaluated for its potential to impair fertility, cause cancer, or damage DNA. In fact, the COVID vaccines promise to re-engineer your DNA, plus some of them will also include nanotechnology, so that… Read more »

President Trump is not getting correct information about ANYTHING. He has been surrounded by Deep State Judases from day one. We have to find a way to get Trump the information he needs – be it about the PLANdemic, the truth about masks and the faulty PCR tests, election fraud, etc. Rand Paul could be the contact that can get Trump this information and make him aware of Technocracy.news and other indy sites that I am certain he has no clue about. If anyone has access to Rand Paul, please ask him to pass along to the President info on… Read more »

Yay more stupids. NO N95 does NOT work, in fact it’s the worst for spreading aerosolized virus both into the environment and your own airways. It also suffocates you the most, thereby hampering your immune response as well as suppressing the rest of your body’s normal functions and feeding cancer cells and providing disease an ideal place to take hold. Claiming the mask protects is false. 60% of us are already immune. People who are healthy with no deficiencies are protected up to 100%, especially when it comes to vitamin D. Our immune system is the best defense, better than… Read more »

There are at least 4 covid cures that I know of. Please do an article on them. There is no need for more deaths, no need for masks, and sorry for the Big Pharma supporters, no need for vaccines. One of the cures has been around that is, has been used and publicize, since February and another since March, in other words since the beginning of covid in North America. There have been countless needless deaths since that time. No hospital in America has been mandated to administer these cures. Why not? No media in the mainstream are covering the… Read more »

Presentation made on the I-MASK+ covid cure protocol before the U.S. Senate Committee for Homeland Security December 8, 2020
https://www.youtube.com/watch?v=Tq8SXOBy-4w&feature=share&fbclid=IwAR0OgCpTYMznpDj8AHpvJqpkMElayFx4MGuntoKWCJXt3So-uPULrkzxa5A