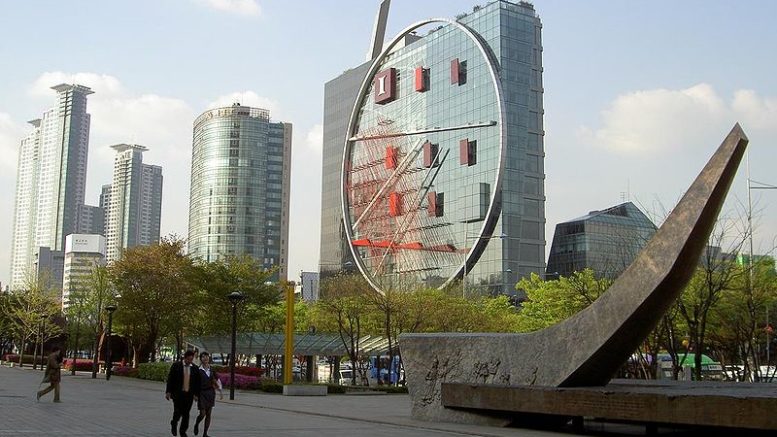 In Technocracy: The Hard Road to World Order, I wrote, “Cryptocurrency is the futuristic tool of Sustainable Development.”  Seoul is proving that crypto is “an essential part of the Smart City toolbox.” ⁃ TN Editor

A local digital currency, separate from the national currency, is an essential part of the smart city toolbox.

Seoul is nearing several significant milestones in its journey towards becoming a blockchain smart city, blockinpress reports. By November, it aims to have the following in place:

According to blockinpress, S-coins will be redeemable for rewards and given to citizens when they use public services and participate in citizenship duties, such as paying taxes and participating in public opinion polls.

Beyond that, the potential applications of a digital currency such as S-coin are almost limitless, as a way of shaping people’s behaviour and streamlining interactions in the smart cities of the future.

To understand the value of the S-coin – the real rather than speculative value – it’s important to understand that one of the guiding principles of Seoul’s smart city program is to put engaged citizens at the centre of everything. After all, a city (and the entire planet for that matter) is for the benefit of its inhabitants first and foremost.

A native cryptocurrency is an excellent way of incentivising desirable behaviour in an organic way.

As people have previously said, government incentives have historically been oriented almost solely around punishments. Citizens behave because they get punished if they don’t. But just about every piece of behavioural research on the planet says a combination stick and carrot approach is by far the best way to instill desirable behaviour in humans and other animals.

Although the exact scope of S-coin, and where it will be rewarded and redeemable, is still up in the air, some of the areas it could be applied include the following:

As a rule, most voters are apathetic. The exceptions to this rule are typically places with a longstanding history of citizen participation, and where participants can get a genuine sense of empowerment.

Only time can create that tradition, but a combination of incentives and some new processes can help create that sense of genuine empowerment on which everything rests. In this case, S-coin is the incentive part of the puzzle. South Korea’s citizen’s suggestion box website is another. Here people can make proposals, and others can vote on them.

Popular proposals go to public discussion forums, where government, private sector and citizens can all weigh in.

It all sounds so wonderful, neat and agreeable on the surface. However, the elitists’ underbelly will eventually show the proposed change as a control mechanism to ‘disallow’ individuals who do not prefer to participate in such smartness. And the crypto-coin thing? Finally, we are seeing the cryptocurrency work-around raising it’s ugly head. Potentially, the blockchain coding could have rid us of banksters, but no. It’s being co-opted by banksters–as usual.

Very true, it’s not clever to put all your eggs in one basket. That’s the crypto philosophy. Crypto is great, but a redundancy of multiple systems of hard currency is better.
I think clever people will realise that as we move away from the fiat currency system, and they’ll jump on the opportunity to provide a market of competing hard currency types.