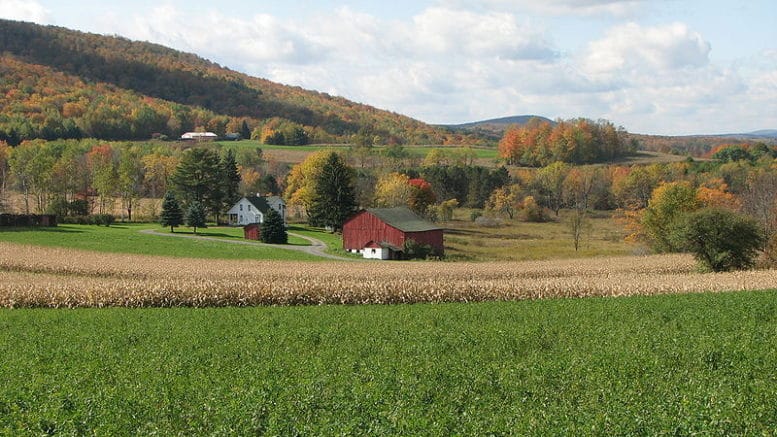 Please Share This Story!
PDF 📄
If global warming isn’t personal enough to scare you to death, the UN trots out the rabid notion that you are going to starve to death as a result of it. Coupled with rising sea levels and shortages of drinking water, mankind has no future unless… it adopts Sustainable Development. ⁃ TN Editor

“The cycle is accelerating,” said NASA climate scientist Cynthia Rosenzweig, a co-author of the report. “The threat of climate change affecting people’s food on their dinner table is increasing.”

But if people change the way they eat, grow food and manage forests, it could help save the planet from a far warmer future, scientists said.

Earth’s land masses, which are only 30% of the globe, are warming twice as fast as the planet as a whole. While heat-trapping gases are causing problems in the atmosphere, the land has been less talked about as part of climate change. A special report, written by more than 100 scientists and unanimously approved by diplomats from nations around the world Thursday at a meeting in Geneva, proposed possible fixes and made more dire warnings.

“The way we use land is both part of the problem and also part of the solution,” said Valerie Masson-Delmotte, a French climate scientist who co-chairs one of the panel’s working groups. “Sustainable land management can help secure a future that is comfortable.”

Scientists at Thursday’s press conference emphasized both the seriousness of the problem and the need to make societal changes soon.

“We don’t want a message of despair,” said science panel official Jim Skea, a professor at Imperial College London. “We want to get across the message that every action makes a difference.”

Still the stark message hit home hard for some of the authors.

“I’ve lost a lot of sleep about what the science is saying. As a person, it’s pretty scary,” Koko Warner, a manager in the U.N. Climate Change secretariat who helped write a report chapter on risk management and decision-making, told The Associated Press after the report was presented at the World Meteorological Organization headquarters in Geneva. “We need to act urgently.”

The report said climate change already has worsened land degradation, caused deserts to grow, permafrost to thaw and made forests more vulnerable to drought, fire, pests and disease. That’s happened even as much of the globe has gotten greener because of extra carbon dioxide in the air. Climate change has also added to the forces that have reduced the number of species on Earth.

And the future could be worse.

“The stability of food supply is projected to decrease as the magnitude and frequency of extreme weather events that disrupt food chains increases,” the report said.

“The potential risk of multi-breadbasket failure is increasing,” NASA’s Rosenzweig said. “Just to give examples, the crop yields were effected in Europe just in the last two weeks.”

But better farming practices — such as no-till agricultural and better targeted fertilizer applications — have the potential to fight global warming too, reducing carbon pollution up to 18% of current emissions levels by 2050, the report said.

If people change their diets, reducing red meat and increasing plant-based foods, such as fruits, vegetables and seeds, the world can save as much as another 15% of current emissions by mid-century. It would also make people more healthy, Rosenzweig said.

The science panel said they aren’t telling people what to eat because that’s a personal choice.

I can grow enough food in my backyard to feed a neighborhood AND have done so. Climate change is not keeping us from doing just that. This is about industrial agriculture interests who foresee potential profits dropping due to changing that must be made in their practices–that cost them. Ridiculous propaganda.

The climate has been changing since the Earth has existed. So, how is it that there is any cultivable land left, according to this ridiculous garbage they call climate science?

Dear SETH BORENSTEIN, Earth’s hydrology is deliberately being destroyed by filling the air with individually invisible nano sized particulates of barium, strontium, aluminum and polymers from plane sprayin and from Gate’s ocean based Cloud Brighteners and from ground artificial cloud like aerosol generators. So much is in our air it acts like humidity but it electromagnetizes the air. We are breathing it in. Trees are slowly dying uptaking it from fallout into the soil. It makes them more combustible. Look at the sky every day and night. My website is pimpmyweather.blogspot.com loretta.marmor@yandex.com 562-618-2752 Thank you for being a real journalist.… Read more »