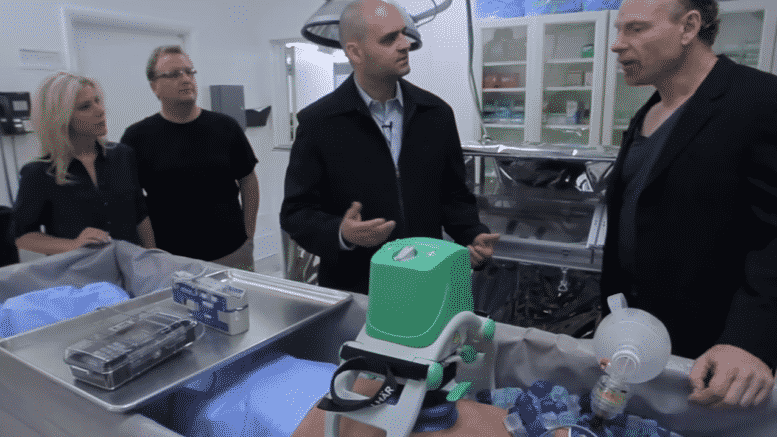 Please Share This Story!
PDF 📄
Max More and his wife Natasha are “founding fathers” of the modern global Transhuman movement. Max also runs the Alcor Life Extension Foundation where you can have your head put in a deep-freeze for an indefinite period until science advances enough to bring you back to permanent life, or immortality. ⁃ TN Editor

When an 87-year-old Californian man was wheeled into an operating room just outside Phoenix last year, the pandemic was at its height and medical protocols were being upended across the country.

A case like his would normally have required 14 or more bags of fluids to be pumped into him, but now that posed a problem.

Had he been infected with the coronavirus, tiny aerosol droplets could have escaped and infected staff, so the operating team had adopted new procedures that reduced the effectiveness of the treatment but used fewer liquids.

It was an elaborate workaround, especially considering the patient had been declared legally dead more than a day earlier.

He had arrived in the operating room of Alcor Life Extension Foundation — located in an industrial park near the airport in Scottsdale, Ariz. — packed in dry ice and ready to be “cryopreserved,” or stored at deep-freeze temperatures, in the hope that one day, perhaps decades or centuries from now, he could be brought back to life.

As it turns out, the pandemic that has affected billions of lives around the world has also had an impact on the nonliving.

From Moscow to Phoenix and from China to rural Australia, the major players in the business of preserving bodies at extremely low temperatures say the pandemic has brought new stresses to an industry that has long faced skepticism or outright hostility from medical and legal establishments that have dismissed it as quack science or fraud.

In some cases, Covid-19 precautions have limited the parts of the body that can be pumped full of protective chemicals to curb the damage caused by freezing.

Alcor, which has been in business since 1972, adopted new rules in its operating room last year that restricted the application of its medical-grade antifreeze solution to only the patient’s brain, leaving everything below the neck unprotected.

In the case of the Californian man, things were even worse because he had died without completing the normal legal and financial arrangements with Alcor, so no standby team had been on hand for his death. By the time he arrived at Alcor’s facility, too much time had elapsed for the team to be able to successfully circulate the protective chemicals, even to the brain.

That meant that when the patient was eventually sealed into a sleeping bag and stored in a large thermos-like aluminum vat filled with liquid nitrogen that cooled it to minus 320 degrees Fahrenheit (minus 196 Celsius), ice crystals formed between the cells of his body, poking countless holes in cell membranes.

Max More, the 57-year-old former president of Alcor, said that the damage caused by this patient’s “straight freeze” could probably still be repaired by future scientists, especially if there was only limited damage to the brain, which is often removed and stored alone in what is known in the trade as a “neuro” preservation.

“I have always been signed up for a neuro myself,” Mr. More said. “I don’t really understand why people want to take their broken-down old body with them. In the future it’ll probably be easier to start from scratch and just regenerate the body anyway.”

“The important stuff is up here as far as I am concerned,” he said, pointing to his sandy-blond crop of hair in a Zoom call. “That is where my personality lives and my memories are … all the rest is replaceable.”

A bunch of dumbass reincarnates who haven’t a CLUE about WHO they really are. They think they ARE the body and that their own conscious psyche is a artifact of the body. For them, it’s always about physical immortality, material reductionism and body ID (identity, race, gender). There’s zero awareness of WHO they really are (an incarnational connection from their own, unique Higher Self on another level, using a body to gather experiences) because these sequentials have a low ‘spirit ceiling’ of understanding in the stage of incarnational progression they’re in.

I could be in more agreement with your ‘spirit ceiling’ comment. I thank Source that some of us understand this very simple concept. When faced with ridiculous materialism worship one just has to say, ‘Well, bless their hearts’. (That’s Southern speak for ‘you’re idiots’.)

the only thing i know that gets frozen after being made, and then comes back to life after being thawed, is bread.
Then i toast it, and eat it.

I think the transhumanists are the materialist magicians C.S. Lewis talked about.

Yes, build on top of Scientism

These people are idiots. Fearful idiots. Immortality in this body? In the words of Mel Brooks, “Man, you are NVTS, nuts!” (History of the World, Part I)

Rick in Phoenix
Reply to  Elle

Actually, the theory behind it was expressed nicely by Eric Drexler in 1985 in his book “Engines of Creation”, a treatise that outlined the idea of, and engineering possible with… “nanotechnology”… or control of matter on the scale of 10 to the minus 9 meters…. or nanometers. Drexler wrote of cryonics… “Memory and personality are encoded in preservable brain structure”. Admittedly, nanotechnology may have constraints that preclude recovery and rebuilding of a brain but the principle behind it has merit. After all, the frozen food industry has been very successful, for example. The principle behind frozen Marie Callendar meals is… Read more »