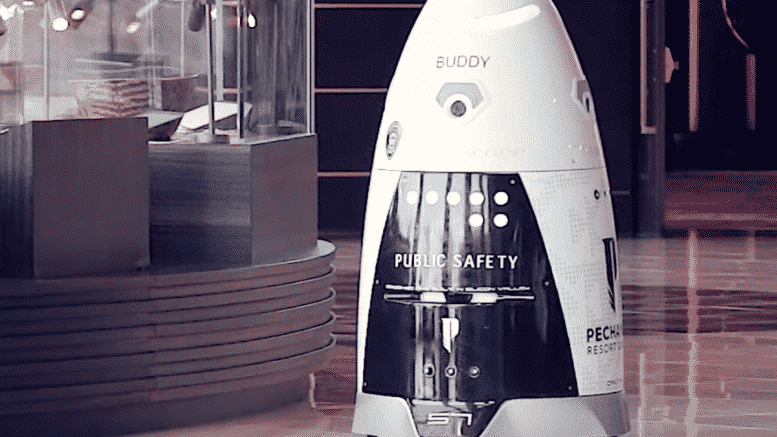 Please Share This Story!
PDF 📄
The CEO of security robot manufacturer, Knightscope, says that America could be the safest nation on earth if only there were enough security robots deployed. Conversely, actual users of these robots have little to report in tangible results. However, each robot can collect over one terabyte of data per day! ⁃ TN Editor

When the Westland Real Estate Group bought Liberty Village, a sprawling 1,000-unit apartment complex on the northeastern edge of Las Vegas nearly two years ago, the police department identified it as one of the city’s most frequent sources of 911 calls.

“There was a little bit of everything,” said Dena Lerner, a spokeswoman for Westland. “A lot of gang activity that revolved around controlled substances, prostitution, dog rings. We had issues with gun rings, drive-by shootings, robberies, assaults — we’re talking everything.”

So earlier this year, Westland introduced a broader program to reduce crime and added an “autonomous security robot” manufactured by Knightscope, a Silicon Valley company to make the complex safer. Each robot is given a nickname, and the one roaming around Liberty Village is called “Westy.”

This model, K5, is a conical, bulky, artificial intelligence-powered robot that stands just over 5 feet tall. Westy slowly roams around at about a human walking speed, with four internal cameras capturing a constant 360-degree view. It also can scan and record license plates and unique digital identifiers that every cellphone broadcasts, known as MAC addresses.

But it’s unclear how much Westy has reduced crime at Liberty Village. Knightscope, which is eagerly trying to recruit new clients, told local news outlets that Westy had resulted in a “significant drop in 911 calls,” underscoring “yet another crime-fighting win.” Knightscope included articles about Westy as part of its recent pitch to individual investors and in its plans to take the company public.

Officer Aden Ocampo-Gomez, a spokesman for the Las Vegas Metropolitan Police Department, said that while the complex is no longer in the agency’s top 10 list for most frequent 911 calls in the northeastern part of the Las Vegas Valley, he doesn’t think all the credit should go to Westy.

“I cannot say it was due to the robot,” he said.

As more government agencies and private sector companies resort to robots to help fight crime, the verdict is out about how effective they are in actually reducing it. Knightscope, which experts say is the dominant player in this market, has cited little public evidence that its robots have reduced crime as the company deploys them everywhere from a Georgia shopping mall to an Arizona development to a Nevada casino. Knightscope’s clients also don’t know how much these security robots help.

“Are we seeing dramatic changes since we deployed the robot in January?” Lerner, the Westland spokesperson said. “No. But I do believe it is a great tool to keep a community as large as this, to keep it safer, to keep it controlled.”

For its part, Knightscope maintains on its website that the robots “predict and prevent crime,” without much evidence that they do so. Experts say this is a bold claim.

“It would be difficult to introduce a single thing and it causes crime to go down,” said Ryan Calo, a law professor at the University of Washington, comparing the Knightscope robots to a “roving scarecrow.”

Additionally, the company does not provide specific, detailed examples of crimes that have been thwarted due to the robots.

“I definitely say that we are making a difference,” said Stacy Stephens, Knightscope’s co-founder and executive vice president. “You don’t know what might have happened compared to deploying a security guard out there.”+

Use Of Security Robots Spreads But Few Tangible Results Seen