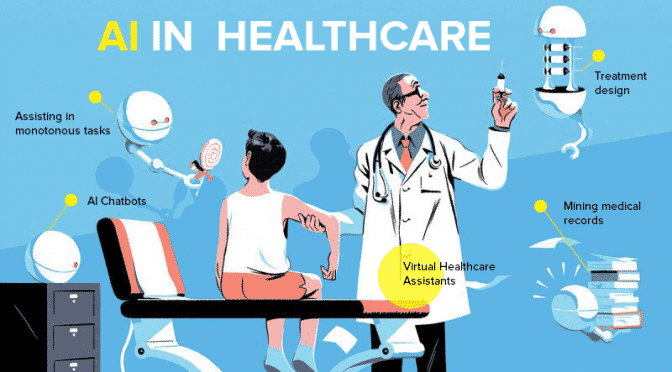 Please Share This Story!
PDF 📄
AI is invading all areas of the health care industry: exam room, diagnosis, prognosis, treatment options and exclusions, HMO management, health insurance allowances, etc. The next time you go to a doctor’s office, note how much data they are collecting on you! ⁃ TN Editor

The patient suffers from abdominal pain, along with symptoms in atypical locations, which makes diagnosis tricky. An astute examination reveals the cause: an unusual form of appendicitis. However, credit doesn’t to go to the radiologist. Instead, an imagery machine built with artificial intelligence technology, which can draw on knowledge of tens of millions of similar scans, recognizes the anomaly and makes the diagnosis.

That scenario is no longer the stuff of science fiction. Pressed to reduce costs and boost productivity, medical equipment manufacturers and technology companies are increasingly investing in AI. Several such systems already exist, and growth could ramp up over the next few years, particularly in the field of diagnostic imagery.

“Based on our analysis of AI capabilities, as well as discussions with executives and industry experts, we’re seeing a number of applications across the entire healthcare spectrum, from prevention to diagnosis to follow up,” says Michael Jungling, head of Morgan Stanley Research’s Medical Tech and Services team.

In a recent report, Jungling and his colleagues found that, while hurdles to the development and deployment of MedTech AI lay ahead—including questions around regulations and privacy of patient data—the successful implementation of AI in the field could boost productivity, lower treatment costs and drive growth across the healthcare value chain.

Morgan Stanley estimates that the global market for AI in healthcare could surge from $1.3 billion today to $10 billion by 2024, growing at an annual compound rate of 40%. For investors, large MedTech companies and equipment providers, as well as AI tech providers and emerging startup disruptors could all present opportunities.

AI aims to mimic human cognitive processes, such as learning and reasoning via algorithms and large sets of data. The most popular method is machine learning, in which a model is trained on a data set—such as the intestinal scans of millions of patients—to independently analyze and categorize new datasets. The more complex and larger the volume of data, the more enhanced the cognitive reasoning ability of the model.

Medical AI has great potential, from managing dialysis to optimizing patient-dosing to early disease detection. However, much depends on the power and design of the AI itself.  “The timelines for adoption of AI-enabled MedTech will likely be determined by the tangible economic benefits produced by the product and the ease of usability and integration into existing workflows,” Jungling says.

We’re still in the early stages. With relatively modest deployments of AI, such as assistive intelligence, which helps reduce manual processes and simple, but repetitive tasks, such as appointment scheduling, leaving skilled medical staff with more time for specialized and revenue-generating work.

More advanced forms of AI could help medical professionals with their decision-making, by evaluating diagnostic images and creating treatment plans. This form of AI, known as unsupervised machine learning, can assess raw unstructured data and search for patterns. “Such functionality could lead to dramatic improvements in productivity, especially in clinical settings where the supply of highly skilled professionals is limited,” says Jungling.

AI could eventually perform tasks like diagnostics without user input, but such scenarios remain far down the road.