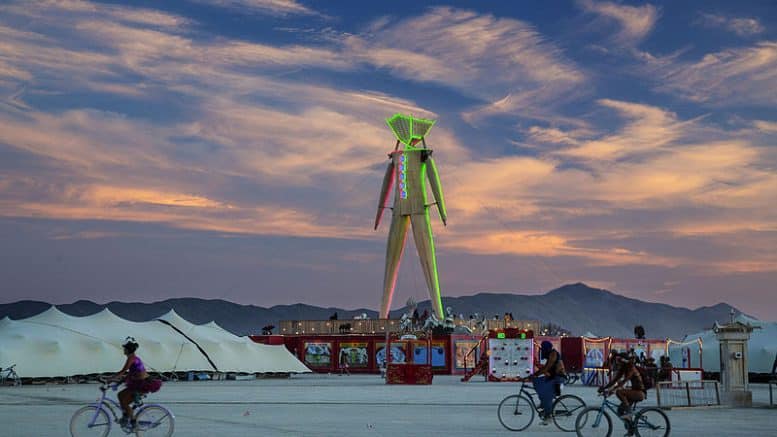 The annual Burning Man festival in Black Rock, Nevada is Big Tech’s pinnacle of paganism, eastern mysticism and social engineering. The original title of this article indicates their desire to continue the Burning Man experience throughout the year. ⁃ TN Editor

To Chad Mureta, a Silicon Valley app guru, the intimate salons of Jess Magic, a New Age troubadour, are “like drugs, without taking anything.”

To Sanjiv Sidhu, a so-called software savant whose fortune was once estimated at over $6 billion, Magic’s invitation-only salons are the perfect escape from a business culture where one-upmanship is “crowding out our need to connect.”

To Jason Silva, the tech futurist and TV personality, her gatherings are a safe space for entrepreneurs who “sacrifice friendships, relationships and time,” only to “realize that it’s lonely at the top.”

Tech elites who are looking for more than extra zeros in their bank statements are finding it in an unlikely place: so-called songversations, emotion-heavy gatherings that combine philosophical rap sessions with improvised music, run by a ukulele-strumming songstress who describes herself as a “heartist.”

Branded as “Soul Salons,” they import the cosmic-explorer sensibility of Burning Man’s dusty playa into the cozy living rooms of prominent entrepreneurs, where they sing freestyle on topics as diverse as environmental degradation and heartbreak. Think of it as a free-jazz equivalent of an Esalen retreat.

The tech A-list is a curious place to land for Magic, 37, who speaks in the soothing tones of a massage therapist and divides her time between Cardiff, California, and Bali, Indonesia. Until a few years ago, Magic ran a nonprofit for survivors of sexual trauma.

Despite her wood-nymph aura, or maybe because of it, Magic has found herself in some button-down circles. In 2016, she performed at the Women Economic Forum in New Delhi and at a star-studded birthday party of her friend Ken Howery, a founder of PayPal, on Necker Island.

“I don’t know if you’d call this a breakthrough,” she said, “but I got Peter Thiel to sing along and Elon Musk to smile.”

Magic, who seems to approach every topic with a sense of giddy wonder, as if she just fell in love five minutes ago, believes that her appeal is rooted in the spiritual hollowness so many business elites feel, despite their wealth.

“The finance and tech scene is still riding the waves of hypermasculine values,” she said. “Coffee to get through the day, alcohol to wind down, then sleeping pills at night to turn off the mind from all that they have going on.”

“People forget that they are human beings rather than human doings,” she added.

Enter the Soul Salon, which Magic calls “a play date for your inner child” and performs as a “gift,” she said (although guests are invited to “contribute in accordance with the value they feel they received”).

The salons usually start with a theme — say, the emptiness of consumer culture. As key phrases arise, Magic will begin strumming and humming, weaving those lines of dialogue into a lilting melody. The effect is vaguely akin to Joni Mitchell performing freestyle rap at Davos.

As the extemporaneous song grows, others join in with musings of their own, call-and-response style. Not every captain of industry can carry a tune, of course, but that’s not the point. As Magic likes to say, “We don’t sing to be good, we sing to be free.”

Andrew Hewitt, creator of GameChangers 500, which ranks the world’s top “for-benefit” businesses, said he has “witnessed some of the headiest Silicon Valley titans be deeply touched through these experiences.”

“For people who live most of the time in their head,” Hewitt said, “this feels like magic.”