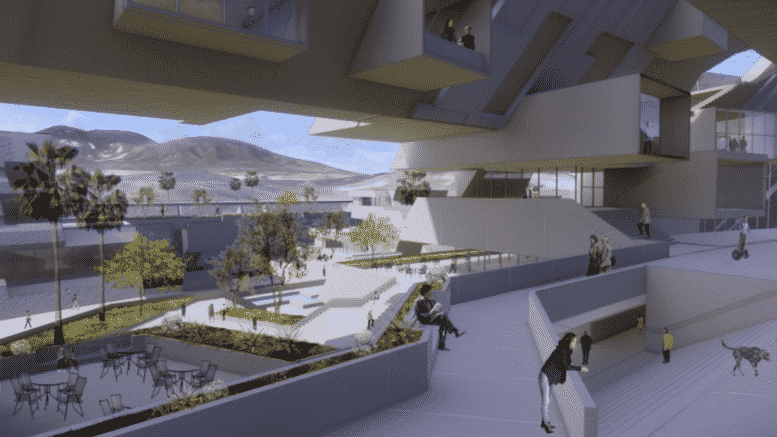 Please Share This Story!
PDF 📄
This is essentially a high-tech autonomous zone where federal, state and local law and sovereignty will be negated in favor of technocrat rule by blockchain, where everything in your life is recorded. If one such zone gets “approved”, then how many more will quickly follow? ⁃ TN Editor

In the Nevada desert, a cryptocurrency magnate hopes to turn dreams of a futuristic “smart city” into reality. To do that, he’s asking the state to let companies like his form local governments on land they own, which would grant them power over everything from schools to law enforcement.

Jeffrey Berns, CEO of Nevada-based Blockchains LLC, envisions a city where people not only purchase goods and services with digital currency but also log their entire online footprint — financial statements, medical records and personal data — on blockchain. Blockchain is a digital ledger known mostly for recording cryptocurrency transactions but also has been adopted by some local governments for everything from documenting marriage licenses to facilitating elections.

The company wants to break ground by 2022 in rural Storey County, 12 miles (19 kilometers) east of Reno. It’s proposing to build 15,000 homes and 33 million square feet (3 million square meters) of commercial and industrial space within 75 years. Berns, whose idea is the basis for draft legislation that some lawmakers saw behind closed doors last week, said traditional government doesn’t offer enough flexibility to create a community where people can invent new uses for this technology.

“There’s got to be a place somewhere on this planet where people are willing to just start from scratch and say, ‘We’re not going to do things this way just because it’s the way we’ve done it,’” Berns said.

He wants Nevada to change its laws to allow “innovation zones,” where companies would have powers like those of a county government, including creating court systems, imposing taxes and building infrastructure while making land and water management decisions.

The prospect has been met with intrigue and skepticism from Nevada lawmakers, though the legislation has yet to be formally filed or discussed in public hearings. Most in the Democratic-controlled Legislature are eager to diversify Nevada’s tourism-dependent economy, but many fear backlash against business incentives as they struggle to fund health care and education.

This proposal differs from the big tax rebates they have grown wary of offering, like the $1.3 billion given to Tesla to build its northern Nevada battery factory or the billions New York and Virginia offered Amazon to build new corporate headquarters.

But it raises deeper issues about increasing tech companies’ grip on everyday life at a time when antitrust regulators and Democrats in Congress allege tech giants like Facebook and Google are controlling markets and endangering people’s privacy.

Blockchains LLC and so-called innovation zones were a key part of Gov. Steve Sisolak’s January State of the State address, when he outlined plans to rebuild a more diversified economy after the coronavirus pandemic.

Sisolak, whose campaign and affiliated political action committee received a combined $60,000 from the company, said the proposal would transform Nevada into “the epicenter of this emerging industry and create the high-paying jobs and revenue that go with it.”

The governor’s office declined to comment further on innovation zones. But with Sisolak’s backing, the idea could garner serious consideration in the Legislature.

“I don’t know enough yet to say whether I’m comfortable with this as the next step or not. But, look, it’s a big idea and Nevada has been built on big ideas, so let’s hear it out,” said state Sen. Ben Kieckhefer, a Republican who sponsored blockchain-related legislation in 2017 and 2019.

If lawmakers back the proposal, technology companies with 50,000 acres of land (200 square kilometers) that promise a $1 billion investment could create zones governed by three people like county commissioners. The draft legislation says two of them initially would be from the company itself.

In Storey County, which is home to Tesla’s factory, officials are waiting for more information before offering opinions but say questions still need to be answered.

Commissioner Lance Gilman, who owns the Mustang Ranch brothel and bought most of the county’s land to turn it into an industrial park decades ago, has supported luring technology companies to the area and growing its population. But Gilman, who worked in marketing for Blockchains LLC from 2018 to 2019, said there are many unknowns about ceding control to a new jurisdiction that falls within county borders.

”(The bill) wants the host county to let it form, become successful, not pay them very much money, and eventually let them take over the whole county and all the operations, if it becomes successful,” Gilman said. “If it doesn’t become successful, who becomes responsible for all the stuff that was built in the meantime?”

In the end, this whole house of cards is built upon the illegal theft of Indigenous Native American Lands.
This is Babylon and a Babylon system foisted upon the world…. It ends with the enslavement of humanity and destruction of planet earth. God help us because the writing is on the wall.

If you want to see where this goes, Hollywood has already shown us in the 1975 film “Rollerball”. There are three countries left in the world, and all economic activity has been divided into a handful of single-corporation monopolies. Every aspect of everyone’s life is controlled from birth to death by a corporation they are owned by.

Governor Kristi Noems of South Dakota spoke at CPAC 2021. She stated that South Dakota was the only state that did not implement any COVID 19 restrictions. There were no governor mask mandates, or stay-home orders declared. Schools stayed open & businesses operated normally. Emergency management was not declared a government function. Rights weren’t violated. Covid didn’t run rampant & hospitals were not overrun. Noems simply gave the public the info they needed to make decisions for their own families. As a result, South Dakota has the lowest unemployment in the country. And the people remain in good health.