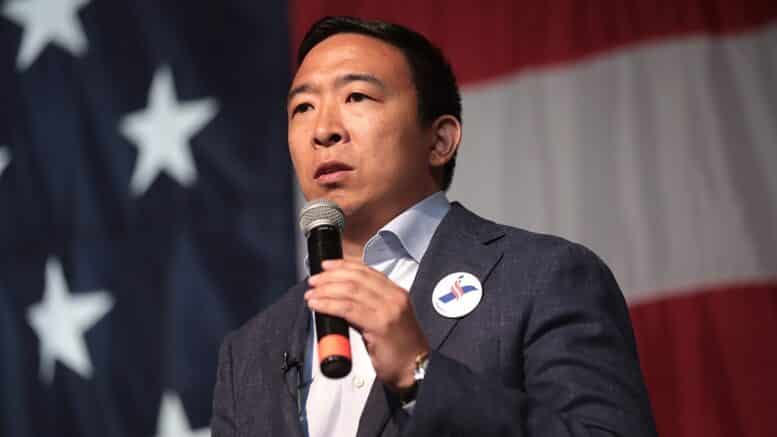 Please Share This Story!
PDF 📄
Technocrats view humanity as just another herd of animals, like cattle. Herds need to be corralled, managed and coded for careful monitoring and individual care. They are fed tailored diets and medicated. It’s an easy life for the cattle, until you realize that they all end up in the slaughter house in the end.

It’s odd that Yang is taking heat for his “idea” while a vaccine passport has openly been in the making for well over a year. ⁃ TN Editor

Former Democratic presidential candidate Andrew Yang is calling for a system people can use to provide proof that they have been vaccinated for COVID-19, suggesting something “like a bar code they can download to their phone” would make it easier to safely congregate.

Yang, whose campaign for the White House was based on a platform calling for universal basic income, tweeted Friday, “Is there a way for someone to easily show that they have been vaccinated – like a bar code they can download to their phone? There ought to be.”

He argued, “Tough to have mass gatherings like concerts or ballgames without either mass adoption of the vaccine or a means of signaling.”

The businessman went on to say, “I’ve been tested at a photo shoot or interview and gotten a bracelet showing I was negative. Then we could interact more freely.”

Yang was blasted for the suggestion on Twitter, with many likening his idea to the way Jewish people were labeled in Nazi Germany.

Conservative podcaster Stephen Miller replied, “Might want to rethink this one before running for mayor of the city with the largest concentration of Jewish population in the country,” referring to reports that Yang may run for mayor of New York City.

“This is Nazi talk Andrew,” wrote director Robby Starbuck, while someone else added sarcastically, “How about yellow star attached to our shirts?”

Not everyone found that analogy fair. One person wrote, “As a Jew I find it pretty insulting that people are comparing a QR code that shows whether you can transmit a deadly disease to the Nazis marking my ancestors for slaughter, but whatever. That’s politics I guess.”

Some folks also referenced the mark of the beast from the Book of Revelation, with one tweeting, “Got to be some sort of….. mark.” Turning Point USA contributor Graham Allen drew a correlation to communist China, writing, “Let me guess social credit comes next?”

Others agreed with Yang, with one person noting that everyone who is inoculated for COVID-19 will receive a vaccination card from the CDC, and suggested people “take a pic of it to show getting into events.”

Someone else stated that they had been working on a “digital health passport” for nearly a year, and another follower wrote, “What! You mean they are not giving people a card? The UK has a card. I assumed we would do likewise.”

Sheeple cannot believe that their “shepherds” (Rulers) are raising them for slaughter.

Like in Nazi Germany? Like the NAZIS did?? Time to ship Yang’s a$$ back to Commie CHI-NA!

Like the scratch ‘mark’ for smallpox given to every child in the 60’s as proof of vaccination. Just search for the reason why smallpox vax was given in mostly the right arm of child and why it as given that way.

Would help if the vaccine even worked. Wouldn’t it?