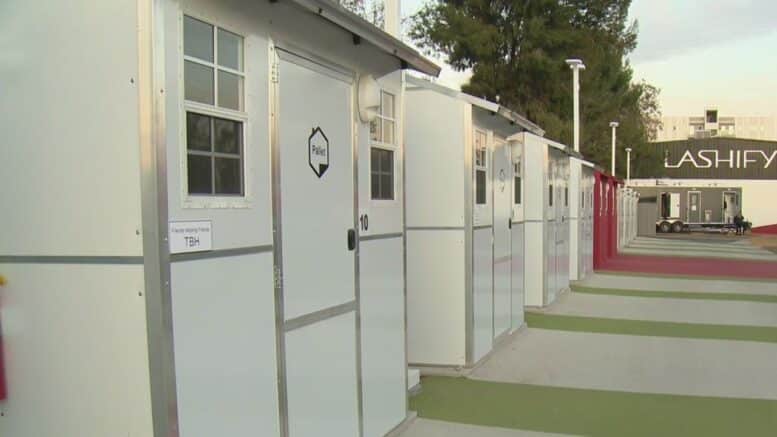 Please Share This Story!
PDF 📄
Compare the picture above and below. Both were built by governments trying to contain the poor and destitute. I know about Soweto because I was there and saw first-hand how kept people sunk into poverty and despair. ⁃ TN Editor

In February, Amy Skinner got the keys to one of the 39 units on the one-acre plot located in a North Hollywood neighborhood and moved into the temporary space with her partner, John Golka, and their dog.

“Being able to lock the door and have a place to sleep is huge,” Skinner commented. 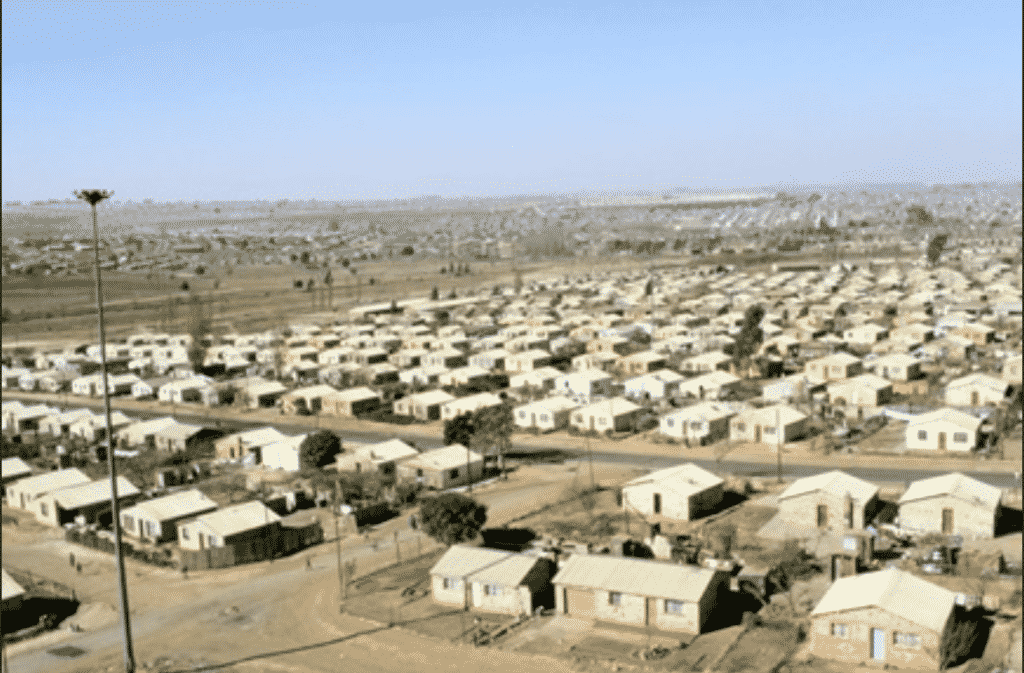 The Chandler Street village was created and funded by Los Angeles in response to the homelessness crisis.

“A 2020 tally found there were 66,400 homeless people in Los Angeles County — up more than 12% from the previous year,” the AP report continued:

More than 150,000 people are homeless statewide. Gov. Gavin Newsom said Tuesday during his State of the State address that he plans to commit $2 billion this year to create more housing for those without shelter, while simultaneously addressing mental health and substance abuse issues.

Ken Craft, CEO of the nonprofit Hope of the Valley, which is in charge of the Chandler Street location, said he asked neighbors if they would prefer a tent encampment or tiny homes on the plot.

“Here we have services,” he explained, adding, “Here people can start to chart a path out of homelessness.”

The units cost about $7,500 each and were shipped from builder Pallet Shelter in Washington. The project’s total cost was around $5 million, according to City Councilman Paul Krekorian’s office.

The Chandler Street residents’ goal is to stay a few months, then move on to more permanent housing.

In December, officials in Redondo Beach, California, began using tiny homes to help solve the area’s homelessness problem. Although its homeless population is estimated to be less than 200, officials experimented with ways to meet the need.

Hope of the Valley is a faith based organization trying to address urban homelessness . Additional support (eg mental, emotional, health, employment assistance) is provided to the once homeless individuals/couples including their dogs. This seems to be a more restorative model than the Soweto “slums” you allude to. Please clarify your skepticism. Thanks.

Kathleen – Understood and on a personal level, I am sure any homeless might appreciate some private space and security. The risk is that the city is creating a long-term slum from which people will find it virtually impossible to escape from. That’s what happened in Soweto, a very hard place to live and survive.

Kathleen, I too, lived in poverty for a long time. And while at university, one year I worked FULL time (yes EIGHT hours) at night and went to school full time (actually, an overload) in the day. While at grad school at Univ. of British Columbia, I lived in an unheated basement, with a window that didn’t close fully. One morning I woke up with a snow drift (yes it DOES snow in Vancouver sometimes; I have been there when it was almost down to 0 F once) over my sleeping bag. We must help others out, and help with… Read more »

The work, Katherine, from the compassion of Christ and His followers, is VERY welcome. The issue, of course – and to which the article, I believe is focussed on – is what **underlies** all of this. Yes, it is compassionate to put a band-aid on injured people, and it often times helps them heal. However, putting band aid on a cancer lesion – which is what the fasco-Marxist state is (yes, CA. has merged fascism, which Mussolini defined in his 1932 eponomous work as the merger of the socialist state with crony big biz – can you say Google, Amazon… Read more »

Edutopia Illusion.
LA mayor Garcetti is corralling Homeless into Skid Row.
The city is going thru Gentrification, not a good thing for the have nots.
Reality Check:
https://youtu.be/VA9XGHnM9VI

“Socialism (lit “gouvernement” au francais) is the great fiction, whereby everybody endeavours to live off of everybody else.”
Frederic Bastiat, 1801-1850

One other suggestion: Can’t the Learjet leftists open up their homes? Such as Limousine liberal Tom Hanks who purchased a 14,500-square-foot mega mansion in Pacific  Palisades for $26 million. It was the largest transaction for a single-family home in Los Angeles County in  2010.” How about Babs Streisand’s $20 mm home? https://www.youtube.com/watch?v=m3wtpKQnTvA How Marxist BLM founder Patrice Cullors $1.6 or so mansion in all white Topanga Canyon, or the $6 mm mansion BLM either owns or uses https://nypost.com/2022/05/09/blms-patrisse-cullors-admits-using-6m-mansion-for-parties/ https://www.foxla.com/news/blm-patrisse-cullors-california-mansion-parties How about the Obamas’ digs on all white Martha’s Vineyard, at 79 Turkeyland Dr. Edgartown, MA – see https://www.forbes.com/sites/kathleenhowley/2019/09/01/obamas-buying-marthas-vineyard-estate-from-boston-celtics-owner/#5abccadd5300… which mansion,… Read more »