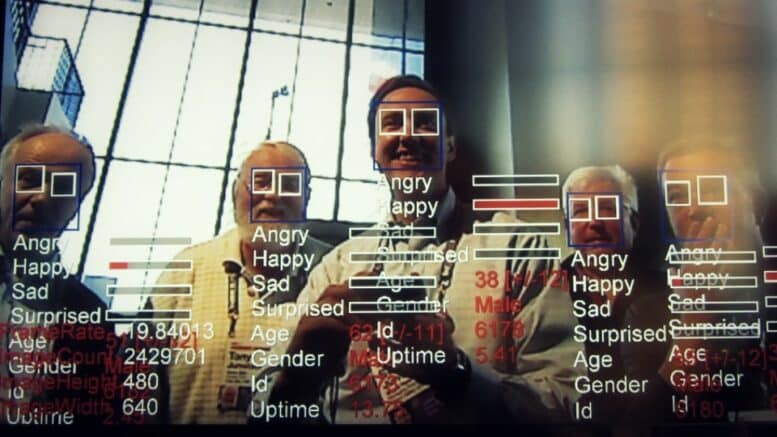 Please Share This Story!
PDF 📄
The next step in ubiquitous monitoring and data collection is your emotional state: are you angry, happy, depressed, content? Technocrats in China will meld this into the Social Credit Scoring system.

China is exporting its Social Credit Scoring technology to any country that will accept it. ⁃ TN Editor

BIG Brother-like mass state surveillance is being developed by China with streets full of cameras that can monitor citizens’ emotions and track their “social credit” scores.

The high tech systems will also help people snoop and rat on each other from the comfort of their homes — or on the go with their smartphones.

The Communist regime’s nightmare-inducing plans involve installing spy cameras in all places and using artificial intelligence to calculate a person’s “social score” which will determine benefits or punishments.

The sheer level of surveillance being planned is straight out of the dystopia created by author George Orwell in his book 1984, where the eyes of the state – Big Brother – are always watching you.

But now it is being made easy with 21st-century spy technology.

It comes as privacy campaigners told The Sun Online that China’s success in developing technology not only threatens the human rights of Chinese citizens but people across the world.

“Domestically, the most frightening part is that many people inside China remain unaware of the true scope of surveillance, and still welcome it as a source of ‘security’.

“In programs such as Sharp Eyes, local governments nationwide have even successfully convinced citizens to take part in surveilling each other. ”

She said: “This would only deepen China’s normative advantages by allowing Chinese surveillance companies strategic expansion on a global scale.”

Vidushi Marda, from human rights and privacy charity organisation ARTICLE 19, said it is feared this highly invasive technology could now spread around the world.

She told The Sun Online: “We think it is crucial to focus on China — not because it is a wildly different style of surveillance — but because Chinese tech companies have fuelled an international boom in governments’ acquisition of surveillance technology.”

We can now reveal some of the terrifying measures being developed by Beijing to keep tabs on its citizens in a very real version of Big Brother.

China has been developing a “social score” system that has also created a dystopian nightmare where citizens can track each other on radar-style “lowlife” scanners.

The nightmarish scheme blacklists “lazy” citizens who get into debt or spend their time playing video games in a creepy initiative that could have come straight out of Black Mirror.

The scheme was first unveiled in 2014 and has been trialed in cities and provinces each using their own system – tracking financial and social worth.

Millions of people with low “social credit” have been banned from taking flights and planes because of the system.

And then people with high credit get discounts, get shorter waiting times at government-run institutes and are more likely to get jobs.

In China’s next five-year plan, which covers 2021 to 2025, the regime has set out its ambitions to step up people watching even more.

It states: “We will also closely guard against, and a crackdown on, the infiltration, sabotage, subversion and separatist activities of hostile forces.”

Biometric surveillance is another sinister development being spearhead by the no-holds-barred Chinese state.

The northwestern region of Xinjiang, the home of the persecuted Uyghurs people, has often been described as the “testbed” for this.

But now the tech is used in all places of transport, such as bus, train or subways.

Among the tests in Xinjiang includes scanning cameras which “read” people’s emotions – identifying whether they might be a threat to the state.

It has also developed cameras which can detect who people are with a 99 per cent success rate based purely on the way they walk.

“Across the country, the government has rolled out projects such as ‘Skynet’ and ‘Sharp Eyes’ to keep the population under constant observation and control.

“People’s movements, interactions, even their expression – can be weaponised against them in China’s system of total surveillance.

“Nowhere is this more terrifying that in China’s Xinjiang Region, where it is estimated up to one million Uighurs have been arbitrarily held captive in so-called ‘re-education camps’ and are subjected to brainwashing and torture.

“The pervasive use of biometric surveillance acts means law enforcement can exact total control over the lives of the Uighur population by watching their every move.

“Facial and emotional recognition is by design a technology of mass surveillance and antithetical to human rights, which is why Amnesty International is calling to Ban The Scan.”

How can a machine read people’s emotions when they are wearing a mask?

By your electromagnetic waves.

Don’t kid yourselves. This was taught to the Chinese by GOOGLE.
Same thing will and is happening in the west as we speak.
What do you think stay 6 feet apart is all about?

re below believe the china training by GOOGLE was called OPERATION DRAGONFLY?

[…] raw model is communist China and its ‘social credit’ system, its concentration camps, its manipulations, its […]

DEALING WITH 5G – R FOR RESISTANCE