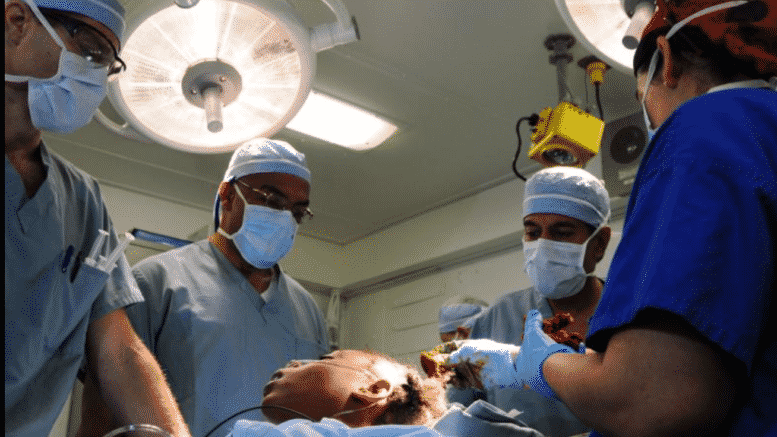 Please Share This Story!
PDF 📄
Insanity within the medical community has reach a new level when a three-year old toddler is virtually sentenced to death because his parents have not been injected with the mRNA jab. The Technocrat mind has no capacity for basic human compassion or regard for life. ⁃ TN Editor

A Cypriot toddler has been refused necessary heart surgery in three separate countries over the fact his parents were not vaccinated.

A three-year-old Cypriot toddler with a serious heart disease was refused necessary surgery in three separate countries because his parents are not vaccinated against the Chinese Coronavirus.

The child is now finally awaiting surgery in Greece.

According to a report by Politico, hospitals in Cyprus were unable to conduct the surgery, and so the young child was scheduled for the procedure in a hospital in Frankfurt.

However, a day before the boy was to be taken by air ambulance to Germany, the hospital cancelled the procedure over the fact that the parents were not jabbed against COVID-19.

A suggestion from the Cypriot authorities that the child instead travel for the surgery with a legal guardian instead of his parents was also refused.

Politico reports that the child was then refused surgeries in both the UK and Israel over his parents’ unjabbed status, both of whom subsequently received jabs on Thursday.

Alexey Matveev, the father of the boy, expressed his confusion regarding the decision after the Frankfurt hospital refused surgery.

“I know that unvaccinated patients are admitted to hospitals in Germany,” Matveev said.

“I didn’t know that I had to be vaccinated for my child being to be operated on in that hospital,” the Russian national continued. “If I knew it of course I would have done it … I am healthy and did not want to be vaccinated.”

According to Politico, a German health ministry official has confirmed that there were no rules in place preventing hospitals from treating unjabbed patients, let alone from treating patients whose parents have not been vaccinated.

However, the health official also made clear regarding the refusal that hospitals often set their own rules regarding vaccine restrictions.

“First Do No Harm”. What ever happened to those words, whatever happened to the medical profession, has greed been their downfall? Shame, shame on anyone calling themselves a doctor practicing in hospitals today! Doctor is now a word with a new meaning Doctor = Criminal and crimes against humanity. Shame.

I first heard about this insanity last week. It started last year. It makes me want to stop paying for healthcare. I’m beginning to wonder if non-covid jabbed people will one day be denied treatment for everything. I’m learning as much as I can about the nourishing the body’s major organs and immune system health, so that by the grace of God I may be able to spare myself and others future grief. I think it’s high time that people learn how to obtain or keep good health through detoxing and proper nutrition, so that we can all ditch the… Read more »

The day that non-jabbed people are denied access to food or care, will be the day when buildings start burning down to the ground. At least in this country. Maybe Canadians or Europeans in general are more subservient, to the point of their own deaths.

Good on you for preparing and learning!

I hope and pray that all these criminals will pay the full price for their gargantuan crimes.

The dark heart of the totalitarian is revealed. Human life is valued less than obedience to the collective.

I would sue that fcking hospital until there was not a brick left of their corrupt, mindless building!

I would take a different approach. Let’s say a “warmer” approach.

Ah yes, the Hypocritic Oath in action. It use to be the Hypocratic Oath. I’m kind of sick of these doctors and nurses who claim they practice medicine to the benefit of all mankind but obviously are only in it for the money as they determine who gets treatment or not based solely on their whims and desire to make more money. Note to all medical professionals. We want you to treate us as individual people instead of being outast because of government mandate that goes against real scientific data and not manufactured data by the media and politicians.

“German health ministry official has confirmed that there were no rules in place preventing hospitals from treating un-jabbed patients, let alone from treating patients whose parents have not been vaccinated.” In the IT business it was called the “software/hardware finger point.” Both are responsible but neither will own their responsibility, preferring to point at the other one, ignoring the facts, cooperation and good business. It’s much worse in this case. The “DO NO HARM” oath doctors take is/has been out the window in Germany since 2020 began–like country’s German namesake Josef Mengele, after whom the German medical community is modeling… Read more »