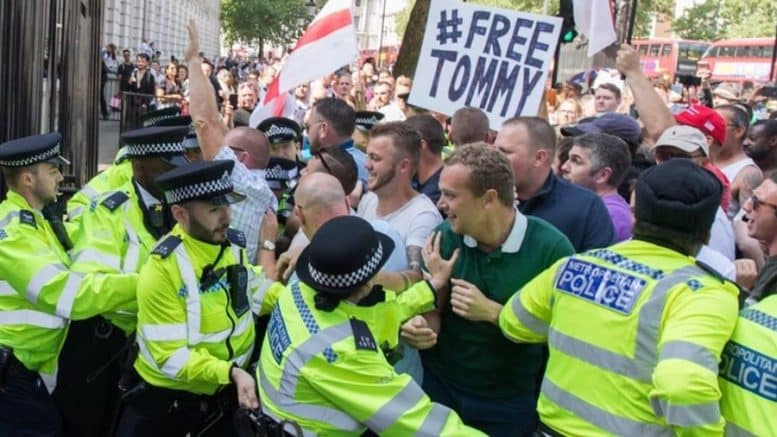 Free Speech has been dealt a lethal blow in England, where an activist reporter was railroaded into prison after covering a trial while broadcasting to social media.  His hour-long livestream to Facebook was watched over 250,000 time within hours of posting. The judge was enraged that Robinson encouraged people to share: “I regard it as a serious aggravating feature that he was encouraging others to share it and it had been shared widely. That is the nature of the contempt.” ⁃ TN Editor

As children, we are told that the law is objective, fair and moral. As we grow up, though, it becomes increasingly impossible to avoid the feeling that the actual law has little to do with the Platonic stories we were told as children. We begin to suspect that the law may in fact – or at least at times – be a coercive mechanism designed to protect the powerful, appease the aggressive, and bully the vulnerable.

The arrest of Tommy Robinson is a hammer-blow to the fragile base of people’s respect for British law. The reality that he could be grabbed off the street and thrown into a dangerous jail – in a matter of hours – is deeply shocking.

Tommy was under a suspended sentence for filming on courthouse property in the past. On May 25, 2018,  while live-streaming his thoughts about the sentencing of alleged Muslim child rapists, Tommy very consciously stayed away from the court steps, constantly used the word “alleged,” and checked with the police to ensure that he was not breaking the law.

Tommy yelled questions at the alleged criminals on their way into court – so what? How many times have you watched reporters shouting questions at people going in and out of courtrooms? You can find pictures of reporters pointing cameras and microphones at Rolf Harris and Gary Glitter, who were accused of similar crimes against children.

Tommy Robinson was arrested for “breaching the peace,” which is a civil proceeding that requires proof beyond a reasonable doubt. Was imminent violence about to erupt from his reporting? How can Tommy Robinson have been “breaching the peace” while wandering around in the rain on a largely empty street sharing his thoughts on criminal proceedings? There were several police officers present during his broadcast, why did they allow him to break the law for so long?

Was Tommy wrong to broadcast the names of the alleged criminals? The mainstream media, including the state broadcaster, the BBC, had already named them. Why was he punished, but not them?

These are all questions that demand answers.

Even if everything done by the police or the court was perfectly legitimate and reasonable, the problem is that many people in England believe that Tommy Robinson is being unjustly persecuted by his government. The fact that he was arrested so shortly after his successful Day for Freedom event, where he gathered thousands of people in support of free speech, strikes many as a little bit more than a coincidence.

Is the law being applied fairly? Tommy Robinson has received countless death threats over the years, and has reported many of them. Did the police leap into action to track down and prosecute anyone sending those threats?

If the British government truly believes that incarcerating Tommy Robinson is legitimate, then they should call a press conference, and answer as many questions as people have, explaining their actions in detail.

As we all know, there has been no press conference. Instead of transparency, the government has imposed a publication ban – not just on the trial of the alleged child rapists, but on the arrest and incarceration of Tommy Robinson. Not only are reporters unable to ask questions, they are forbidden from even reporting the bare facts about Tommy Robinson’s incarceration.

Why? British law strains – perhaps too hard – to prevent publication of information that might influence a jury, but Tommy’s incarceration was on the order of a judge. He will not get a jury trial for 13 months imprisonment. Since there is no jury to influence, why ban reports on his arrest and punishment?

Do these actions strike you as the actions of a government with nothing to hide?

Free societies can only function with a general respect for the rule of law. If the application of the law appears selective, unjust, or political, people begin to believe that the law no longer represents universal moral values. If so, what is their relationship to unjust laws? Should all laws be blindly obeyed, independent of conscience or reason? The moral progress of mankind has always manifested as resistance to injustice. Those who ran the Underground Railroad that helped escaped slaves get from America to Canada were criminals according to the law of their day. We now think of them as heroes defying injustice, because the law was morally wrong.

The inescapable perception that various ethnic and religious groups are accorded different treatment under the Western law is one of the most dangerous outcomes of the cult of diversity.

Diversity of thought, opinion, arguments and culture can be beneficial – diversity of treatment under the law fragments societies.

The blind mantra that “diversity is a strength” is an attempt to ignore the most fundamental challenge of multiculturalism, which is: if diversity is a value, what is our relationship to belief systems which do not value diversity?

Diversity is a value only if moral values remain constant. We need freedom of speech in part because robust debate in a free arena of ideas is our best chance of approaching the truth.

You need a team with diverse skills to build a house, but everything must rest on a strong foundation. Diversity is only a strength if it rests on universal moral values.

Is Tommy Robinson being treated fairly? If gangs of white men had spent decades raping and torturing little  Muslim girls, and a justly outraged Muslim reporter was covering the legal proceedings, would he be arrested?

We all know the answer to that question. And we all know why.

If the arrest and incarceration of Tommy Robinson is just, then the government must throw open the doors and invite cross-examination from sceptics. Honestly explain what happened, and why.

Explain why elderly white men accused of pedophilia are allowed to be photographed and questioned by reporters on court steps, while Pakistani Muslims are not.

Explain why a police force that took three decades to start dealing with Muslim rape gangs was able to arrest and incarcerate a journalist within a few scant hours.

Explain why a man can be arrested for breaching the peace when no violence has taken place – or appears about to take place.

To the British government: explain your actions, or open Tommy Robinson’s cell and let him walk free.