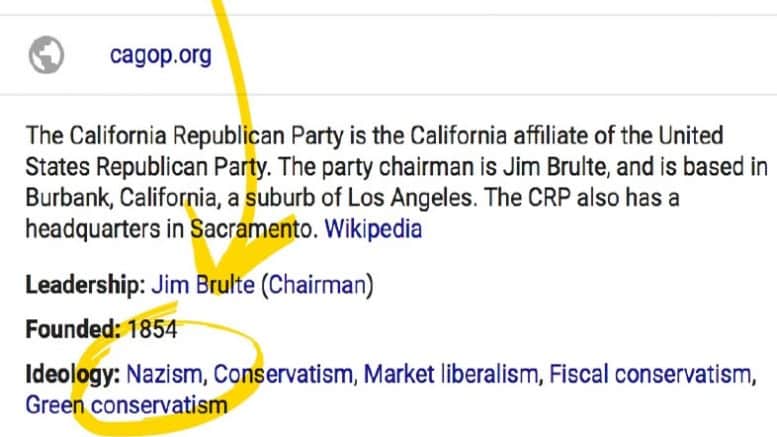 Don’t blame it on Wikipedia, either.

The Google culture absolutely detests republicans and conservative thought. Its own employees are shunned, redlined and even fired for the conservative beliefs.

When Vice News discovered that searching for “California Republican Party” on Google displayed an infobox listing its number one ideology as ‘Nazism’, even before Conservatism, Market Liberalism and Fiscal Conservatism, the Internet caught wind and was immediately enraged.

Google yanked the entire Ideology text area faster than the blink of an eye, but the picture was already posted all over the Internet.

Incredulously, Google blamed the incident on Wikipedia as ‘vandalism’:

We regret that vandalism on Wikipedia briefly appeared on our search results. This was not the the result of a manual change by Google. We have systems in place that catch vandalism before it impacts search results, but occasionally errors get through, and that happened here.

While there is no proof that a Google employee edited the Wikipedia page for the California Republican Party, how is it that the global leader of AI could not spot such a glaring misstatement?

Here’s how: I have stated several times that AI has been demonstrated to take on the same biases as its creators. If Google’s AI missed this, it was because of the bias inherited from its programmers.

The level of vitriol in Silicon Valley against conservatives is hard to fathom. Recently, my friend Michael Shaw erected an electronic billboard on the northbound 101 at the 880 interchange in San Jose. This was an expression of free speech and the sign rotated several images. Within hours of showing a pro-Trump message, the sign was vandalized with eggs, causing extensive damage to the sign, as seen by the white dots in the sign. 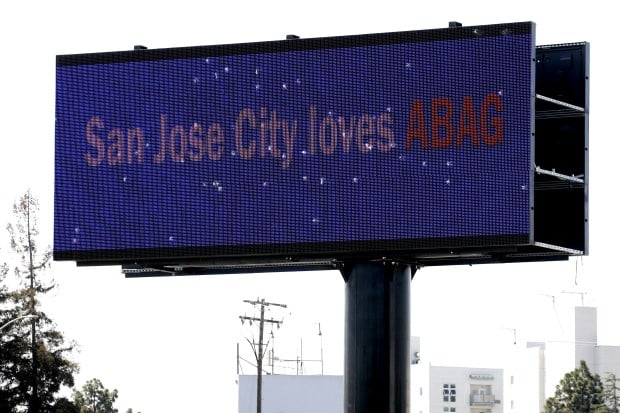 A new electronic billboard on northbound 101 at the 880 interchange in San Jose, Calif., shows signs of vandalism, Monday, April 9, 2018. The sign has been displaying political ads including one last week that supported the reelection of President Trump. (Karl Mondon/Bay Area News Group)

If you are thinking, ‘What’s a few eggs?’, just consider that this sign is on one of the busiest freeways in California. The vandals risked life and limb to stop and launch these calcified missiles.

Of course, there is no proof that any Google employees participated in destroying this sign, but the point of culture is made. The Technocrats in Silicon Valley hate conservative thought.

Ask Yourself These Questions… Who Was In Control Of The USA At The End Of WWII ??? Answer: Demoncrats / Libtards… Question: What Did The Demoncrats Do With The Leftover Nazis ??? Answer: They Recruted Them As Spys And Hid Them In Latian American Countries… ( That Is A Blatant War Crime / Aiding & Abetting / Racketeering / RICO / Etc… A Crime Punishable By EXECUTION !!! ) HENCE THE TRUE DEFINITION OF NAZISM IS (Add Communisium) : A PSYCHOPATHIC MENTAL DISORDER COMPOSED PURELY OF DEMONCRATS / LIBERALS WORLD WIDE… ITS RESERGENTS IS CURRENTLY BASED IN CALIFORNIA… Side Note:… Read more »