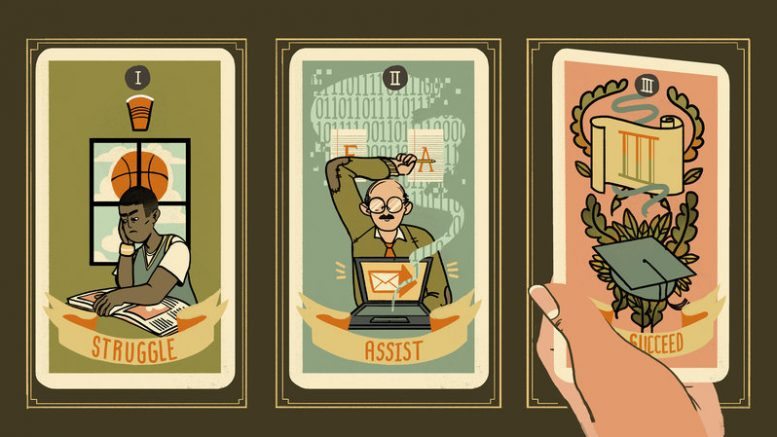 The Technocrat mindset is to track everything, all the time, and this is especially true in all phases of modern education. Students are mere statistical objects to be analyzed and manipulated. ⁃ TN Editor

On campuses today almost every educational interaction leaves digital traces. Assignments and feedback are given through online portals; debates and discussions happen via learning management systems as well as in classrooms, cafes and dorm rooms.

Those and other digital crumbs give technologists the opportunities to examine the processes, practices and goals of higher education in ways that were largely impossible a decade or so ago.

Another physicist-turned-education-innovator (is there something in the physics lab water?) named Timothy McKay sees great promise in “learning analytics” — using big data and research to improve teaching and learning.

McKay, a professor of physics, astronomy and education at the University of Michigan argues in a recent white paper, that higher ed needs to “break down the perceived divide between research and practice.”

There are privacy and ethical concerns, of course, which in turn has prompted fledgling codes of conduct to spring up.

I reached out to Professor McKay, who also heads Michigan’s Digital Innovation Greenhouse, to dig deeper on how learning analytics work in higher ed.

Give us an example of how new and better data is helping universities and professors understand students better.

I’ll give you an example that’s drawn from my own experience. I’ve been teaching here at the University of Michigan for more than 20 years. Most of my teaching has been large, introductory physics courses … from 400 to 700 students. Now, the way universities have traditionally done this is to provide a kind of industrial approach, to go to that large group of people and to offer them the same materials, ask them to do the same kind of activities at the same pace, and evaluate all those people in exactly the same way. Everybody gets the same course.

If it’s well-designed, it’s pitched perhaps for the median student in that class. It kind of works well for that median student, but it doesn’t work well for anybody else.

What I discovered when I began to look at data about my own classes is something that should have been obvious from the start but wasn’t really until I examined the data. I came to understand just how different all the students in my class were, how broadly spread they are across a variety of different spectra of difference, and that if I wanted to teach them all equally well, it doesn’t work to deliver exactly the same thing to every student.

Or different goals. A lot of times, the discussion will be about students who might be behind or at-risk, but it’s also true for students who are really excelling academically. They also need special kinds of attention. The first thing that happened for me was to open my eyes to the real challenge, the real importance of personalizing, even when we’re teaching at scale.

Then what followed that was a realization that since we had, in fact, information about the backgrounds and interests and goals of every one of our students, if we could build tools, use information technology, we might be able to speak to every one of those students in different ways to provide them with different feedback and encouragement and advice.

We’ve built this tool here called ECoach, which is a computer-tailored communication system that allows us to speak to a student with detailed knowledge of their background, interests and goals, and be able to do that at scale.

Some of that is automated, but you can tailor it to each student?

It’s interesting. It’s automated in a way, but in another way, it’s all generated by people. The content that we are going to provide, the way we create it, is to sit down together and look at the kinds of people who are present in our classes and think about how we would change the message if one of those students sat down in front of us.

We might be changing, of course, what we’re saying. Some students are very well prepared to take a physics class and, in fact, might have studied it for two years in high school before they get to my class. There’s one kind of message for them. There are other kinds of students who have never seen this subject before. And there, I might want to really focus on points like how taking a physics class is different from taking other kinds of classes that they have.

We sit down and think about what we would say to these people if they sat in front of us, and technology like ECoach just enables us to say it to all the students, instead of just the few who can get appointments in our office hours.

OK, say a bunch of freshmen in a 20th century American lit class, the papers they do for that class, is there relevant data there that could be useful in a learning analytics way?


Absolutely. That’s a great example of the new kinds of data that are emerging, the new forms of data. It used to be, when you and I went to college, that you wrote that paper for that class and you handed it in, perhaps, on typing paper. Right? The instructor took it and marked it up with a pen and handed it back to you, and then it was gone from the system. It left no record. The only record that it left, in fact, was the grade that your instructor wrote in a column in a little accounting book.