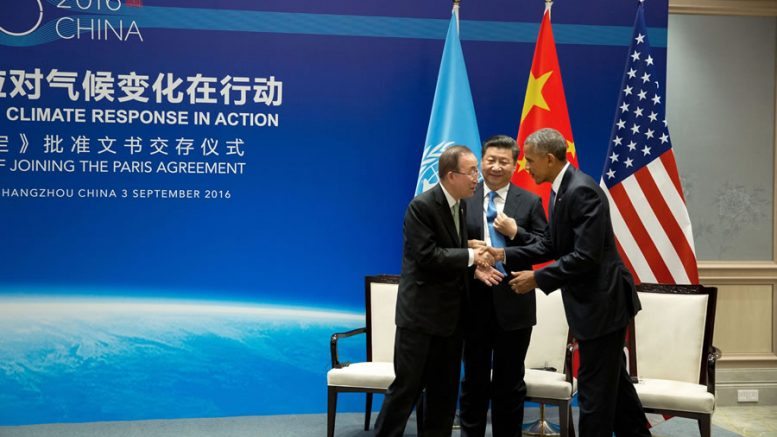 The Trump Administration apparently has no visible awareness of Technocracy, aka Sustainable Development, nor the danger posed by the United Nations around the globe. If perchance there is an invisible awareness, then the whole debate is meaningless and disingenuous. ⁃ TN Editor

Signs are mounting that US President Donald Trump’s administration may stay in the landmark Paris climate change accord of 2015, under pressure from big business and public support for the agreement.

But experts say the final decision, expected next month, is anything but certain, and staying at the table could come with significant caveats, like a weakening of US commitments to curbing greenhouse gas emissions.

“Given the unpredictability of decision-making by this administration, I am very reluctant to predict,” said Elliot Diringer, executive vice president of the Center for Climate and Energy Solutions.

“But there does seem to be a growing convergence around a strategy of staying in the Paris Agreement but lowering the US target.”

The latest word on the administration’s stance came from Energy Secretary Rick Perry, who said Tuesday he would not advise Trump to abandon the deal but rather renegotiate it.

That statement aligned Perry, the former governor of Texas, with Secretary of State Rex Tillerson, who formerly headed ExxonMobil and has spoken in favor of honoring the US commitment to the Paris deal, struck in 2015 and signed by more than 190 countries.

Trump’s daughter Ivanka, and son-in-law Jared Kushner — who both serve as his advisors — are also said to be in favor of the deal.

On Wednesday, 13 major international businesses ranging from energy to pharmaceuticals to retail urged Trump to adhere to the Paris accord.

“US business interests are best served by a stable and practical framework facilitating an effective and balanced global response,” said the letter signed by BP, Walmart, Google and others.

“We believe the Paris Agreement provides such a framework.”

Speaking at a TED conference Wednesday, former vice president turned environmental activist Al Gore said there is a “better than a 50-50 chance” Trump will honor the Paris deal.

Looks like the Globalists have their own version of Continuity of Government, which makes their plans unable to be interrupted by pesky populists movements and ideas of self governance. They will attempt to reverse Brexit. Apparently, they have already co-opted Trump. Orwell comes to mind, imagining a boot stomping on the face of humanity forever….