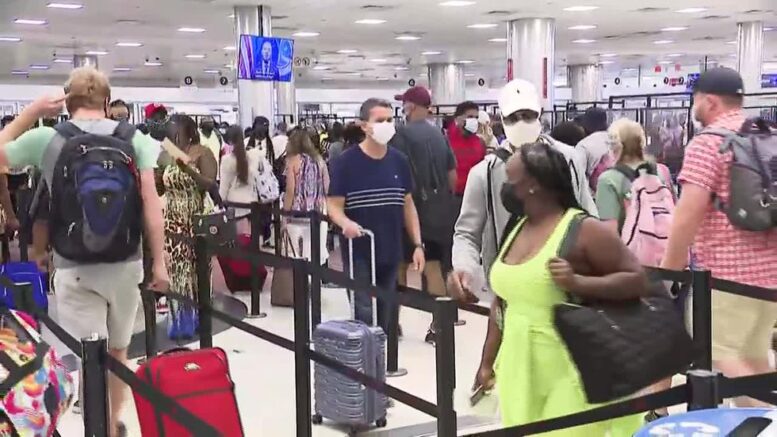 Please Share This Story!
PDF 📄
There is no science proving that masks are able to contain virus particles, and yet the world has gone mad to force people to wear them. Secondly, masks have been demonstrated to be harmful to the wearers and some people with other conditions should never wear a mask under any circumstance. ⁃ TN Editor

Federal officials are extending into January a requirement that people on airline flights and public transportation wear face masks, a rule intended to limit the spread of Covid-19.

The Transportation Security Administration’s current order was scheduled to expire Sept. 13. An agency spokesman said Tuesday that the mandate will be extended until Jan. 18.

The TSA briefed airline industry representatives on its plan Tuesday and planned to discuss it with airline unions on Wednesday. The mask rule also applies to employees on planes and public transportation.

The mask mandate has been controversial and has led to many encounters between passengers who don’t want to wear a mask and flight attendants asked to enforce the rule. The Federal Aviation Administration said Tuesday that airlines have reported 3,889 incidents involving unruly passengers this year, and 2,867 — or 74 percent — involved refusing to wear a mask.

Individual airlines declined to comment on the Biden administration’s decision, and their trade group, Airlines for America, said only that U.S. carriers will strictly enforce the rule. A broader group, the U.S. Travel Association, said the extension “has the travel industry’s full support.” The largest union of flight attendants said the move will help keep passengers and aviation workers safe.

“We have a responsibility in aviation to keep everyone safe and do our part to end the pandemic, rather than aid the continuation of it,” said Sara Nelson, president of the Association of Flight Attendants. “We all look forward to the day masks are no longer required, but we’re not there yet.”

The mask order, based on Centers for Disease Control and Prevention guidelines for responding to the pandemic, was first issued on Jan. 29, days after President Joe Biden took office. Before that, airlines had their own requirements for face coverings but former President Donald Trump’s administration had declined to make it a federal rule.

Like every other “woke” entity, the airlines are at the mercy of the technocrats in Washington. The contradictory narrative of masking and then cramming everyone into every seat on the plane really demonstrates the foolishness of this Administration’s desire to control rather than make sound decisions based on science. I for one will stop flying and demand Southwest refund all my air miles and cancel my mileage credit card if they resort to implementing a no-fly list for the unvaccinated. The lawsuits have already begun to injunct giving the gene therapy-eugenics-based jabs and the government will continue to abuse our… Read more »

Remember no shirts no service? It was never made into law, not even mandated by the government, but the government was able to push it because private businesses enforced it. It is the same thing with the mask and vaccine, businesses are making it a requirement for employment; the next step is customers. Don’t get me wrong, I agree with you 100% no one has the right tbecauseo dictate to someone else about their health. Last year, I learned how smokers feel everyone discriminates against them and they can’t smoke anywhere they want.

Stupid and typical of airlines. No science here just hearsay and lies from the “we don’t have no real data and the facts don’t matter” CDC fascist mouthpiece.

[…] Why I WILL NOT purchase an airplane ticket: TSA Extends Mask Mandate for all Airline Passengers and Employees […]

Hype the fear of this Covid 19 thing and start issuing readily acceptable mandates to condition
the sheeple to willingly give up their freedom and become nothing more than wards of the State.
So goes America!

[…] secretary for New York City’s law department, said that the city is reviewing the complaint. Technocracy News reported: Federal officials are extending into January a requirement that people on airline flights and […]

Joe Biden stated this past Sunday that the covid 19 pandemic was over. Now we’re back to mask mandates again? BTW, I heard Dr. Rashid Buttar state about 2 years ago that pandemics don’t last for years. No doubt here that if covid mass vaccination hadn’t been made an international religion. Society wouldn’t be dealing with never-ending covid variants, increased disease epidemics or multiple daily deaths from all age groups.