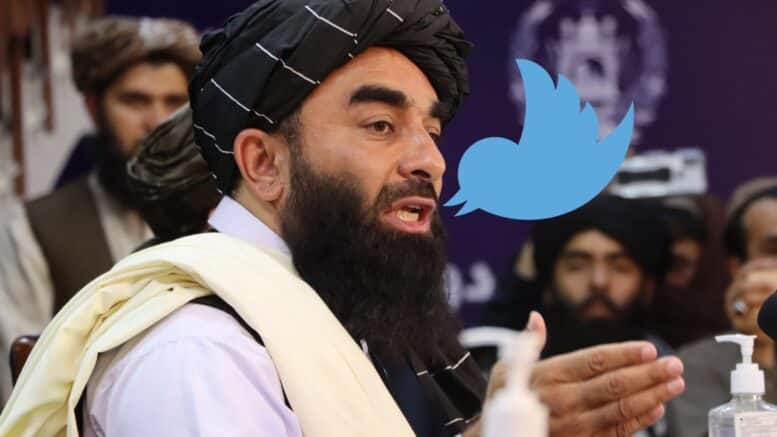 Please Share This Story!
PDF 📄
Anyone who wants to make the world a better place is quickly banned from Twitter. Conversely, the destroyers of societies are allowed to remain, like the Taliban which would like to behead every freedom loving American citizen. What’s wrong with this picture?

Facebook and Google, by contrast, banned all related parties from the Taliban. Twitter now stands alone as the world’s revolutionary messaging app and is complicit in the unspeakable deaths of women, children and innocent civilians in the Mideast. ⁃ TN Editor

Unlike former President Donald Trump, the faces and voices of the reconstituted Taliban regime in Afghanistan can apparently tweet to their hearts’ content.

In a statement obtained by Mediaite Tuesday, Twitter ducked the question of whether it would bar representatives of the Islamic fundamentalist government from getting their message out 280 characters at a time — saying only that it would “continue to proactively enforce” its rules outlawing the “glorification of violence, platform manipulation and spam.”

Both official Taliban spokesmen have unverified accounts on Twitter. One, Zabihullah Mujahid, has more than 310,000 followers. His most recent tweet as of Tuesday afternoon promoted a press conference by Taliban leaders and drew hundreds of responses, many of them from well-wishers.

“Dear Zabihullah Mujahid Saib, First of all, I welcome you and then congratulate you on the complete liberation of Afghanistan,” read a typical message.

The other spokesman, Qari Yousaf Ahmadi, has more than 63,000 followers, and gained notoriety during the recent fighting for tweeting reports about the capture of various cities as the Taliban swept through the Afghan countryside.

Big Tech critics have expressed outrage over Twitter’s tolerance toward the Taliban after it banned Trump in the aftermath of the deadly Jan. 6 riot at the US Capitol. The company also recently suspended Rep. Marjorie Taylor Greene (R-Ga.) after she questioned the efficacy of COVID-19 vaccines, but has permitted accounts affiliated with repressive governments like China and Iran to spread anti-American and anti-Israel propaganda.

“Why on God’s green Earth does the Taliban spokesman have an active Twitter account but not the former President of the United States?,” Rep. Madison Cawthorn (R-NC) tweeted Sunday. “Who’s [sic] side is the AMERICA BASED Big-Tech companies on?”

“Freedom and democracy are not doing well when #Twitter continues to ban #Trump’s account but relays the #Taliban spokesperson’s without any second thoughts,” agreed Jérôme Rivière, a member of the European Parliament representing France’s far-right National Rally party.

The only sensible reason I can think of to allow terrorist groups to continue tweeting is to keep a pulse of continuous surveillance upon them and their followers. You gott’a figure they are pretty stupid to use the platform anyhow.

The other bans are completely unjust technocratic hockey. Those are intended to stop freedom in all forms.

The USA doesn’t need the twat at twatter to do S#*&. These are evil turds and one day they will be flushed accordingly.

Maybe so but the CIA uses Twitter as much or more than the general public.

Sooooo. I was kicked off but the Talib’s. are fine….nuff said

Ever seen a photo of Jack Dorsey?
Compare it to a photo of every Taliban Achmed out there.

it wouldn’t surprise me if Dorsey hasn’t already doxed some users info to the taliwhaxers so they could go door to door here.