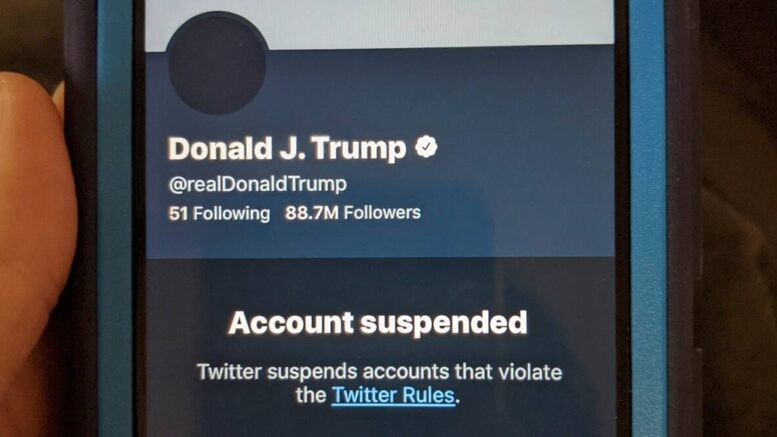 Please Share This Story!
PDF 📄
Twitter, like Facebook, Apple, Google and Amazon, thinks it can hide behind its own terms of service while destroying the basic human right to free speech of millions of Americans. Meanwhile, congress and states do nothing to correct them. This is the end result of Technocracy. ⁃ TN Editor

In a Monday night blog post, Twitter lays out all the latest details of a historic purge that started with the suspension of president Trump and has escalated into the ban of tens of thousands of conservative voices, or as Twitter puts it, “steps taken to protect the conversation on our service from attempts to incite violence, organize attacks, and share deliberately misleading information about the election outcome.” Odd how none of those considerations emerged during the summer when US cities were literally burning as a result of countless violent protests and frequent riots, but we digress.

In any case, In twitter’s own delightfully ironic words, “It’s important to be transparent about all of this work as the US Presidential Inauguration on January 20, 2021, approaches.” Which is a probably a good idea in the aftermath of the biggest censorship purge in twitter history, one which sent Twitter stock tumbling. So this is what how twitter justifies “the purge”:

We’ve been clear that we will take strong enforcement action on behavior that has the potential to lead to offline harm. Given the violent events in Washington, DC, and increased risk of harm, we began permanently suspending thousands of accounts that were primarily dedicated to sharing QAnon content on Friday afternoon.

And with tens of thousands of accounts suspended (most of them permanently), banned, or merely disappeared, it will hardly be a surprise that according to Tiwtter, “more than 70,000 accounts have been suspended”. What is the justification? “These accounts were engaged in sharing harmful QAnon-associated content at scale and were primarily dedicated to the propagation of this conspiracy theory across the service.”

More in the full blog post below. Meanwhile, as BofA warned today and as traders clearly agreed, Twitter now faces the risk of wholesale “churn”, i.e., exodus, by the conservative community in response to this unprecedented crackdown, which could see tens of millions of MAUs gone:

Donald Trump had 88mn followers on Twitter, the 6th most followed account, and on Facebook he had over 33mn followers. President Trump’s follower count represents 47% of Twitter’s daily active users (DAUs) (though clearly not all followers are DAUs), with his account averaging 34 Tweets per day in 2020 (up from 21 in 2019). Additionally we see churn from the conservative community within Twitter as a modest 1Q DAU threat, however SensorTower suggests DAUs on Parlor (a conservative focused alternative) is roughly 130k (0.37% of Twitter’s US DAUs) as of January 8th. Our call is that after some deactivation newsflow near-term, strong political activists will stay on Twitter for other content.

In June, The DoJ had a proposal to rollback some Section 230 protections, which specifies that Internet companies are generally not liable for user posted content. While a Democratic administration may be less focused on significant reform of Section 230, recent events may make content legislation more likely. While we think social platforms may welcome content guidelines, risks of a rollback of Section 230 include: 1) potential civil liability arising from victims of Online content, and; 2) expense risk from need to increase content review capabilities. Facebook CEO, Mark Zuckerberg, has been vocal in embracing an update to Section 230, while Twitter CEO, Jack Dorsey, noted “Eroding the foundation of Section 230 could collapse how we communicate on the Internet, leaving only a small number of giant and well-funded technology companies”.

And now we wait to find out just how extensive the conservative user “churn” has been.

An update following the riots in Washington, DC

Following the horrific events in Washington, DC, last week, here are some of the steps we’ve taken to protect the conversation on our service from attempts to incite violence, organize attacks, and share deliberately misleading information about the election outcome. It’s important to be transparent about all of this work as the US Presidential Inauguration on January 20, 2021, approaches.

We’ve been clear that we will take strong enforcement action on behavior that has the potential to lead to offline harm. Given the violent events in Washington, DC, and increased risk of harm, we began permanently suspending thousands of accounts that were primarily dedicated to sharing QAnon content on Friday afternoon.

Many of the individuals impacted by this updated enforcement action held multiple accounts, driving up the total number of accounts impacted. Since Friday, more than 70,000 accounts have been suspended as a result of our efforts, with many instances of a single individual operating numerous accounts. These accounts were engaged in sharing harmful QAnon-associated content at scale and were primarily dedicated to the propagation of this conspiracy theory across the service.

As stipulated in this policy that we announced ahead of the 2020 US election, accounts that have Tweeted or Retweeted associated content will continue to be subject to limited visibility across search, replies, and on timelines and are prohibited from being recommended to others by Twitter. It’s important that these types of accounts — that are not predominantly engaged in sharing this material — can see different perspectives in the open public conversation that Twitter uniquely provides.

Our teams are discussing ways we can empower research into QAnon and coordinated harmful activity on Twitter.

During the past several weeks, misleading and false information surrounding the 2020 US presidential election has been the basis for incitement to violence around the country. We took action on these claims in line with our Civic Integrity policy

Now that the results of the election have been officially certified by Congress, we updated our Civic Integrity policy on Friday to aggressively increase our enforcement action on these claims. The updated policy provides details about how we enforce against violations of this policy, including repeated sharing of Tweets that receive warning labels. Ultimately, repeated violations of this policy can result in permanent suspension.

Our teams are continuing to aggressively deploy technology to surface potentially harmful Tweets for human review in an effort to take action as quickly as possible on violative content. Using this combination of technology and human review helps our teams work at scale during this critical time. We continue to update these tools as terminology and behaviors evolve on Twitter.

On Tuesday, we limited engagement by no longer allowing any Tweets labeled for violations of our civic integrity policy to be replied to, Liked or Retweeted. People on Twitter are still able to Quote Tweet to share this content with additional context or their own perspective.

We want Trends to promote healthy conversations on Twitter. This means, at times, we may prevent certain content from trending. There are rules for Trends, and if we identify Trends that violate these rules, we’ll take enforcement action.

Since last week, we’ve prohibited certain terms from surfacing in Trends and Search suggestions based on the following Twitter Rules:

We will also continue to prioritize reviewing and adding context to Trends. Our goal is to help people see what’s happening while ensuring that potentially confusing trends are presented with context.

It is against the Twitter Rules to engage in spamming behavior, including bulk, aggressive, or deceptive activity. That’s why we routinely deploy anti-spam challenges to accounts to fight this behavior and protect the public conversation. During these challenges, account owners must verify their authenticity through a variety of measures, such as reCAPTCHA or providing a functional email address.

As always, while accounts are undergoing these challenges, they’re temporarily removed from follower counts. This, along with our updated enforcement around coordinated harmful activity, means some people may notice drops or fluctuations in their follower count.

Ahead of the inauguration, we’ll continue to monitor the situation, keep open lines of communication with law enforcement, and keep the public informed of additional enforcement actions.

American has been taken over. Jesuit magazine even posted today, “Impeach, Convict, Now”. Something is up!!!!!!! Are we going to let them do this? They want to kill all Trump supporters, Christians or whomever will not go along. May God have mercy!

Here is the link: https://www.americamagazine.org/ These are Satan’s army

As always–The corporations running the conversation are making up their own rules and so-called ‘policies’ (enormous BS) to control the covid Narrative. As the author notes, they didn’t lift a finger to stop the leftist extremists from pulling down federal monuments, black suited mask wearing violence seekers pounding the general public at political rallies Twitter clearly supported in FULL or protests from self-identifying extremists calling themselves Democrats and BLM when that was happening. Twitter supported them all. Twitter’s CEO is a bad liar who lives in a trash heap of lies so high he can’t see the truth any longer.… Read more »

The covid madness is the narrative of both Republicans and Democrats. The liberal media and the Conservative media. The worst of all is that the narrative has infiltrated the ‘church’ and so we have a complete takeover of society for the covid takeover of the world. A bogeyman. We must have bogeymen all the time always which disarms the people. The fear factor keeps people from doing what mankind was meant to do when God created him. God wanted all mankind to know Him personally through His word the Bible.

Whie the First amendment is clear that you cannot yell fire in a crowded theater or incite violence ; the ” coordinated harmful activity” mandate is particularly concerning in that the corporate speak about Covid, vaccines, lockdowns,finance and everything else will be the only one we are allowed to hear. JFK Jr ,Mercola,and Barbara Loe Fisher [NVIC.org for 30 years] have been declared terrorists for telling the truth and they are using military intelligence to try to silence them. Brandy Vaughn [former Merck drug rep whistleblower] was murdered to shut her up. Fauci is a traitor who consorted with the… Read more »

Technocrats (and perhaps even their dupes) can’t stand free speech, free association and so on, partly because they have things to hide.

People who accept being enslaved under their governments for no good reason worship government as God. This is the horrible truth that is mostly unspoken.

…now is the time evil will have to give room to goodness after having dominated the human world for so long.