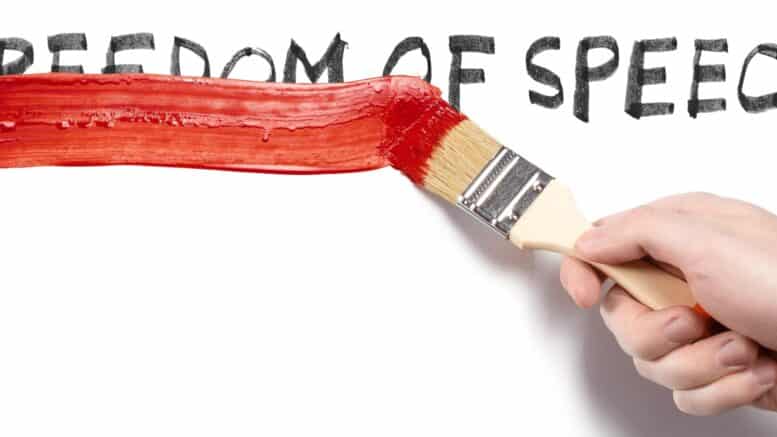 America’s foundational rights are set out in the First Amendment. Without the freedoms expressed in that amendment, there is nothing to protect us from totalitarianism, aka Technocracy. Yet we are currently in the midst of a very sustained attack on the right, and the attack is coming via methods too many fail to recognize.

The First Amendment in the Bill of Rights contains five separate statements that when taken together underscore the necessity of communication required to maintain a Constitutional Republic:

Congress shall make no law respecting an establishment of religion, or prohibiting the free exercise thereof (1); or abridging the freedom of speech (2), or of the press (3); or the right of the people peaceably to assemble (4), and to petition the Government for a redress of grievances (5).

Much has been already said about instances of “summary judgment” censorship by various Big Tech media players like Facebook, Twitter, and Google, but few have considered the more ominous asymmetric warfare being waged against the First Amendment in its entirety.

While America has almost 330 million citizens and well over half still have great respect for the Constitution, those who would destroy the First Amendment have launched an all-out stealthy, coordinated, and intentional high-tech attack against each element noted above.

In every revolution over the past 150 years, the first wave of attacks always focused on taking over communications networks: Radio and TV stations, newspapers, and public forums.

Thanks to the “Great Panic of 2020” driven by an invisible virus, this is exactly what has just happened in the U.S. Instead of being driven by thugs with guns and tanks, however, it was accomplished with high technology, pseudo-science, and misrepresented statistics.

The policies resulting from COVID-19’s fear and propaganda are the common thread in the communication takeover:

A second aspect of all revolutionary takeovers is the destruction of civilizational knowledge. Historical documentation of book burnings is legendary from the 1918 Bolshevik Revolution in Russia to Nazi Germany in the 1930s and China under Mao Zedong in the 1940s. Books and historical papers represent historical touchstones that would keep citizens from accepting their new reality.

While we normally think of freedom of the press as related to the present, it stretches far back in history. Thus, it’s not enough to censor current literature and journalism, but also that of the past.

Access to public and university libraries — where physical books are located – has been almost completely shut down during 2020.  During that time, electronic “book burning” has begun in earnest as certain authors and topics are being rapidly expunged from electronic media.

The implication of these attacks is very alarming. If they are indeed the first wave of a revolutionary coup d’état, then we must immediately prepare for the main invasion.

The greatest question, however, is who are we really fighting? Marxists? Communists? Socialists? Fascists?

I suggest that it is none of these because all of the above attacks are related to scientists and Big Tech who appear to be working closely together to bring this about. More likely, these people are Technocrats. They are not interested in collectivism but rather total domination and outright Scientific Dictatorship.

Nevertheless, they are well underway to flipping the world into the World Economic Forum’s vision of The Great Reset, which is rife with elements of Technocracy and Transhumanism. Along the way, Capitalism and Free Enterprise must die and the will of the American people must be forced into submission.

The First Amendment and our ability to communicate freely may be the first major casualties of this revolution but it is not yet a fait accompli.

America must not go down without a fight. The rapidly expanding national membership of Citizens for Free Speech is mounting its own counter-initiative to preserve and defend the First Amendment to rebuild its functionality from the bottom up. It could be too little, too late, but we encourage all Americans to join us to take a stand.

Indeed, if America is ultimately silenced by its Technocrat invaders, then all else will be lost.

The First Amendment is a prohibition that only applies to the federal government. It does not prohibit private corporations. Users of social media have a private use agreement with the various social media app designers, whereby they as users agreed to terms of service, and those end users by their voluntary free will entered into terms with the social media conglomerates. It is impossible to disagree with one’s own agreement. The fact remains if you disagree with the terms of service, it is your right to abandon the premises. But there is no legal recourse for an end user to… Read more »

This seems to be crazy talk… I’m sure when you have surgery or visit the dentist you ask your doctor to wear a “face diaper”. Of course the virus is invisible. Your computer, phone, tablet are radiating invisibile radiation rigth now… you should destroy it.