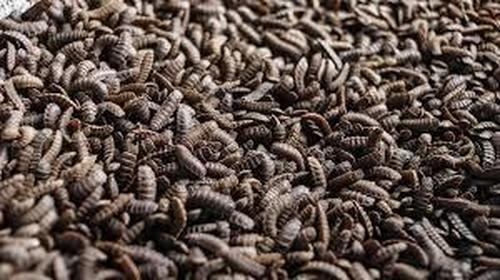 Please Share This Story!
PDF 📄
The United Nations wants to eliminate poverty and hunger by feeding insect protein. Thanks to Ag mega-giant ADM, Illinois will soon become home to the largest insect farming operation in the world, dwarfing all other efforts. ⁃ TN Editor

The food industry is about to take a giant leap forward towards sustainability as a new partnership between Chicago-based food processing company Archer Daniels Midland and InnovaFeed, a French firm that makes insect protein for animal feed, are set to build the world’s largest insect protein factory farm in central Illinois, according to Forbes.

ADM and InnovaFeed will grow and harvest billion and billions of insects called black soldier fly, whose larvae are scavengers and thrive on decomposing organic matter and convert it into a nutrient-rich protein that can be transformed into animal feed.

Once the facility is operational, both companies estimate yearly output could be around 60,000 metric tons of animal feed protein.

“I’m in awe. If they can pull this off, it will be magnificent,” said Jeffrey Tomberlin, a professor and entomologist at Texas A&M University who has conducted years of research on insect protein

“This facility will be several times bigger than anything else in the world,” Tomberlin said.

Black soldier fly larvae produce at least one hundred times more protein per acre than traditional animal feed sources such as corn, soybeans, sorghum, oats, and barley. This could be a monumental achievement for the agriculture industry as a bid for sustainably sourced food when pandemic-related shortages have developed, along with soaring prices.

Edwards, quoting the latest figures from the UN’s Food and Agriculture Organization (FAO), showed food prices of oilseeds, dairy products, meat, and sugar are on the rise. Show below, the FAO food index hit a sixth-year high in November.

“At a time when the World Bank notes that the Covid-19 pandemic will increase extreme poverty by around 150 million, we all need to be very vigilant of another food price bubble,” Edwards warned.

He also links soaring food prices to the Federal Reserve’s easing policies that caused a rapid jump in food prices in 2011, resulting in social unrest in multiple countries.

I’m honestly disgusted just by the thought of eating bugs.

Petrichor
Reply to  Enough is Enough

A step towards Solent Green. . .

Bugs or nothing. As Covid is developing as endless story all real meat producers will soon be bankrupt. And who can have a cow at the balcony?

I hate these people

Where are the links to the RESEARCH that has been done?? to prove that this is NOT going to be another GMO/vegetable fiasco????? Still giving Antibiotics’ given to the animals?

Where can the Public get answers on the truth about this hyperbole and the usual PR companies talking head information outlets that are thrust upon us??

Once more the USA especially, Worshipping at the ALTAR OF GREED. This is not being done for the benefit of mankind or the animals and Planet.

[…] The United Nations wants to eliminate poverty and hunger by feeding insect protein. Thanks to Ag mega-giant ADM, Illinois will soon become home to the largest insect farming operation in the world, dwarfing all other efforts. ⁃ TN Editor […]