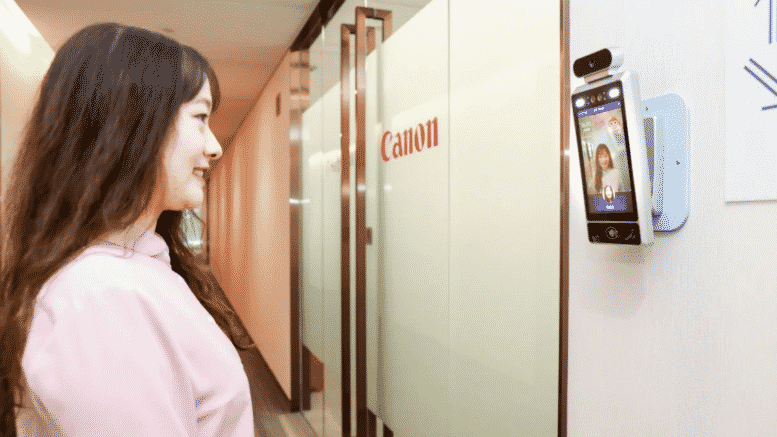 Please Share This Story!
PDF 📄
Technocracy defined itself as the “science of social engineering” and Canon in China fits perfectly by demanding that employees smile to gain access into offices and conference rooms. This article properly calls this manipulation trend “modern-day Taylorism”. ⁃ TN Editor

Tech company Canon has come up with a downright dystopic way to tackle the problem of workplace morale: it’s installed cameras with AI-enabled “smile recognition” technology in the offices of its Chinese subsidiary Canon Information Technology. The cameras only let smiling workers enter rooms or book meetings, ensuring that every employee is definitely, 100 percent happy all the time.

This depressing tale was highlighted in a report from The Financial Times on how Chinese companies are surveilling employees to an unsettling degree with the help of AI and algorithms. Firms are monitoring which programs employees use on their computers to gauge their productivity; using CCTV cameras to measure how long they take on their lunch break; and even tracking their movements outside the office using mobile apps.

As the King’s College London academic Nick Srnicek told the FT: “Workers are not being replaced by algorithms and artificial intelligence. Instead, the management is being sort of augmented by these technologies […] Technologies are increasing the pace for people who work with machines instead of the other way around, just like what happened during the industrial revolution in the 18th century.”

Canon Information Technology actually announced its “smile recognition” cameras last year as part of a suite of workplace management tools, but the technology doesn’t seem to have gotten much attention. Indeed, the fact it passed under the radar is a good illustration of just how common surveillance tools like this are becoming — and not just in China.

Although readers in the West sometimes have a tendency to dismiss the sort of surveillance described by the FT as a foreign phenomena, countries like the US and UK are just as culpable. Amazon is perhaps the prime example of this dynamic: it’s known for squeezing every ounce of effort from its warehouse workers at the expense of their health, and even ranking their productivity using algorithms before firing those at the bottom of the scale.

Good comparison used in the Industrial Revolution (IR). That era was a time in which workers were led to riot for lack of freedom, personal safety and forced child labor (as young as 7-yrs) as well as mistreatment by owners in their daily work environment. Protective laws were put into place by workers due to the terrible conditions. Those laws were expanded over time, remaining in place today. The IR era’s compassionless profiteers put their personal profit goals ahead of the lives and damaged bodies of their workers. The same people are still handing out the same oppression in these… Read more »