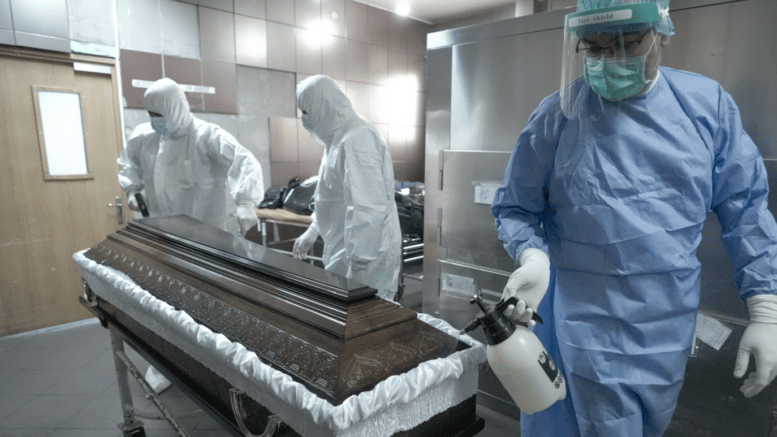 Please Share This Story!
PDF 📄
When scientists and statisticians say that they “cannot ascribe a reason” for skyrocketing death rates, they ignore the elephant in the room and say “we refuse to ascribe a reason”. All of this could be stopped in a myocardial minute with the worldwide cessation of mRNA injections. ⁃ TN Editor

European countries are currently experiencing an unusually high death rate, and coronavirus deaths are not the direct reason for this increase. Known as “excess mortality,” people are dying at an unusually high rate in the Netherlands, Germany, Spain, Portugal, and Great Britain.

Since April, the death rate has risen sharply in Europe by an average of 11 percent. What is puzzling experts is that these deaths are not directly related to the coronavirus pandemic.

In the Netherlands, according to de Volkskrant, one of the top newspaper in the country, hundreds of people more are dying every week than usual. This means that since the spring, approximately 5,000 more deaths are being recorded compared to the period before coronavirus. Scientists are puzzled by the reason, but Dutch health agencies refuse to release data behind the cause of deaths due to what the agencies say is related to privacy concerns.

Some have criticized this approach, with popular Dutch commentator Eva Vlaardingerbroek saying that matters of health privacy were universally suspended when the Dutch government decided to check everyone’s vaccination status before they began entering restaurants and shopping establishments.

🇳🇱 “Hundreds of excess deaths per week and nobody knows why.”

Everybody knows why, but the Dutch government is withholding vaccinations records because of – you guessed it – ‘privacy reasons’. pic.twitter.com/S7I7Pic9Wk

However, excess deaths are even worse elsewhere, with Germany’s top-selling Die Welt newspaper reporting that the situation is especially drastic in Spain. In July 2022, Spain registered almost 10,000 more deaths than in the same month of 2019, while in Germany, the climbing death rate was not as dramatic but still a matter of concern.

To some extent, the rising death toll in Spain can be accounted for with coronavirus infections, but only 1,872 deaths were attributed to Covid-19, and another fifth were due to the extreme temperatures this summer, according to the statistics analyzed by the Carlos III Health Institute, which specializes in monitoring heat damage.

However, many of the deaths cannot be accounted for, a fact acknowledged by the Spanish government, which has ordered a detailed investigation with results expected in six months. Some experts say it is already clear the research should not focus on Covid-19 or the heat.

Peiró says the rising death toll is “incomprehensible,” above all because he sees many old and chronically ill people among the deceased. Despite this group being highly vaccinated on average, they were still the most at-risk individuals to die from Covid-19.

“What is puzzling experts is that these deaths are not directly related to the coronavirus pandemic.”

Have you EVER seen such a coverup by so many for so long? I’ve not. Puzzling? What is puzzling here except the outright stupidity, compliance and political fascism pushing the lies along.

COMPLETE COMPLIANCE WITH THE MURDEROUS POLITICOS, ALL THEIR ALPHABET AGENCY MINONS OF CRIMINALS INVOLVED IN THE DEMOCIDE AND NOW COSMOCIDE OF PLANET EARTH!

I’m afraid that excess deaths cannot be stopped simply by ending injections. The spike proteins continue to create an immune response within the body after receipt of the vaccine and the ‘experts’ have no idea how long they will persist. So even if the injections were stopped tomorrow, excess deaths will continue for who knows how long?

So many silent weapons being used, your brains couldn’t fathom them, but they surround you and are in you. Silent weapons for a quiet war. 😉 Shh
Did you know Both the brain and heart have neurons? Lmao, this will be deleted

The Rates Of Unexpected Deaths Are Rising Across Europe - Vaccine Effects

[…] Technocracy News reports: Since April, the death rate has risen sharply in Europe by an average of 11 percent. What is puzzling experts is that these deaths are not directly related to the coronavirus pandemic. […]

It’s not puzzling me or many other regular citizens do God only knows who all is on the take. The small town I live in, right before this Plandemic, a slew of Doctors abandoned their practices! I’m sure it was connected but I don’t know exactly how!

[…] Technocracy News reports: Since April, the death rate has risen sharply in Europe by an average of 11 percent. What is puzzling experts is that these deaths are not directly related to the coronavirus pandemic. […]

I just wrote Ted Cruz and ask why nothing is being done while all this excess death occurs under his watch! This has got to be addressed on a criminal level NOW. But no this poison continues to be distributed so a citizen starts to believe these Senators are involved!

Everyone seems unwilling to recognize the obvious: It’s the “clot shot” that’s intended to help reduce global population. If you listened to Bill Gates TED talk, he said there are 9 BILLION too many world inhabitants. He advocated use of vaccines as a solution. Well, we got several “vaccines” and they are working according to plan. WE MUST NOT MENTION THAT. If too many people are aware of the purpose of the shot, they will not want to be “vaccinated”.