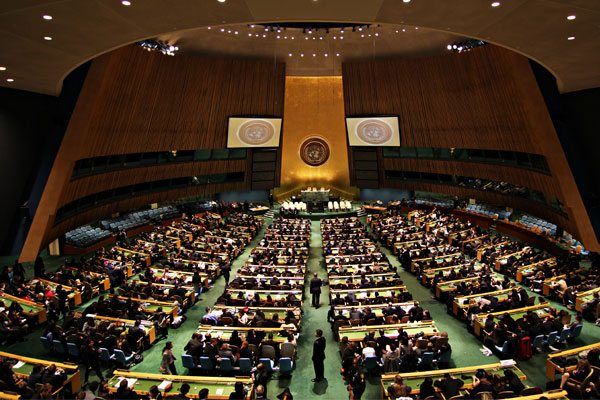 Senior leaders of the United Nations gathered recently to continue plotting the future of globalized pseudo-education, which they said must be imposed on every child on the planet to advance the UN’s radical plan for humanity known as “Agenda 2030.” Speakers at the so-called “High-Level Event on Education,” including Muslims and communists, all agreed that UN-led “education” was the key to realizing their globalist goals.

The UN’s controversial agenda, also dubbed the “Sustainable Development Goals” or SDGs, is basically a recipe for global government, technocracy, and socialism. And it includes the UN’s vision of “education” at the heart of it all. Under Agenda 2030, children are described as “critical agents of change” whose “infinite capacities for activism” will be weaponized and channeled by the UN’s “education” schemes into advancing the planetary entity’s vision of the future.

The whole program, and especially the education component, is being justified under the guise of imposing “sustainable development” on the world. And as far as the nebulous, totalitarian concept relates to education, the UN has already made clear that more education is actually a threat to sustainability.

Beyond that, when speaking of the UN’s “sustainable development” ideology, which was formulated with crucial assistance from the mass-murdering communist dictatorship ruling China, it has become clear that the UN really means population control, central planning, global governance, and other deeply totalitarian schemes. In fact, the UN barely bothers to conceal that anymore.

In Goal 4 of the 17 SDGs, the UN makes clear that its “education” is really indoctrination. For example, the document, which has not been ratified by the U.S. Senate, demands that all children learn not to just accept and submit to “sustainable development,” but to actually “promote sustainable development.” The indoctrination program is also heavy on the UN’s vision of “human rights,” which are essentially the opposite of the God-given rights enshrined in America’s founding documents.

And yet, at the UN education summit in late June, UN leaders put a smiley face on it all. “I am confident you all agree that inclusive, equitable and quality education goes to the heart of the 2030 Agenda,” explained President Peter Thomson of the UN General Assembly, which is dominated by regimes classified as unfree. Because brainwashing children will be critical to imposing the UN’s anti-liberty, anti-Christian agenda on humanity, Thompson called the UN’s idea of education the “golden thread that runs through the implementation of all 17 SDGs.”

“We must educate young people about the logic of the 2030 Agenda for Sustainable Development,” he added, never allowing for the possibility that children may not agree with globalism and wealth redistribution. “They must be taught to take ownership, to serve as agents for change, and to be drivers of innovative ways of achieving the SDGs.”

The changes being proposed are drastic, too. “We have to do no less than transform the way we think, invest, partner, and deliver on education,” Thompson said, demanding all children be subjected to “universal early childhood education.” “We need coherent, practical strategies for the development of children’s physical, cognitive, and emotional skills to set up positive adult productivity and behavior.” At a previous summit, they even called for the UN to shape children’s “spirituality.”

The UN is getting bolder and bolder in the quest to brainwash children all over the world with its dangerous ideology. For the sake of faith, family, and freedom, Americans must resist.

The entire UN needs bulldozed into the East River. WITH the occupants locked inside

We are reaching a “100th Monkey” nexus of some sort and the controllers are starting to get concerned. Similar to when the slave owners kept the field hands illiterate but the House Mammy’s taught them to read from the bible she used for teaching the white kids the Internet is freeing minds not bodies. History tells us the importance of knowledge to the ancestors. Special times and places were important to Tribal cultures to pass on understandings of life. The destruction of libraries, ceremonial practices, Shaman and Medicine Men and Women, etc. are examples of controlling knowledge. “The control of… Read more »

Educated people threaten the sustainability argument, not sustainability itself. It is an educated populace that makes it possible for the west to produce enough to feed itself. Enough food? That too, but enough in general.

They have identified women too as ‘agents of change’:

“In 2015, the world agreed on the Sustainable Development Goals, and a 2030 deadline to achieve them. Women will be central in realising this ambitious plan” – IUCN Director General’s statement on International Women’s Day 2017

Gender Day … focusses on women as leaders, innovators, and agents of the transformational change that the challenge of climate change and achieving sustainable development demands. Source: Why is Gender and Climate Change important?