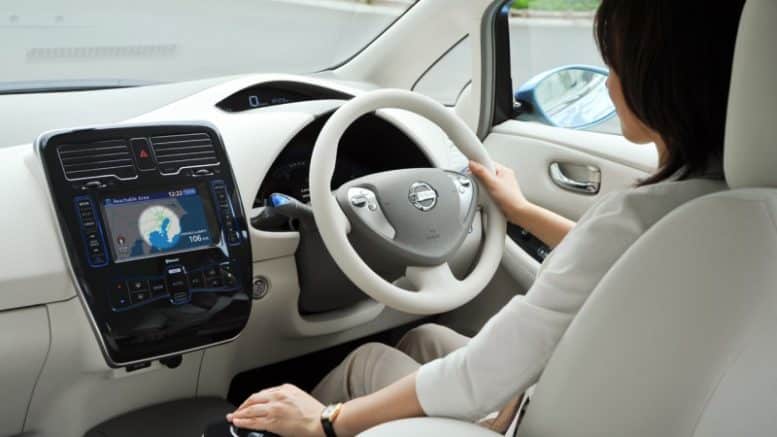 To a Technocrat, it’s not about transportation, its about data, and your car is just one giant sensor that can report on your every activity. A rolling smartphone? Furthermore, your car will routinely rat on you by transmitting your data wirelessly to mobile collection devices. ⁃ TN Editor

Picture this: You’re checking your friends’ Facebook updates on the windshield display screen while your car drives you to the other side of town.

Suddenly, a coupon for a special deal at the Applebee’s a mile ahead pops up because the car remembers you stopped there two months ago. It asks if you’d like to pre-order your two-for-one special so it’s ready when you arrive. Then it sniffs out the spot closest to the front door and parks you.

It’s a scene that could play out in the not-so-distant future.

The average car already produces enough data from the engine, infotainment system and other components to fill an iPhone in less than an hour. As cameras, radar and sensors on self-driving cars begin to gather even more information, carmakers and auto suppliers are expected to sort that information and sell it to marketers eager to cater to your living-room on wheels. By 2030, some forecasts say all that data could have generated as much as $750 billion.

For now, data generated by vehicles doesn’t leave the automaker, where it is used to monitor performance to improve the next generation — or signal that it’s time for an oil change or other maintenance.

But Ford President and CEO Jim Hackett in May spoke of a time when Ford could pair global-positioning information with traffic data and work with a company like Starbucks so the car could tell the driver that one location has a four-minute wait, but the Starbucks three highway exits ahead has a shorter wait time.

Drivers could order and pay for their Frappucino before getting in the drive-through line, and it would be ready when they hit the window.

David Ploucha, president and CEO of Allen Park-based Control Tec, a company that works with carmakers to sift through data for the “important” nuggets, sees a future when a repair shop would know that a passing truck needs an oil change, and could “push” the driver a digital coupon.

Ploucha pointed to the GasBuddy mobile app, which already uses a user’s location to find the cheapest gas. He says if GasBuddy could connect with your car so it knew how thirsty it was and how much gas remained in the tank, it could send a push-alert as you approach a station with the cheap gas.

The “digital signature” that identifies your car will track your patterns and remember your habits, just like pop-ups on your smartphone remember you were shopping for sneakers a few weeks ago. “This is no different,” Ploucha said, “than browsing for whatever it is you’re looking for on Amazon.”

It helps to think of a car as a big smartphone on wheels.

In the same way Apple and Samsung modify the next generation of phones based on data about how people use the devices, experts on automotive data say that patterns such as how fast you drive, how hard you brake or how much you drive are already used for improvements.

The link to the full story is broken. All of this data collection could have a positive effect on our lives, if and only if the individual retains control over who has access to that data, and what portions they are allowed to access. Technocrats will not tolerate such limitations. We do not and never have had a right to privacy. That’s the wrong discussion. What is being taken from us is much more important. We are losing the ability to compartmentalize our lives. We don’t share the same information about ourselves with our grocer that we do with our… Read more »

Thank you for the heads up! It is fixed now…

MAY 6, 2017 Are Microwave Industries And Utilities Operating The Way Talcum Powder Makers Obfuscated?

If non-thermal microwave adverse effects have been known since the 1930s, plus 32 percent of the microwave industry’s own research found non-thermal effects—that’s proof alone they exist, certainly the microwave industry is in the same culpable league as Johnson & Johnson and, therefore, culpability applies legally and financially for fraud, negligence and conspiracy, plus denial and subversion of scientific facts, I offer.