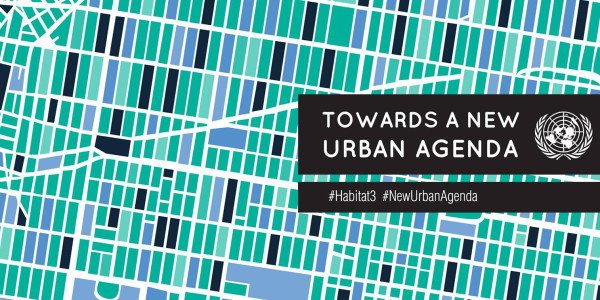 Everything the UN ‘learned’ from lesser organizations like ICLEI in the past will now become standard policy for all cities in all nations. The ambition of the Technocrat-filled United Nations knows no bounds. ⁃ TN Editor

From October 17-20, 2016, the United Nations, led by UN-Habitat, will host the Habitat III Conference in Quito, Ecuador. This conference, held every 20 years, will bring together representatives from nations around the world to decide on the “New Urban Agenda” establishing the policy frameworks that will guide the governance of the world’s cities for the coming 20 years. The previous Habitat conference was held in 1996 in Istanbul, Turkey and had two main themes: “Adequate shelter for all” and “Sustainable human settlements development in an urbanizing world.”

In the context of major changes to technology and globalization within the last 20 years, the New Urban Agenda generates an opportunity to reimagine the world’s urban future. As academic David Satterthwaite notes, “given the very poor housing and living conditions and lack of basic services suffered by so much of the urban population in low- and middle-income countries, there is a very serious need for new approaches.” However, he also notes that there is a distinct vagueness to the New Urban Agenda. “No one is actually sure what it is,” he says.

These questions are incredibly important for a city like Rio de Janeiro, where urban transformations around the hosting of the World Cup and Olympics have dramatically altered the city’s landscape. A city that once denounced the favelas as “aberrations,” but then largely decided on a policy of acceptance and attempted urban upgrades, has in recent years returned to using removal as a commonplace policy option. The administration of Eduardo Paes has removed more residents in favelas than any other mayor. So what exactly does the New Urban Agenda say about the future of informal settlements, and what, in particular, does Rio de Janeiro have to learn and contribute to this discussion? Below is a summary of the main themes of the New Urban Agenda.

Governments need to be more responsive, committed, and accountable to citizens

The New Urban Agenda recognizes that the limiting factor to successful urban development is often a lack of government accountability. As early as clause 14 in the draft, the document states that “to achieve our vision, we resolve to adopt a New Urban Agenda guided by the following interlinked principles: … Leave no one behind, by ending poverty in all its forms and dimensions… Sustainable and inclusive urbanization… Environmental sustainability, by promoting clean energy, sustainable use of land and resources in urban development…”The focus is thus on combating poverty and inequality, and strengthening urban environments. From clauses 24 to 80 each of the three commitments is explained in more detail. For example, in clause 27, the New Urban Agenda affirms the pledge to “enable all inhabitants, whether living in formal or informal settlements, to lead decent, dignified, and rewarding lives and to achieve their full human potential,” a clause particularly salient in Rio.

The draft also acknowledges in clause 48 that in order to have inclusive “urban prosperity,” cities must “develop vibrant, sustainable, and inclusive urban economies, building on endogenous potentials, competitive advantages, cultural heritage and local resources, as well as resource-efficient and resilient infrastructure, promoting sustainable and inclusive industrial development, and sustainable consumption ad production patterns, and fostering an enabling environment for businesses and innovation, as well as livelihoods.” To make this possible, the document stresses numerous times the importance of “full and meaningful participation” and “people-centered urban development” in the planning process.

Cities must concentrate on growing their competitiveness equitably for their residents

A central focus in the New Urban Agenda is on adapting to globalization and urbanization through taking advantage of “sustainable and inclusive urban economies, by leveraging the agglomeration benefits of well-planned urbanization, high productivity, competitiveness, and innovation; promoting full and productive employment and decent work for all, ensuring decent job creation and equal access for all to economic and productive resources and opportunities; preventing land speculation; and promoting secure land tenure and managing urban shrinking when appropriate.”

There is a growing commitment to the “Right to the City”

In clause 11 of the draft, the document acknowledges the “Right to the City,” which it says means that cities should be built for all of their inhabitants. Within the New Urban Agenda, this means “equal use and enjoyment of cities and human settlements, seeking to promote inclusivity and ensure that all inhabitants, of present and future generations, without discrimination of any kind, are able to inhabit and produce just, safe, healthy, accessible, affordable, resilient, and sustainable cities and human settlements, to foster prosperity and quality of life for all.” It is important to note that the Zero Draft of the New Urban Agenda included numerous references to “equity” in cities, but the final draft includes this word just once. The New Urban Agenda envisions cities and human settlements as “fulfill[ing] their social and ecological function and the social function of land,” committing cities to implementing funding mechanisms and policy frameworks that minimize land speculation in clause 111.

Here is a real problem with that in the United States. People who are educated and in professional careers (aka taxpayers and spenders) have zero interest in now nor ever living in urban cities. Everyone knows that.