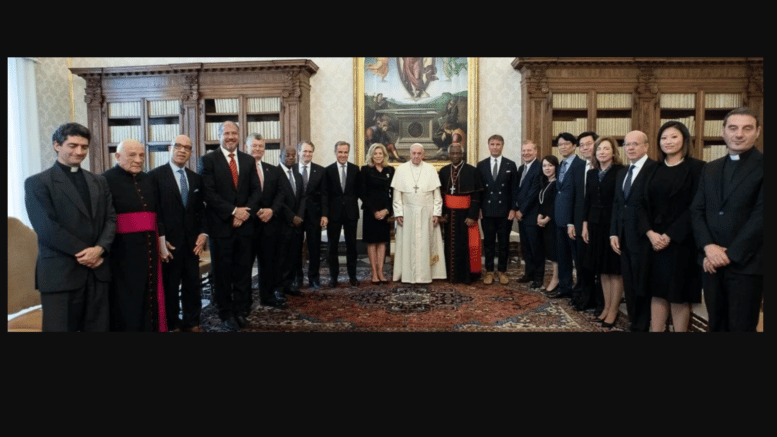 The Guardians, Council For Inclusive Capitalism

Please Share This Story!
PDF 📄
Warning: Technocracy is NOT Capitalism and is, in fact, its polar opposite. The two are mutually exclusive. So, why has the Pope introduced a new name for Sustainable Development, aka Technocracy? Because it is the ultimate deception to lure people into accepting a “remake” of capitalism while the intent is to murder it. This is comparable to the mythological Sirens of Greece calling out to passing ships and luring them to their doom. ⁃ TN Editor

The idea that there is an agenda for global government among the financial and political elites of the world has long been called a “conspiracy theory” within the mainstream and the establishment media. And sadly, even when you can convince people to look at and accept the evidence that banking institutions and certain politicians work together for their own purposes, many folks will STILL not entertain the notion that the ultimate goal of these power mongers is one-world empire. They just can’t wrap their heads around such a thing.

People will say that the establishment is driven by greed alone and that their associations are fragile and based only on individual self interest. They will say that crisis events and shifts in social and political trends are random, not the product of deliberate engineering. They will say that elitists will never be able to work together because they are too narcissistic, etc.

All of these arguments are a coping mechanism for the public to deal with evidence they cannot otherwise refute. When the facts become concrete and the powers-that-be admit to their schemes openly, some people will revert to confused denial. They don’t want to believe that organized evil on such a scale could actually be real. If it did, then everything they thought they knew about the world might be wrong.

For many years the agenda for global governance was only whispered about within elitist circles, but every once in a while one of them would speak aloud in public about it. Perhaps out of arrogance or perhaps because they felt the time was right to ease the populace into accepting the possibility. Whenever they did mention it, they called it the “New World Order.” World leaders from George HW Bush to Barack Obama to Joe Biden to Gordon Brown to Tony Blair and beyond have all given speeches talking about the “New World Order.” Money and political elites like George Soros and Henry Kissinger have mentioned the NWO incessantly over the years.

One of the most revealing quotes on the agenda comes from Clinton Administration Deputy Secretary of State Strobe Talbot, who stated in Time magazine that:

“In the next century, nations as we know it will be obsolete; all states will recognize a single, global authority… National sovereignty wasn’t such a great idea after all.”

He adds in the same article a lesser known quote:

“…The free world formed multilateral financial institutions that depend on member states’ willingness to give up a degree of sovereignty. The International Monetary Fund can virtually dictate fiscal policies, even including how much tax a government should levy on its citizens. The General Agreement on Tariffs and Trade regulates how much duty a nation can charge on imports. These organizations can be seen as the protoministries of trade, finance and development for a united world.”

To understand how the agenda works, I offer a quote from globalist and Council on Foreign Relations member Richard Gardner in an article in Foreign Affairs Magazine in 1974 titled ‘The Hard Road To World Order’:

“In short, the “house of world order” will have to be built from the bottom up rather than from the top down. It will look like a great “booming, buzzing confusion,” to use William James’ famous description of reality, but an end run around national sovereignty, eroding it piece by piece, will accomplish much more than the old-fashioned frontal assault.”

The “NWO” has since changed names multiple times as the public grows increasingly wise to the conspiracy. It’s been called the Multilateral World Order, the 4th Industrial Revolution, the “Great Reset,” etc. The names change but the meaning is always the same.

In the past two years in the face of extensive global crisis events the “new order” establishment globalists have been talking about has arrived, and with almost no fanfare or mention in the mainstream media. The beginnings of global government already exist, and it’s called the “Council For Inclusive Capitalism.”

Lately, many analysts myself included have been highly focused on the World Economic Forum and their role in the global government agenda. Mainly because WEF head Klaus Schwab is such a loudmouth and he can’t help but talk about future plans for centralization.

As I have noted in past articles, the elites within the WEF got way too excited about the covid pandemic, thinking that they had the perfect crisis to implement numerous globalist policies in the form of the Great Reset. As it turned out, covid was nowhere near as deadly as they initially predicted during Event 201, and the public was not as submissive and compliant as they had hoped we would be. The WEF let the cat out of the bag too soon.

So, onward we go, with crisis after crisis like dominoes falling until we get to the one event that they think will drive the masses to accept world governance. And while the WEF is regularly attended by top level globalists, they are more of a high level think-tank, the Council for Inclusive Capitalism appears to be about implementation rather than theory.

The founder of the group is Lynn Forester de Rothschild, member of the infamous Rothschild Dynasty that has long been monetarily involved in influencing governments for generations. Pope Francis and the Vatican publicly aligned with the council in 2020, and one of the primary narratives of the CIC is that all religions must unite with the leaders of capital to build a society and an economy that is “fair for all.”

This mission statement is rather familiar, as it echoes the goals of the WEF and its concept of the “Shared Economy”: A system in which you will own nothing, have no privacy, borrow everything, be completely reliant on the government for your survival and you will “like it.”

In other words, the purpose of “inclusive capitalism” is to con the masses into accepting a rebranded version of communism. The promise will be that you won’t have to worry anymore about your economic future, but the cost will be your freedom.

The CIC is led by a core group of global leaders they refer to as “The Guardians” (No, I’m not joking, this is real).

Members of the CIC have included: Mastercard, Allianz, Dupont, the UN, the Teachers Insurance and Annuity Association of America (TIAA), CalPERS, BP, Bank of America, Johnson & Johnson, Visa, the Rockefeller Foundation, the Ford Foundation, Mark Carney, the Treasurer of the State of California and many more companies around the world. The list is extensive, but what it represents is a kind of corporate led government with a congress of corporate representatives mixed with pliable political leaders.

One of the top missions of the CIC has been to change our economic models to “promote equity and inclusion.” Hilariously, proponents of the CIC argue that “too much wealth has been accumulated into the hands of too few people and this proves that existing capitalism does not work, yet THEY are the very people that rigged the system to centralize that wealth into THEIR HANDS. They aren’t “capitalists,” they are an aristocracy. Do you really think that these people are going to build a whole new system that doesn’t continue to benefit them?

If you have ever wondered why the Pope has been pushing woke ideology, climate alarmism and one world religion rhetoric in conflict with traditional Christian doctrine, this is why – He’s following the dictates of the CIC.

Another mission of the CIC is to enforce carbon controls and taxation in the name of “climate change” with the purpose of reaching “net-zero” emissions. As we all know, net zero carbon will be impossible without a complete upheaval of our economy and industry, along with the deaths of billions of people in the process. It is an unattainable scenario, which is why it is perfect for the globalists. Humans are the enemy of the Earth, they claim, so we need to let the elites control our every action to ensure we don’t destroy the planet and ourselves, and the process will never end because there will always be carbon emissions to deal with.

Members of the CIC, including the head of Bank of America, openly suggest that they don’t actually need governments to cooperate in order to meet their goals. They say corporations can implement most social engineering without political aid. In other words, it is the every definition of “shadow government” – A massive corporate cabal that works in tandem to implement social changes without any oversight. As noted, we’ve already seen this with the spread of woke ideology by hundreds if not thousands of corporations working as a hive.

Is the CIC the final form of global government? No, probably not. But, it is the beginning of it; a government by corporations and money elites for corporations and money elites. It bypasses all political representation, all checks and balances and all voter participation. It is conglomerates and their partners making decisions for our society unilaterally and in a centralized fashion. And, since big business acts as if they are separate from government rather than partners with government, they can claim they are allowed to do whatever they please.

However, with corporations and globalists increasingly showing their true colors and acting as if they should be in charge, the public must hold them accountable as if they are part of government. And if they are found to be authoritarian and corrupt, they must be overthrown like any other political dictatorship.

They are all worshiping at the alter of the almighty DOLLAR; Vatican included. Reading in between the lines I read how God foils their plans.

LIES, LIARS, LIARS, LIARS. Not a single word of what they tout is true. ALL FALSE BULL. I’m very, very tired of all of them. The Pope can kiss my…well, you have the idea.