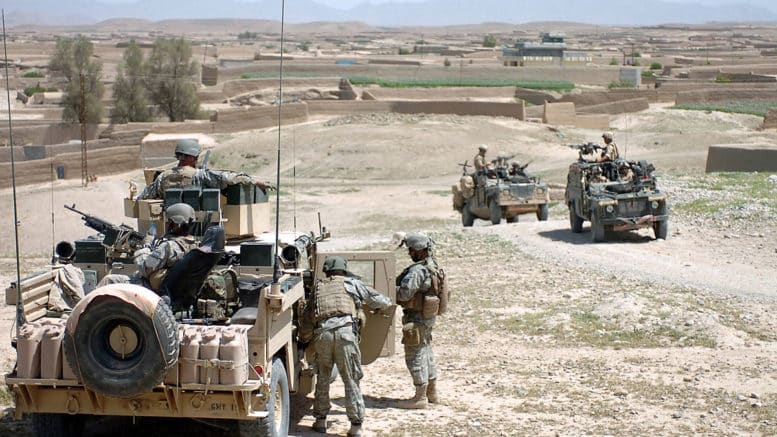 Please Share This Story!
PDF 📄
Whatever AI is to civilian populations, to a war zone it is killing on steroids, and could play the central role in our so-called ‘forever wars’ like Afghanistan. ⁃ TN Editor

The US military is creating a more automated form of warfare – one that will greatly increase its capacity to wage war everywhere forever.

ast month marked the 17th anniversary of 9/11. With it came a new milestone: we’ve been in Afghanistan for so long that someone born after the attacks is now old enough to go fight there. They can also serve in the six other places where we’re officially at war, not to mention the 133 countries where special operations forces have conducted missions in just the first half of 2018.

The wars of 9/11 continue, with no end in sight. Now, the Pentagon is investing heavily in technologies that will intensify them. By embracing the latest tools that the tech industry has to offer, the US military is creating a more automated form of warfare – one that will greatly increase its capacity to wage war everywhere forever.

On Friday, the defense department closes the bidding period for one of the biggest technology contracts in its history: the Joint Enterprise Defense Infrastructure (Jedi). Jedi is an ambitious project to build a cloud computing system that serves US forces all over the world, from analysts behind a desk in Virginia to soldiers on patrol in Niger. The contract is worth as much as $10bn over 10 years, which is why big tech companies are fighting hard to win it. (Not Google, however, where a pressure campaign by workers forcedmanagement to drop out of the running.)

At first glance, Jedi might look like just another IT modernization project. Government IT tends to run a fair distance behind Silicon Valley, even in a place as lavishly funded as the Pentagon. With some 3.4 million users and 4 million devices, the defense department’s digital footprint is immense. Moving even a portion of its workloads to a cloud provider such as Amazon will no doubt improve efficiency.

But the real force driving Jedi is the desire to weaponize AI – what the defense department has begun calling “algorithmic warfare”. By pooling the military’s data into a modern cloud platform, and using the machine-learning services that such platforms provide to analyze that data, Jedi will help the Pentagon realize its AI ambitions.

The scale of those ambitions has grown increasingly clear in recent months. In June, the Pentagon established the Joint Artificial Intelligence Center (JAIC), which will oversee the roughly 600 AI projects currently under way across the department at a planned cost of $1.7bn. And in September, the Defense Advanced Research Projects Agency (Darpa), the Pentagon’s storied R&D wing, announced it would be investing up to $2bn over the next five years into AI weapons research.

So far, the reporting on the Pentagon’s AI spending spree has largely focused on the prospect of autonomous weapons – Terminator-style killer robots that mow people down without any input from a human operator. This is indeed a frightening near-future scenario, and a global ban on autonomous weaponry of the kind sought by the Campaign to Stop Killer Robots is absolutely essential.