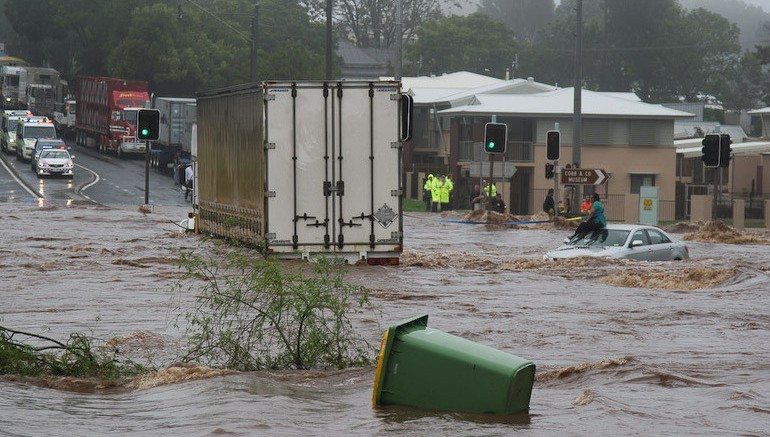 TN Note: From an economist point of view, stories like this are aggravating because they are completely bogus. There may well be $158 Trillion that will change hands in the future, from rich nations to poor nations. However, if history is any guide, most of that money will never reach its intended audience. Rather, it will be gobbled up by global corporations, middlemen and corrupt politicians. This story has repeated many times over the last 40 years. The scam is to “free” the frigid funds and cause them to float so that they can be plundered.

The global community is badly prepared for a rapid increase in climate change-related natural disasters that by 2050 will put 1.3 billion people at risk, according to the World Bank.

Urging better planning of cities before it was too late, a report published on Monday from a Bank-run body that focuses on disaster mitigation, said assets worth $158tn – double the total annual output of the global economy – would be in jeopardy by 2050 without preventative action.

The Global Facility for Disaster Reduction and Recovery said total damages from disasters had ballooned in recent decades but warned that worse could be in store as a result of a combination of global warming, an expanding population and the vulnerability of people crammed into slums in low-lying, fast-growing cities that are already overcrowded.

“With climate change and rising numbers of people in urban areas rapidly driving up future risks, there’s a real danger the world is woefully unprepared for what lies ahead,” said John Roome, the World Bank Group’s senior director for climate change.

“Unless we change our approach to future planning for cities and coastal areas that takes into account potential disasters, we run the real risk of locking in decisions that will lead to drastic increases in future losses.”

The facility’s report cited case studies showing that densely populated coastal cities are sinking at a time when sea levels are rising. It added that the annual cost of natural disasters in 136 coastal cities could increase from $6bn in 2010 to $1tn in 2070.

The report said that the number of deaths and the monetary losses from natural disasters varied from year to year, but the upward trend was pronounced.

Although developed countries have been responsible for the bulk of historic global emissions, poorer countries are more vulnerable to the impact of climate change and they demanded financial help from the west as part of last December’s breakthrough global deal to reduce emissions.

Oxfam this week called on rich countries to make good on the pledges made at the Paris conference to provide the funding to help developing countries adapt to the effects of global warming.

“Climate change is a brutal reality confronting millions of the world’s most vulnerable people. Their need for financial support to adapt to climate extremes is urgent and rising,” Oxfam said in its Unfinished Business report.