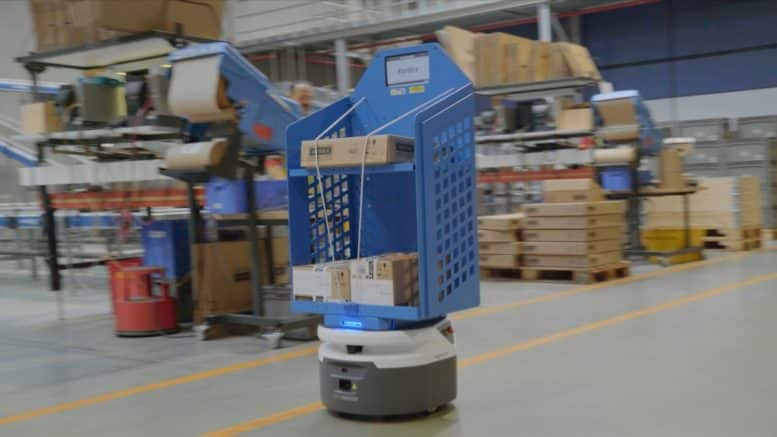 Please Share This Story!
PDF 📄
Warehouses provide millions of jobs to otherwise unskilled workers. Many of the displaced workers will join the ranks of ‘unemployables’, hoping only for Universal Basic Income to keep them alive. ⁃ TN Editor

More than 4 million commercial robots will be installed in over 50,000 warehouses by 2025, according to a report by ABI Research.

The 50,000 figure represents a massive expansion of the market from the current situation in which an estimated 4,000 warehouses were found to be using robots in 2018.

ABI says the rapid rate of adoption will be driven by the need for flexible, efficient, and automated e-commerce fulfillment as same-day delivery becomes the norm.

Global adoption of warehouse robotics will also be spurred by the increasing affordability and return on investment of a growing variety of infrastructure-light robots as they are an attractive and versatile alternative to traditional fixed mechanical automation or manual operations.

“Robots enable warehouses to scale operations up or down as required while offering major efficiency gains and mitigating inherent challenges associated with labor and staffing.”

Robot vendors, such as Fetch, Geek Plus Robotics, and inVia, enable additional robots to be added to or removed from a fleet as operational demands require.

This is a major advantage in the unpredictable and dynamic e-commerce market, says ABI.

Economically viable mobile manipulation robots from the likes of RightHand Robotics and Kindred Systems are now enabling a wider variety of individual items to be automatically picked and placed within a fulfillment operation.

By combining mobile robots, picking robots, and even autonomous forklifts, fulfillment centers can achieve greater levels of automation in an efficient and cost-effective way.