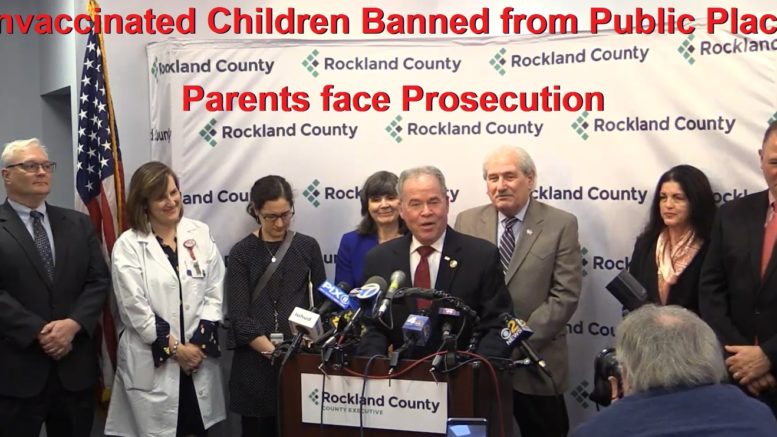 One county in New York is taking extremely drastic measures in an attempt to force all children to get vaccinated for measles. Starting on Wednesday, any child that has not received the measles vaccine will be banned from all public places. That means that they will not be able to go to school, to church or to any store. In fact, just walking down the sidewalk will be a violation of this countywide “state of emergency”. Rockland County has essentially declared a state of medical martial law, and it is scheduled to last for the next 30 days…

Rockland County declared a countywide State of Emergency relating to the ongoing measles outbreak — the longest outbreak since the disease was eradicated in the United States in 2000, according to officials.

Effective at the stroke of midnight, Wednesday, anyone who is under 18 years of age and unvaccinated against the measles will be barred from public places until this declaration expires in 30 days or until they receive the MMR vaccination.

So what has caused Rockland County to go to such extremes?

According to Rockland County Executive Ed Day, something had to be done because there have been 153 confirmed cases of measles in the county.

Anyone found in violation of the declaration could spend six months in jail and/or a $500 fine, Day said. However, Day said the county is not looking to arrest people, but rather a means to grab the public’s attention.

According to Day, county officials have been met with “pockets of resistance” from people unwilling to comply with health department advise and this played a part in the declaration.

Of course other communities all across America will be watching to see how the people of Rockland County respond to this declaration of medical martial law. If there is no uproar, it will set a very important national precedent, and inevitably other local governments around the nation will try the exact same thing.

And where will it stop?

Will all vaccines eventually be forced upon us in such a manner? The following comes from Natural News…

Notably, the government can mandate new vaccines at any time, then claim those new vaccines must also be injected into everyone at gunpoint, then banning those who don’t comply from leaving their own homes. Effectively, this new mandate makes people prisoners in their own homes unless they obey the government’s insane, anti-science vaccination mandates rooted in Big Pharma corruption and the routine bribery of doctors and public health officials.

We live at a time when our most basic health freedoms are under attack. If we don’t stand up now, we will lose them forever.

More scientific research is coming out all the time that is showing that there are very serious safety concerns regarding our vaccines.

For example, a study that was just released found a clear link between autism and aluminum in vaccines…

Autistic children have up to 10 times more of the metal in their brains than what is considered safe in adults, a study found.

Aluminium crosses the membrane that separates the brain from circulating blood and accumulates in cells involved in maintaining a constant internal environment, such as temperature, the research adds.

Study author Professor Chris Exley from Keele University, said: ‘Perhaps we now have the link between vaccination and autism spectrum disorder (ASD), the link being the inclusion of an aluminium adjuvant in the vaccine.’

In her blog, Attkisson cites a buried JAMA study from almost a decade ago which showed that there was no improvement in mortality rates among senior citizens with a flu vaccine, even after greatly increased vaccination rates. The study “got little attention,” she says, “because the science came down on the wrong side.” Whereas the researchers had set out to prove that the push for massive flu vaccination would save the world, the researchers were “astonished” to find that the data did not support their presupposition at all. The data actually shows that deaths increased, not decreased, among seniors following vaccination.

When are we going to wake up?

During the drug trials for one flu vaccine that is being specifically marketed to seniors this year, a total of 23 seniors actually died…

The high-dose Fluzone vaccine being marketed this flu season to seniors, which has four times the amount of antigens that the regular flu shot has, as well as the non-high dose version, had 23 seniors die during drug trials.

But of course that flu vaccine got put on the market anyway, and we may never know how many seniors have died as a result.

Many doctors will privately admit that people die from vaccine reactions, but they insist that the “benefits” outweigh the costs.

To me, there is no possible “benefit” that can outweigh this high of a cost…

I watched every mother’s nightmare unfold yesterday in a conversation on a local online mom’s group. It began when the baby’s aunt asked frantically for prayers for her nephew, who had gotten his four-month shots that day and was found unresponsive in the evening. Then we learned the baby had apparently bled from every orifice and had swelling of the brain. The aunt shared that they kept the baby “alive” to give family time to arrive at the hospital. And then, the baby died.

The aunt told us the probable diagnosis was SIDS. When the family questioned the doctor about whether the vaccines (pneumococcal, H. influenza (HIB), rotavirus, diphtheria, pertussis, tetanus (DTaP) and polio, and perhaps hepatitis B if he had not yet received that at birth) administered just hours before could have caused this massive organ failure and death, the doctor denied the possibility of any causal relationship between the baby’s death and the vaccinations he was given.

What Rockland County is doing is unconscionable, and they should be completely and utterly ashamed of themselves.

Health freedom is not just a political issue. It is literally a battle over life and death, and it is a battle that we cannot afford to lose.

Does this ban include all the children of illegal aliens who are bringing a myriad of diseases into our country via unlawful entry, including drug-resistant tuberculosis, mumps, measles, Chagas, foot and mouth disease, Dengue fever, parasitic infections, et al.?

You totally missed the point while you were making your anti-illegal alien rant.