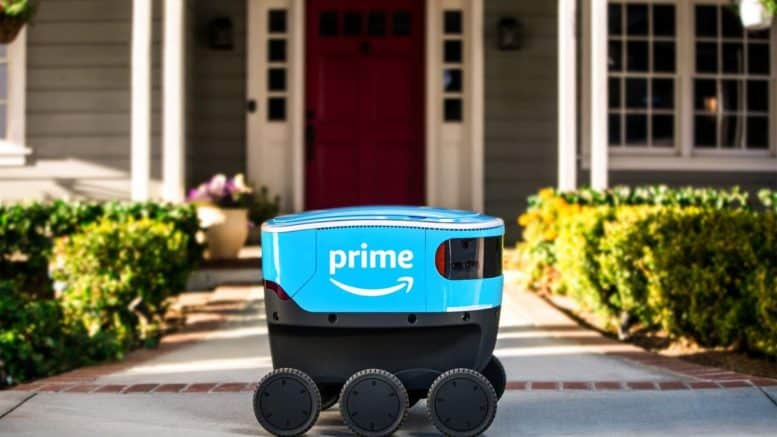 Please Share This Story!
PDF 📄
There are about 1.5 delivery truck drivers in America who will not be too happy over delivery robots. However, the odds favor rejection by people living in neighborhoods where these are turned loose. ⁃ TN Editor
Amazon.com Inc. will use robots to deliver packages in the suburbs north of Seattle, its latest experiment to automate the last-mile of delivery that’s a labor-intensive and costly component of buying products online.

The e-commerce giant on Wednesday announced a trial of “Amazon Scout,” autonomous delivery devices the size of a cooler that roll along sidewalks at a walking pace. It will use six robots, which are designed to navigate around obstacles such as people and pets, to deliver packages in Snohomish County. The robots will be used to make deliveries Monday through Friday during daylight hours.

Using robots to make deliveries outside on city streets will be much more challenging than most current common uses, such as moving items around in warehouses, hospitals and hotels that are well-lit and have level floors, said Dan Kara, vice president of robotics at WTWH Media. Outside, robots encounter extreme weather conditions, steep inclines, curbs and other problems that present significant engineering challenges.

“These might work in a brand new neighborhood that is well lit and has new sidewalks, but most of the world isn’t like that and neither is most of the United States,” Kara said. “Congratulations for experimenting, but in terms of full implementation, I don’t see that any time soon.”

Amazon already uses robots to move inventory in its vast network of warehouses and has been working on delivery by autonomous drone for years. The experiment brings the technology to a job mostly handled by people, including drivers with United Parcel Service Inc. and the U.S. Postal Service. About 1.4 million people were employed as delivery truck drivers in 2016, according to the Bureau of Labor Statistics. Amazon last year launched a program to encourage people to start their own businesses delivering packages in vans to help expand capacity and reduce its reliance on UPS and FedEx Corp.