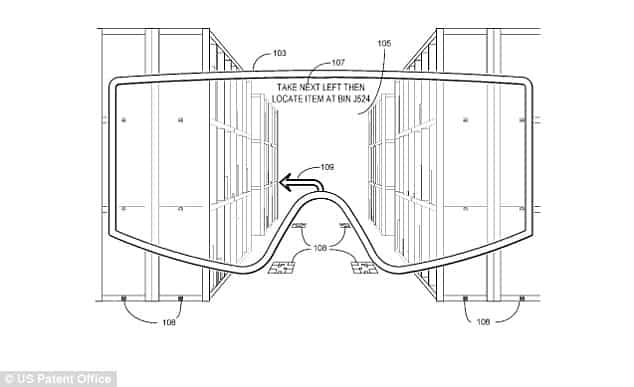 Amazon will turn employees into vessels of autonomous guidance if its latest patent is implemented. Micro-management and direction of the smallest actions promise to dehumanize employees and strip any vestige of privacy. Unfortunately, employees are in no position to fight Amazon. ⁃ TN Editor

Amazon has patented a pair of augmented reality goggles that could be used to keep a close eye on its employees.

A newly filed patent describes a ‘wearable computing device’ that would overlay turn-by-turn directions on the goggles’ screen, showing employees where to place certain objects in one of Amazon’s fulfillment centers.

However, the goggles laid out in the patent have raised the ire of privacy advocates who believe they could be used for far more nefarious purposes, such as tracking employees’ every move.

Amazon has previously come under fire for the working conditions at its fulfillment warehouses, with employees complaining that they’re sometimes unable to get a break during the day, even to go to the restroom.

A patent describes a ‘wearable computing device’ that would overlay turn-by-turn directions on the screen, showing employees where to place objects in Amazon’s fulfillment centers

Amazon defended the patent application, saying it has ‘nothing to do’ with surveilling employees.

‘Technology has empowered and enabled workplaces throughout human history,’ an Amazon spokesperson said in a statement.

‘We are always thinking of ways that innovation can further improve the employee experience – such as this conceptual idea for augmented reality glasses that would free up fulfillment center associates’ hands from carrying the hand-held scanners commonly used in warehouses around the world to locate items for customers.

The patent was filed in March 2017, but just became publicly available on Thursday.

The goggles would connect to a computing device that’s worn on the employee’s body, which powers the turn-by-turn data.

In addition to turn-by-turn directions, the glasses may also display specific instructions for workers, such as ‘remove orange box from shelving unit on the left’

In addition to turn-by-turn directions, the glasses may also display specific instructions for workers, such as ‘remove orange box from shelving unit on the left.’

It may also instruct workers to place a particular item in a specific location in the warehouse.