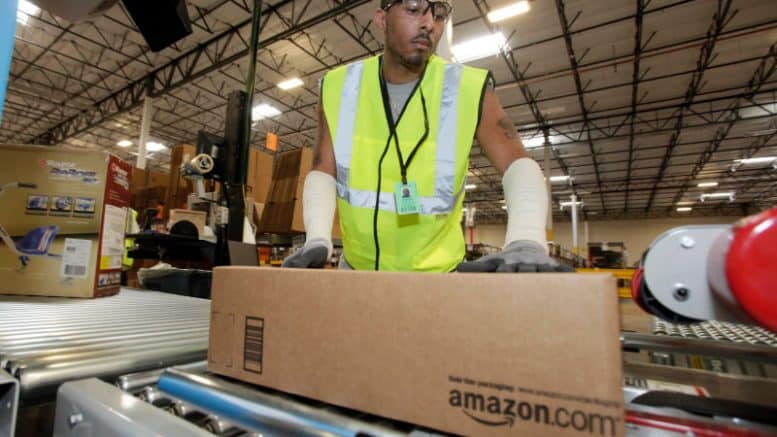 Please Share This Story!
PDF 📄
Imagine a society that is run like an Amazon warehouse: every move recorded and analyzed by AI for instant correction. “Do what we say immediately, or you are terminated.” These Technocrat slavers are the same people who are engineering society to be subservient to their twisted, inhuman ideology. Is this the future you want? ⁃ TN Editor

Infamously, Amazon punishes and sometimes fires warehouse workers who it believes are wasting time at work. A new filing obtained by Motherboard gives detailed insight into how Amazon tracks and records every minute of “time off task” (which it calls TOT) with radio-frequency handheld scanners that warehouse associates use to track customer packages.

The documents, filed with the National Labor Relations Board as part of a dispute at the recently-unionized Amazon warehouse in Staten Island called JFK8, reveal that workers can receive a written warning for accumulating 30 minutes of time off task in a day one time in a rolling one year period. They can be fired if they accumulate 120 minutes of time off task in a single day or if they have accumulated 30 minutes of time off task on three separate days in a one year period. Examples and sample spreadsheets provided in the documents show Amazon tracking, down to the minute, the amount of time individual workers spent in the bathroom and infractions such as “talking to another Amazon associate,” going to the wrong floor of a warehouse, and, as an example, an unaccounted for 11-minute period where a worker “does not remember” what they were doing.

A set of guidelines for TOT reveals that Amazon asked managers at JFK8 in 2019 to use a tracking tool every shift to identify a “top offender,” the person who accumulated the most time off task in a shift as calculated by inactivity on their item scanner. The manager was then required to ask the top offender about their whereabouts for each time stamp registered in the system as unproductive, and discipline them when appropriate. Each shift “managers will use the TOT tool to identify and engage the top offender per manager,” the guidelines say. As an example of this, Amazon shows a summary of how a manager might ask their employees to account for how long they used the bathroom at a certain time of day: “Amazon Associate understands the process. AA stated he was in the bathroom for the 10 TOT. Coached AA on the TOT policy.” The New York Times first reported that Amazon tracks TOT “top offenders” at JFK8.

While Amazon managers were trained to write up the “top offender” per shift, they could interrogate at least three workers about their whereabouts per shift, the documents show. A template for a worker who registered 47 minutes of time off task on March 17, 2019 shows that Amazon’s tool registered the five blocks of time as TOT. Subsequently a manager asked the worker for an explanation for what they were doing during each block of time.

In one of the documents, Amazon explains the purpose of its TOT policy to associates, saying workers’ “commitment to completing assigned tasks is critical in order to be Earth’s most customer-centric company.”

Motherboard also obtained an internal list of 18 warehouse workers at JFK8 who were terminated for accumulating more than two hours of TOT in a single day between January 1, 2020 and February 25, 2020.

The documents provide new clarity about a much-talked-about but until now opaque process that is used to surveil, discipline, and sometimes terminate Amazon warehouse workers around the United States. Amazon warehouse workers who have talked to Motherboard say they don’t have insight into how much TOT they’ve accumulated, and have said they skip water and bathroom breaks because they fear being disciplined and terminated. As the country’s second largest employer, Amazon’s productivity policies impact hundreds of thousands of workers.

Hey you unions out there, where are you?

Unions sell sold you out on Sunday at Golf Course with Corp.
Backroom Deals not much diff than politicians and lawyers, it’s a act.
sincerely retired teamster.

Almost makes one wonder if Jeff is working out the bugs for a forced labor system to support an intergalactic commercial trading operation. Nah… that’s too over the top.

[…] Read more: Amazon’s Dystopian System for Tracking Workers Every Minute of Their Shifts […]

[…] Read more: Amazon’s Dystopian System for Tracking Workers Every Minute of Their Shifts […]

Jeff is working out the bugs for a forced

Pick your butt hole for cameras, send a personalized message to Jeff.