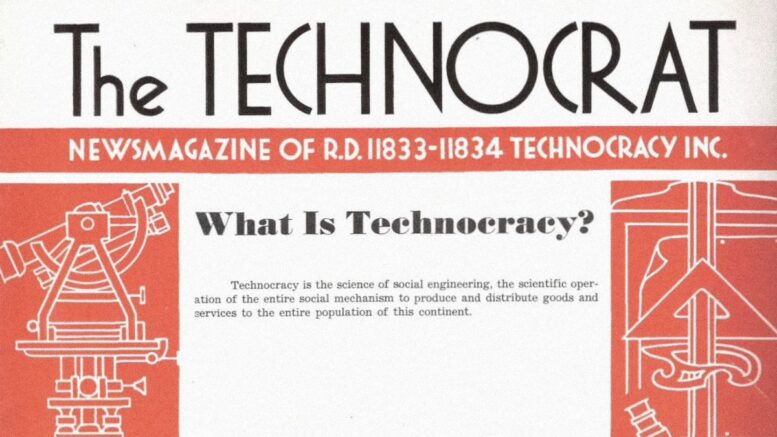 Please Share This Story!
PDF 📄
Journalists and analysts from outside the U.S. have a more clear view of the encroachment of Technocracy than do those in America. It is time for America to get its eyes off of distractions in politics and intrigue, and examine the 800 pound gorilla in the room. ⁃ TN Editor

“We’re not going back to the same economy”, Fed Chair Powell said recently: “We’re recovering, but to a different economy, and it will be one that is more leveraged to technology – and I worry that it’s going to make it even more difficult than it was, for many workers.” Klaus Schwab, the Davos Chair, was more blunt: “Nothing will ever return to the ‘broken’ sense of normalcy that prevailed [earlier]. We … will be surprised by both the rapidity and unexpected nature of these changes – as they conflate with each other, they will provoke cascading effects and unforeseen outcomes”. Schwab makes it clear that the western élite will not allow life to return to normal, suggesting that rolling lockdowns and other restrictions may become permanent.

‘Recovering to a different economy’? Well, actually the creeping ‘coup’ has been residing in plain view for quite a while. The changes have been less noticed – partly because western élites have stuck fast to the free market narrative, whilst incrementally shifting over the decades to an oligarchical economy blossoming alongside the free market economy. Yet it has been an important metamorphose, for it has laid the ground-work for a more fundamental fusion of interests of business oligarchy and government. This fusion used to be called the ‘administrative state’, and was widely practiced in 19th Century Europe.

If we want to understand the roots to this ‘quiet coup’, we need to return to the ethos that emerged from WW2. It was ‘never again’ in terms of that terrible wartime bloodshed, and it encapsulated the notion that the spilt blood should be somehow ‘redeemed’ by moving to fairer, more equitable societies. These latter sentiments turned activist, culminating in the 1960s – an occurrence that frightened U.S. business élites.

The élites moved their ‘counter-revolution’. They lobbied; they lobbied hard, evolving their lobbying enterprise into an ‘industrial scale’ enterprise, employing ‘brigades’ of lawyers and encompassing big money. And now, trillions of dollars are at stake: K Street (the lobbying HQ in Washington) is where the legislative ‘sausage’ is actually assembled, and not the U.S. Congress. It is external to Congress, to whom it is ‘sold’ in a mutually beneficial exchange.

Gradually, one segment of the erstwhile radical Boomers quietly folded themselves into the new Big Corporate ethos, whilst another part entered into politics, eventually going on to become the nation’s political leaders. It is not hard to see how a common zeitgeist might emerge. It is half-heartedly woke, big corporate in outlook, and committed to the notion of élite ‘scientifically administered’ rule.

The point here is that there was never anything inevitable to this American-led ‘quiet’ oligarchic take-over. It was never immutable. It happened in America, as it had ‘happened’ earlier in 19th Century Europe. The Boomer radicals never were true ‘revolutionaries’ – and the oligarchs took advantage of their reticence.

The Boomer influx into the corporate and business world, however, did lay firstly, that key incremental shift towards a fusion of big business to government. Secondly, that fusion is now being consolidated through the programmes of pandemic monetary relief concentrated in the corporate sector. And the third step – today’s U.S. Tech war with China – is both further entrenching Silicon Valley and the corporate oligarchy, as well as opening the prospect to a bigger power-grab that is intended to entrench a small Techno-élite at the head of a global administration and in command of global digital money and assets. This is the Re-Set – it aims to forge the new global order to its advantage.

And so, back to Jerome Powell’s warning of a ‘recovery’ to “a different economy”. It does have a whiff of inevitability to it; that is to say, Powell is presenting the fact that the Fed is now ‘painted into a corner’ – whereas Schwab’s hyping of a ‘welcome paradigm shift’, by contrast, is different – it is an exceptionalist ideology, with nothing inherently inevitable about it. The two should not be confused. But whether Powell likes it or not, in the Coronavirus ‘new normal’, the free market segment of the West’s economy is indeed being systematically destroyed, at the same time that the major portion of stimulus is being channelled to the largest of large multinational corporations, and to systemically important Banks. It will indeed be a different economy. This fusion of government to big business has been reinforced during the pandemic, and that plainly helps facilitate those hoping for a fundamental re-set of the global order. The Tech war is the cherry on the cake – if Silicon Valley succeeds in its bid for Tech hegemony, these U.S. Tech giants will be global political players. They are near that already now.

Will the Technocratic coup succeed? Or, will the ideology – the oligarchic vision – behind it, simply descend into a zero sum game of big power Tech rivalry on a par with 19th Century great power rivalries? Let us recall that those rivalries did not end well. As things presently stand, Tech rivalry between U.S. and China – on account of the fundamental difference between Tech rivalry and ordinary commercial competition – makes a clash quite possible. What then is this inherent quality to Tech that differentiates it from ordinary commerce, and exacerbates the risk of 19th Century style warring?

It is this: Not so long ago, the digital economy was thought to soar above conventional geo-politics. The global Internet, aspiring to be free and open, was seen as a general-purpose technology – as revolutionary and as fungible as the internal combustion engine, and a good in the sense of ‘public commons’. This halcyon chimaera about Tech lingers on amongst the public, even as elements of Tech have assumed the darker function of surveilling, and disciplining society on behalf of ‘big brother’.

Fast forward to today: Data is the new ‘oil’, and has become the strategic commodity that governments are fighting over, trying to protect, defend and even hoard, to the exclusion of others. Every state now feels obligated have its national ‘AI strategy’ in order to ‘refine’ this new crude and to profit from it. If big powers used to fight over oil, today they wrangle (more disceetly perhaps) over data. Taiwan may simply be a pretext, behind which lurks American ambitions to dominate the norms and standards for the next decades.

The optimism spurred by the original internet as a global ‘good’ thus has receded in favor of a rivalrous clash for Technological hegemony – a clash that might easily one day turn ‘hot’. One might have assumed that the next generation of digital technology would continue the Internet pattern as ‘win-win’ for everyone, but it didn’t. Machine learning is different. Machine learning broadly refers to ‘modelling’ that is not pre-programmed – as in having instructions (code) that the computer then executes, but which instead uses a set of AI learning-models which enable the computers themselves to extract patterns from large data sets, and evolve their own algorithms (decision rules). These new algorithms that the machine evolves then are run against new data, problems and questions (which can be highly profitable – such as in Cloud analytics).

These algorithms indeed are useful tools and have their positive aspects. They are not particularly new, and machines are not particularly good at learning. They do not approximate human psyche (nor can they) and models that work well in the laboratory often fail in real life. But in particular areas, where there are good data sets, they can be transformative (i.e. medicine, physics, energy exploration, defence, etc.).

And this is where the dynamics of geo-political rivalry comes to the fore. It is because big data and advanced machine learning systems lashed together constitute a positive feedback loop, where better data feeds better analytics, which in turn, feeds bigger potential returns from other, separate data sets. It has, in short, an accumulative dynamic – more profit, more political heft; more brings forth more. And leaders and laggards in this ‘competition’ usually will be states. It is precisely this – the hunt for a positive feedback loop, and fear of falling behind – that can pull the globe apart, if we let it.

And it is this feedback characteristic in analytics that makes Big Tech rivalry different from normal commercial competition. Data and lightning-fast analytics ultimately will determine military primacy, as well as Tech standards’ leadership. Big Tech companies therefore draw the intense interest of governments, not simply as regulators, but as principal users, funders, and sometimes owners of technology. Hence the oligarchic fusion has a built-in intensifier, in this optic – the fusion of oligarchy and governance interests tightens.

Yet hot rivalry over data and algorithms analytis is not pre-ordained. Again, the point is that the present resort to Tech war reflects precisely a particular way-of-thinking – an ideology. Recently, China’s Global Times published a piece by Xue Li, a director at the Chinese Academy of Social Sciences, which makes exactly this point:

“Based on Christian monotheism, the spirit of Roman law and Greek formal logic, Western civilization largely views problems and world order from the perspective of binary opposition. Therefore, they prefer forming alliances in diplomacy so as to restrain and even assimilate allies through mandatory mechanisms. This allows them to confront and even defeat the non-allies.

“At the same time, they firmly believe that every country must have a similar diplomatic philosophy, so it is necessary to encircle and even disintegrate emerging powers. They not only try to equate the history of Christian expansion … with the universal history of humanity, but also view the diplomatic concept of the Christian civilization over past 500 years as the world’s universal diplomatic philosophy. They do not realize that 500 years is a relatively short period in the history of human civilization, and that different civilizations have different views on diplomacy world order.”

Xue is right. The Tech narrative is being inflated and weaponised both to serve the western binary, adverserial mindset, but secondly too, to advance the notion of the scientifically administered, progressive state, representing the political essence of modernity, to which Europe has hewed since Napoleonic times. It is, as Xue points out, a particularly parochial (and dangerous) view.