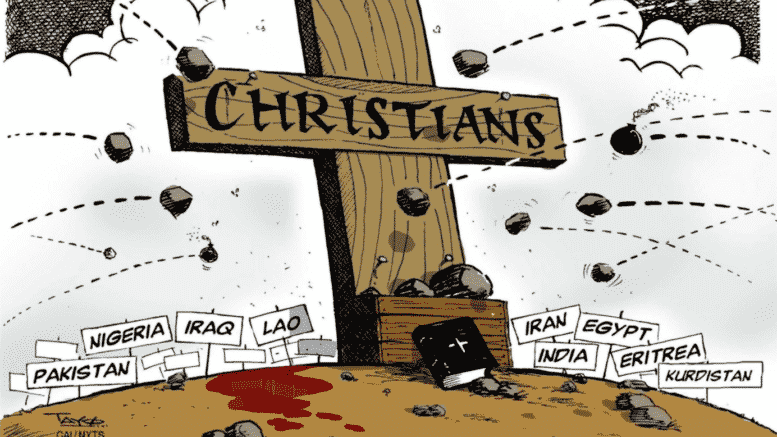 Posted By: Alice Giordano via The Epoch Times January 21, 2022

Please Share This Story!
PDF 📄
Technocracy is a natural enemy of religion because it presents truth outside of science. Much of the resistance against Technocrats and vaccine mandates comes from religious groups and especially those affiliated with Christianity. Data collection of religious exemption requests of employees and contractors across the entire Biden Administration presages a purge of Christians from public service. ⁃ TN Editor

At least 25 federal agencies have implemented a system to track religious exemption requests for mandated vaccines, according to a review of Federal Register notices by The Epoch Times.

The agencies include the departments of Justice, Health and Human Services, Housing and Urban Development, Transportation, the Treasury, the Social Security Administration, the Federal Election Commission.

The Heritage Foundation, a conservative group, earlier this week found that 19 agencies were either considering or have already implemented the tracking system. The group warned that the system may be a test pilot plan to monitor all federal workers.

An Epoch Time review of Federal Register notices identified six additional agencies and confirmed that a total of 25 are actively tracking religious exemption requests from employees of federal agencies along with any contractors, consultants, interns, and volunteers associated with them.

Due to the Biden administration’s choice of the little-known Pretrial Services Agency to implement the database, The Heritage Foundation called the system a “test run” for a nationwide database of all religious exemption requests made by federal workers. The Pretrial Services Agency gathers information and makes recommendations about newly arrested defendants in the federal criminal system.

“It is likely the Biden administration is using these agencies to stealth test a policy it intends to roll out across the whole government,” attorneys for the foundation wrote in an analysis of the tracking system.

Notices of the new tracking system were only made public in the Federal Register, the daily journal of the federal government. News of the system drew criticism from conservative officials.

“The Biden Administration must immediately dismantle the Orwellian Database,” Missouri Attorney General Eric Schmitt wrote in a public comment he posted on regulations.gov. “There is no freedom under our Constitution more sacred than the freedom of religious expression and practice.”

He called the move “alarming” and said it had “a chilling effect on a citizen’s exercise of religion.” The attorney general directed his comments specifically to Secretary of Transportation Pete Buttigieg.

“Rather than give the public ample time to weigh in on the advisability or legality of collecting such personal information, the Department of Transportation’s database, in particular, became effective on the day it was published,” Schmitt said.

Agencies announcing the implementation of the tracking system didn’t return requests for comment.

None of the notices published in the Federal Register announcing the tracking systems state why the religious exemptions were being tracked or what the Biden administration plans to do with the information collected.

Just to be accurate not everyone who posts a religious exempt request is a Christian. They post one because it’s their only OUT, in most cases, from the mandated kill-shot due to fascists employers who enforce them.

AND there is a HUGE portion of the USA that will not be vaxed and are religiously affiliated. They simply understand what tyranny looks like and refuse to agree or participate in it. They are not in support of the millennial fascists in Austin, Boulder, Seattle, Portland, LA, NYC, etc.

“Just to be accurate not everyone who posts a religious exempt request is a Christian”. True, but the powers that be believe it. They don’t know what a Christian is. So then, anyone against them is to be destroyed and I have heard their narratives “Christian” (any color) and “White”

It’s clear these lists are for future roundups. “Covid” camps are right around the corner.

Everyone should get approval for either a medical exemption, war crimes or a crimes against humanity exemption from any medicines or vaccines if they want one. People who are not infected with communicable diseases are not responsible for those who catch one.

I find the silence from muslims deafening. It’s my understanding that their religion is against vaccines. Perhaps someone who is muslim can enlighten us as to their stance.